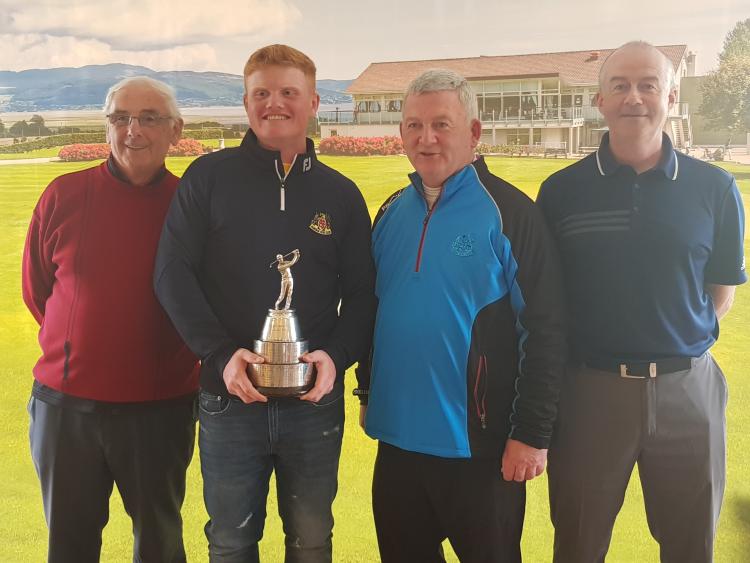 Dundalk Golf Club’s Josh Mackin has followed in the footsteps of Rory McIlroy and Graeme McDowell by capturing the Ulster Boys U18 Championship.

The 17-year-old produced three excellent rounds at Donegal Golf Club to win the 54 hole event by five shots and capture his second provincial title, having won the Leinster Boys U16 title in 2017.

Mackin opened with a five under par 68 to hold the joint lead with Joshua Hill of Galgorm Castle after Round One. He birdied four of the first six holes and had two more down the back nine with his only blemish being a bogey on the par three fifth.

“I was delighted with my opening round mainly because I executed my game plan so well and took advantage of the par 5s, playing them in four under,” said Mackin.

In round two he again got off to a good start with three birdies and a bogey in the first six holes getting him to seven under for the tournament, but he then dropped four shots over the next three holes before recovering down the back nine which he covered in one under par to finish on 74.

That left Mackin second on four under going into the final round. He was one shot behind Hill but was quite happy to be the hunter.

Wet and windy weather coming in off the Atlantic Ocean greeted the players when they teed up for the final round on the Murvagh links and all the leaders struggled over the opening seven holes.

Mackin bogeyed four of the first seven holes to slip back to level par for the tournament and was still one shot behind the leader, but he drew level after Hill bogeyed the par five eighth. After sharing birdies on the par four ninth, the pair split on the 10th where there was a three shot swing. Mackin birdied the par four while Hill double bogeyed it.

Mackin then birdied the par five 12th for the third round in succession as Hill fell away and the Dundalk player parred his way home to finish on three under, the only player in the field to finish under par. He ended up five shots ahead of Fionn Hickey of Muskerry with Seapoint’s Dylan Keating in third on four over.

Mackin, who is now off scratch, was understandably delighted to claim his second provincial Boys title, but admitted that this one was particularly sweet.

“Obviously winning the Leinster U16 title in 2016 was huge for me as it was a monkey off my shoulder, but this victory was very special for me mainly because seven or eight months ago everyone thought I was done with golf and I did too. But t I didn’t want to be remembered in this sort of manner so I decided to keep my head down and put the work in. I always knew that I had talent and it was just about putting it to use.” said Mackin, who paid tribute his coach Leslie Walker and his parents who never lost faith in him.

“I want to thank my parents for all support they have given me and also my coach Leslie Walker. He did a lot of work with me over the last few months but kept things very simple and that certainly suited me. The club have also been very supportive, particularly in the way they make it possible for me and others to play in these tournaments.”

Last week’s win is going to lead to a change in Mackin’s plans for the rest of 2019 as he now plans to play more elite competitions, especially abroad. He will head to Florida in June to try and qualify for the US Junior Amateur and reckons it will be a great test to see where his game is at in relation to the world stage.

“My main objective for this season was to make Boys Home Internationals in Wales this year. Obviously winning a Boys event was also one of my goals but now that I have one in the bank already the main thing is to push on from here and not slack off which could be so easy to do. If I keep the head down, and keep improving, hopefully I will have more success in the near future.”

Kyle Rafferty was the other Dundalk player in the field and although he struck the ball well from tee to green he couldn’t buy a putt and finished joint 38th after rounds of 78, 76 and 81.

Brendan Lawlor made it a great weekend for Dundalk’s elite players when he finished second in the opening event on the 2019 European Disabled Golfers Tour. Winds in excess of 50mph on day one of the Pas De Clalais Handigolf Open in France saw Lawlor shoot a ten over par 83 to lie well done the field at the halfway stage.

But he came charging back in the final round and shot a three under par 70 to climb up the leaderboard and finish in second place, five shots behind the winner, Charl Henri Quelin of France.

Meanwhile, West of Ireland champion Caolan Rafferty is one of five Irish players named in the preliminary Britain and Ireland squad for the biennial Walker Cup match against American which will be held in September at Royal Liverpool. The 26 man squad will assemble at Royal Liverpool this Tuesday for a get-together ahead of the Lytham Trophy, which takes place in nearby St. Anne’s from Friday to Sunday. Rafferty is one of the favourites in Lytham after finishing tied 21st, tied seventh, and tied 14th on his last three visits to Merseyside.