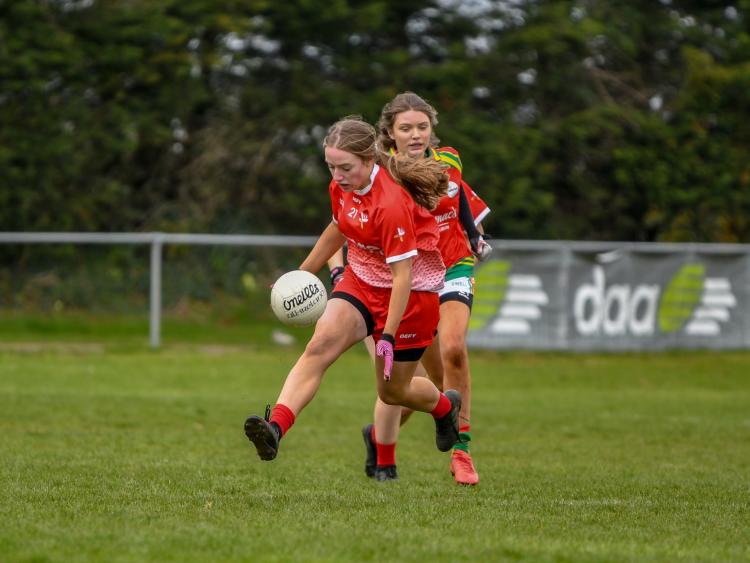 Louth U16s completed a wonderful weekend for the county by surviving a nail-biting finale to defeat Westmeath in the provincial semi-final in Mullingar on Sunday. (Pic: Warren Matthews)

Louth U16s completed a wonderful weekend for the county by surviving a nail-biting finale to defeat Westmeath in the provincial semi-final in Mullingar on Sunday.

The Reds got off to a dream start with a Roisin Maguire penalty inside opening five minutes, while points from Roisin and Mia Duffy had Louth had ahead after 10 minutes.

But Westmeath fought back ahead of the interval, scoring two goals, to take the lead. Indeed, were it not for the defending of Amy Farrell, Caitlin O’Reilly and Aine Carolan, the home side would have been out of sight.

A Seona Halligan point late in the half was followed by a 40 yard run and goal by Rachel Leonard which left the interval score 2-5 to 2-4 in favour of the hosts.

Westmeath re-emerged strongly and held a four-point lead entering the final 10 minutes, only for Louth to show their superior fitness, reducing the deficit to two points courtesy of Sarah Gilmore and Halligan efforts, before centre-forward Leonard went on another fabulous run which ended with her finding the net.

And Louth handled the five injury-time minutes well, keeping the Lake County at bay, with the final whistle being greeted by joyous scenes involving the large travelling support and their heroines.