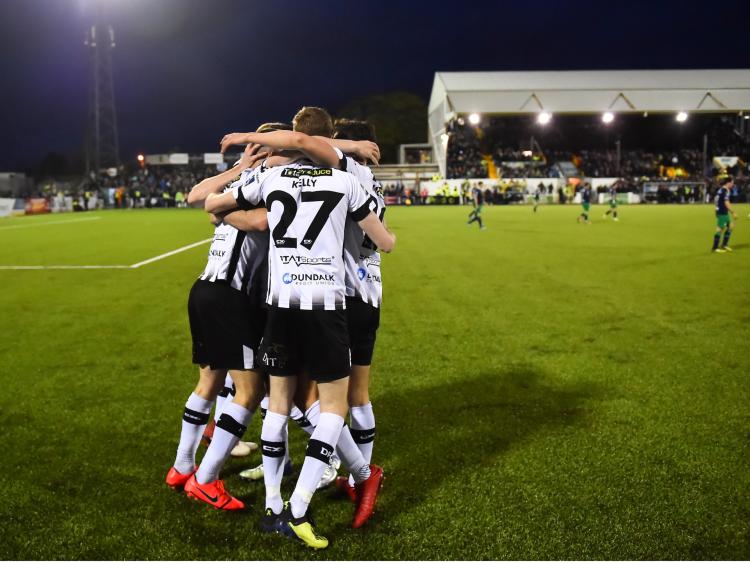 Patrick Hoban smashed Dundalk FC’s 76-year league goalscoring record with a precise first-half header, as the defending champions closed right in at the top with a 2-1 win over leaders Shamrock Rovers at a jammed Oriel Park on Friday night.

Backed by a vociferous home support, Vinny Perth’s side grabbed hold of the game on the half-hour and were deserving of their half-time lead.

That arrived thanks largely to Jamie McGrath, whose perseverance earned a corner. Michael Duffy was as reliable as ever with the delivery, and Hoban’s diving header was unstoppable, as he clocked up number 70 in the league to break Joey Donnelly’s longstanding target.

On and off the pitch, Dundalk were outstanding, and they doubled their advantage on the hour-mark when the marauding Seán Gannon supplied the assist for Duffy to hammer home. It would have been three soon after, but for an incredible Alan Mannus stop.

However, the Lilywhites were made to sweat for the three points after substitute Orhan Vojic finished between the legs of Gary Rogers in the 83rd minute. The champions, though, kept calm for a sixth home win on the spin.

Brilliant move from @DundalkFC finished by Michael Duffy as the hosts go 2-0 up at Oriel.

Perth had made two changes to his defence from Easter Monday as Daniel Cleary and Dane Massey came in for captain Brian Gartland and Dean Jarvis, following Monday’s convincing win at UCD. Hoban carried the armband.

Manager Stephen Bradley was brave in giving sixteen-year-old James Furlong his full debut at left-back, in one of three changes, as striker Dan Carr and Limerick native Joël Coustrain also came in. Former Lilywhite favourite, Ronan Finn was deployed at right-back in a makeshift backline.

Finn was on the attack early on when his by-line cross was well smothered by Rogers, with Aaron Greene sniffing. That, though, was about the height of the action in the opening 22 minutes, where Dundalk were full of energy but offered zero threat to Mannus.

The first golden chance arrived on the half-hour when a delightful move saw Hoban’s clever flick set Duffy free but a heavy touch allowed Mannus to block. Moments later, the Oriel Park faithful were on their feet when Gannon created the opening, but both Daniel Kelly and Hoban were denied as the Hoops held firm.

However, the breakthrough would come five minutes from half-time. McGrath’s endeavour earned the corner, and Duffy’s delivery was met by Hoban, who got ahead of his man to plant a header in the bottom corner.

Rovers kept with the game-plan at the break, and on 49 minutes a Jack Byrne free-kick was threatening but Roberto Lopes’ header lacked accuracy.

Here's the goal that makes @PaHoban10 @DundalkFC's all time leading goalscorer in the league.

They continued on the search for an equaliser, but their challenge was made doubly difficult on the hour when Kelly fed the overlapping Gannon and he pulled a low cross back for Duffy to fire to the net.

The trick was almost repeated on 64 minutes when this time, Chris Shields played Gannon down the channel. His delivery again found Duffy but his shot was somehow stopped by Mannus, whose strong hand sent the ball wide.

As Hoban departed the scene to a standing ovation 12 minutes from the end, Shields – who committed to the club with a new long-term contract on Thursday – took over the captaincy.

Dundalk had a let-off on 82 minutes when Byrne’s follow-up from a free-kick was spilled by Rogers, with Lopes finding the net from close range. But the linesman’s flag was raised to wipe it out.

There was no denying Rovers in their next attack as Vojic got on the end of a wonderful Brandon Kavanagh pass, beating Cleary and rolling the ball under Rogers.

That made for a nervy ending, but Dundalk got over the line to continue their impressive form at Oriel Park as they moved to within four points of the summit with a game in hand.