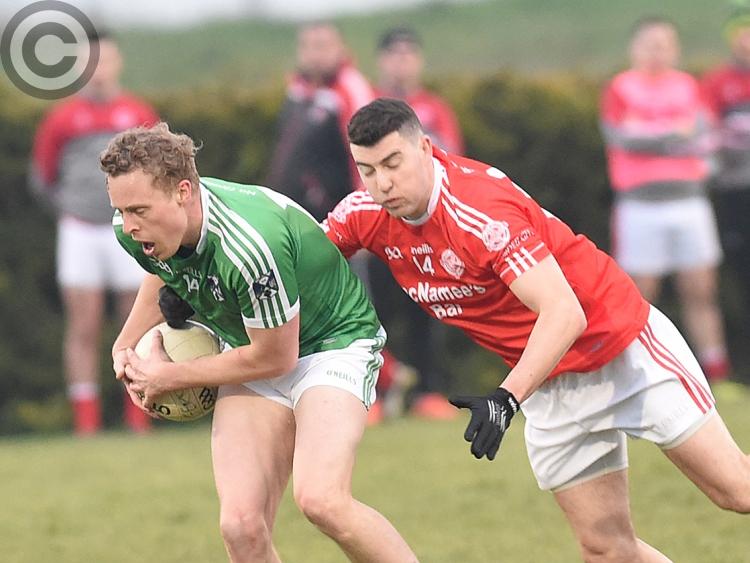 Geraldines beat local rivals St. Bride’s in this match played in McGeough Park on Friday evening to maintain their position at the top of the table.

St. Bride’s started the better and were two points in front after five minutes, but Jim McEneaney got his side off the mark two minutes later before the Knockbridge men regained their two-point lead on 10 minutes.

Dara Hamill and Josh Arrowsith evened matters up soon after, but St. Bride’s edged in front again only for Hamill to equalise on the quarter of the hour.

McEneaney had his effort adjudged to be wide by the umpire, but the referee overruled this to give the men in green the lead for the first time in the match.

The first goal of the match was scored on 25 minutes from Gareth Neacy, which gave his side a comfortable 1-7 to 0-6 cushion just before the short whistle blast.

After the restart the Blackrock/Haggardstown men moved up a gear in the first five minutes scoring 1-2 with only a solitary point from St. Bride’s in reply. The goal coming from Stephen Reidy.

Both sides exchanged minors before Fearghal McDonald got his name on the scorecard with a well taken point.

However, Arrowsmith registered his side's third goal of the evening on 40 minutes, effectively ending the match as a contest.

Both sides scored two points each after this just before St. Bride’s found the net themselves on 46 minutes from Neil Thornton, but it was too little, too late.

Conor Rafferty and McEneaney finished off the scoring with two late points to leave their side 12 points ahead at the end.