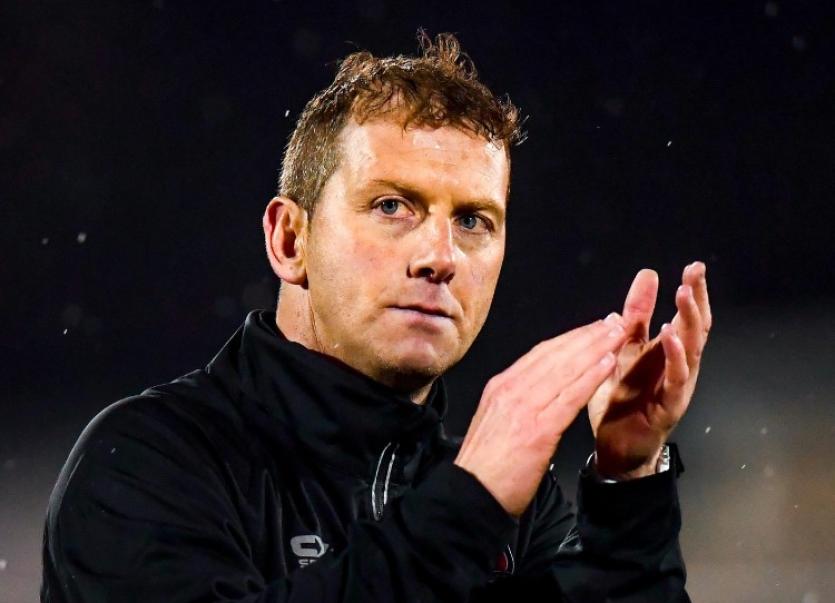 Vinny Perth is confident his Dundalk FC charges can progress over the weeks to come. (Pic: Sportsfile)

Vinny Perth is predicting “a difficult couple of weeks” for the defending champions, but he is confident that “the real Dundalk” will soon show up as they gradually find their feet with fitness.

Perth watched on as his players somehow dug out a last-gasp victory over high-flying Bohemians at Oriel Park on Monday night, where they gained an important three points on leaders Shamrock Rovers in the first of two games in hand.

Dundalk had been outplayed for large periods by an eye-catching Bohs side, who were missing a number of their regular starters, including top scorer Dinny Corcoran.

The three minutes of injury-time had elapsed when referee Tomás Connolly pointed to the penalty spot after a foul on substitute Daniel Kelly. Patrick Hoban was coolness personified as he tucked away the spot-kick, in what could be a season-turning moment.

However, Perth warned that it will take time for some of his troops to get up to speed. Chris Shields and Patrick McEleney made their returns from long layoffs with second-half substitute appearances against the Gypsies, but they are still some way from being ready.

Michael Duffy has only recently resumed full training, and John Mountney has been thrown in quickly. Seán Murray has played through a groin injury, while Joe McKee and Jordan Flores need game-time. Robbie Benson (foot) and Stephen Folan (knee) remain out.

“We aren’t right yet. We’re not fixed. There are people not ready,” Perth said, after Monday’s dramatic win.

“The squad is under real pressure in terms of fitness levels of people, because of injuries. We have got to stick at it, and people have to understand that it’s going to be a difficult couple of weeks. Once we come through that, you’ll see the real Dundalk back, playing the way they should.”

He went on to add: “I don’t know what the net-effect of tonight will be. I could be left with egg on my face. We hope it’s going to be a turning point. But I still think the squad is not fixed yet.

“People need to understand, and I’m genuinely not making excuses, but I’ve never seen anything like what we have at the moment. We have 10, 12, 13 players training out of 25. If they were muscular, I’d blame myself, the Strength & Conditioning coaches and how we’re training. But it’s not. It’s bones, it’s knee ligaments – it’s bad luck.

“But at the same time, that’s not making excuses. We should have more points on the board than we do now.”

Bohemians had made seven changes from the win at Finn Park on Friday. It certainly did not appear to affect their flow, and Perth was impressed by his opponents.

“It’s a pleasing result – it’s not the best performance in the world, but I think as a spectacle it’s probably a good night in terms of enjoyment,” the head coach said. “It was end-to-end. To be fair to Bohs, I thought they were outstanding at times.

“I was expecting that (changes) – a bit like ourselves. When you play a game every 3-4 days, it’s not going to work – something has to give. They have got a good squad. People talk about Bohs being part-time and all this stuff. It’s nonsense. They are what we were up until a year ago – the same principles.

“They have got a lot of good players, a lot of good young players – because they are based out of Dublin, that allows them have real quality. You look at some of their young lads that played tonight, they’re exceptional footballers. (Danny) Mandroiu is an U21 international. It didn’t overly surprise me – we had planned for a few changes.”