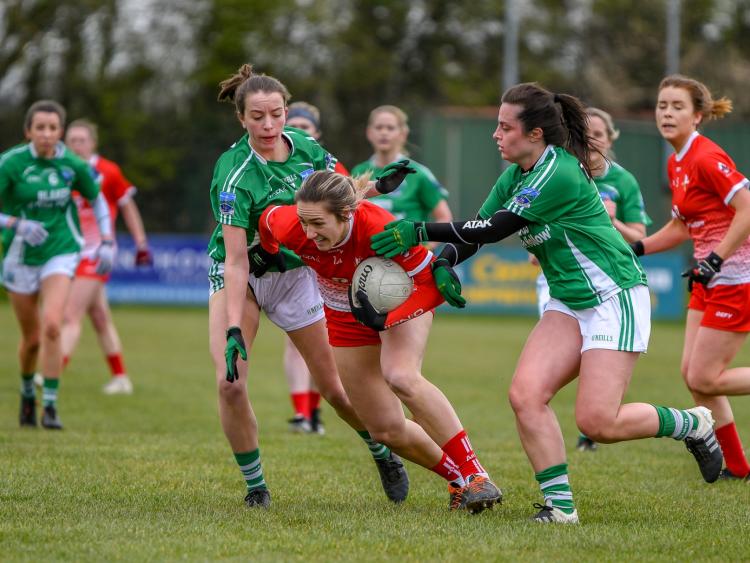 Louth secured top spot in Division Four ahead of next weekend’s semi-finals with a comprehensive defeat of title rivals Fermanagh in Tullyallen on Sunday afternoon.

Having spoken of his team’s strength in depth on the back of five successive wins, Darren Bishop made no fewer than six alterations from last Sunday’s win over Derry and yet there appeared to be no drop-off in standards as the Reds romped to victory.

Despite cutting loose in the second half, Louth were most impressive in building a half-time lead having encountered a stiff down-field breeze during the opening half-hour, a goal from Clan na Gael’s Ciara Woods helping them to a 1-8 to 1-5 interval advantage.

Indeed, Woods gave an eye-catching display for the second game running, her use of the ball and clinical nature in front of the target making her a threat Fermanagh were unable to contain.

The Erne girls were arguably the more competent while in possession, their ball usage in the first half being of the highest calibre and they engineered some fine scores as a result. Their opening goal from Sarah Britton was the result of some fabulous interchange play involving a myriad of outfielders.

They were, however, porous defensively and with Louth having capable runners, Bishop’s side made light of the gust, Rebecca Carr, Aoife Russell and particularly Eimear Byrne having major impacts on their building of a match-winning lead.

Fermanagh may have opened the scoring, through Aine McGovern, but their next offensive venture was some time in coming as Louth hit them for six, registering a rapid 1-3, Woods hitting the net via the inside of the post.

St. Brides’ Aimee McNally struck two points, too, and looked a genuine threat. And while her involvement in affairs waned as Louth began to channel their attacks down the right flank, she is certainly a player who can add to Bishop’s charges as the year progresses.

Britton’s goal on 20 minutes gave Fermanagh a temporary foothold, but they could only reduce the deficit to the minimum - which they did on two occasions - without getting level, as Kate Flood and Woods stretched the gap to three with late first half points.

And it could have been more had Louth captain Flood not cannoned the post with a penalty on the interval’s eve.

The second half was largely one-way traffic, a slip by Una Pearson which gave Fermanagh their second major being Louth’s only hiccup.

Carr added thrice to her personal tally, which finished at 0-5, while a pair of rampaging runs from Byrne saw her return 1-1, the goal almost ripping the net off the frame.

The full-time gap of nine was a fair reflection of the gulf between the respective outfits, although the Reds wasted several opportunities to add to their considerable 2-19 total.

Nevertheless, a sixth win on the spin is a fair achievement and something Louth would have snapped one’s hand off for following the painful round one loss to Limerick.

The turnaround since has been emphatic and bodes well for the weeks to come.