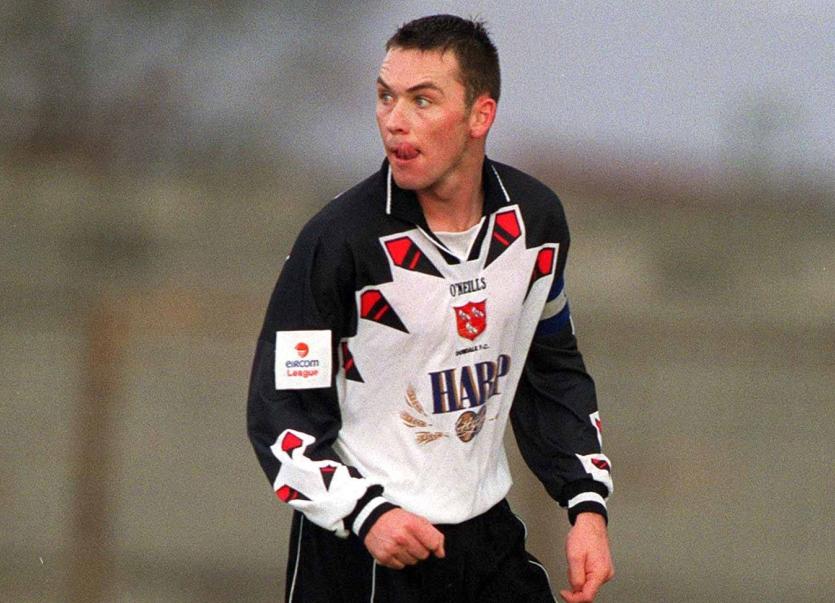 David Crawley was in the thick of the action when Dundalk FC played Sligo Rovers at the Showgrounds in early 1997. (Pic: Sportsfile)

“We wuz robbed” was a favourite cry of old from football supporters when a refereeing decision went against their favourite team. Well, this term certainly carried an air of credibility about it last Saturday night for Dundalk FC and their supporters who made the long journey to Sligo.

On the hour mark with Dundalk desperately searching for an equaliser, their pressure seemed to have paid dividends following the best move of the match. It started deep inside the Dundalk half when David Crawley did well under pressure to find Steven Reyes and the ex-Hibernian player quickly passed to Fintan McConville on the halfway line. The midfielder played an instant 1-2 with Brian Byrne, shrugged off a couple of tackles and brought Brendan Markey into the action.

The on-loan signing from Millwall jinked his way into the penalty area and, although he didn’t strike his effort firmly, Broujos in the home goal failed to hold the shot and Joe Gallen was quickest to react to dispatch the ball to the Sligo net.

SCORE DISALLOWED
However, much to the chagrin of the Dundalk players and supporters alike, the assistant referee (linesman) on the far side raised his flag and referee Tommy Traynor disallowed the score.

This certainly was a strange decision to say the least. When Markey shot, no Dundalk player was in an offside position and it was Gallen’s quickness of thought that enabled him to pounce.

Even the Sligo supporters admitted after the game that it was a perfectly legal score, that is little consolation to Dundalk as a decision like this could have grade repercussions for the Oriel Park outfit come the end of the season. While not wanting to be over critical of the men in charge, the standard of refereeing and assisting refereeing has definitely dropped in recent seasons and something will have to be done quickly to redress the problem.

DISASTROUS SPELL
That offside decision, coupled with a disastrous two-minute spell just before half-time, turned the game on its head.

With Dundalk leading 1-0 through a great McConville strike, David Crawley was adjudged to have fouled Chris Twiddy on the edge of the area and a penalty kick was the outcome. The referee’s mind may have been swayed by the fact that seconds earlier he was surrounded by Sligo players screaming for a penalty after an alleged Crawley hand ball. When all the fuss died down, Pádraig Moran calmly stroked home the spot kick to put the Sligo men on level terms.

GLORIOUS HEADER
Worse was to follow for Dundalk as just two minutes later Marcus Hallows scored a glorious header from a good cross from left-back Mark Hutchinson to leave Dundalk totally shellshocked by the time the half-time whistle sounded.

However, all credit must go to the team as they regrouped at the interval and came out in the second half and totally dominated the proceedings.

Even though they failed to win this one Dundalk have only to show the same commitment over the next few weeks and they could well play themselves out of trouble.

The game was played before a good sized attendance - what a pity that Dundalk fans can’t match that at Oriel Park where the team are struggling at the moment. A big crowd certainly helps, as was evident in Sligo.

MCNULTY BACK
Dundalk lined out with just one change from the team that beat Whitehall Rangers 5-1 in the FAI Cup. Tom McNulty returned after suspension, allowing Fintan McConville to move into his more familiar midfield role.

This move worked out well, as McConville had a great game as always in the thick of the action. He tied for the man-of-the-match award with Raymond Campbell who tormented the Sligo defence with some brilliant wing play.

THE SEASON
Dundalk survived the drop from the 12-team division courtesy of defeating Waterford - coincidentally - in a two-legged play-off. They won the first match 3-0 at Oriel Park, before losing 1-0 in Munster to stay up.