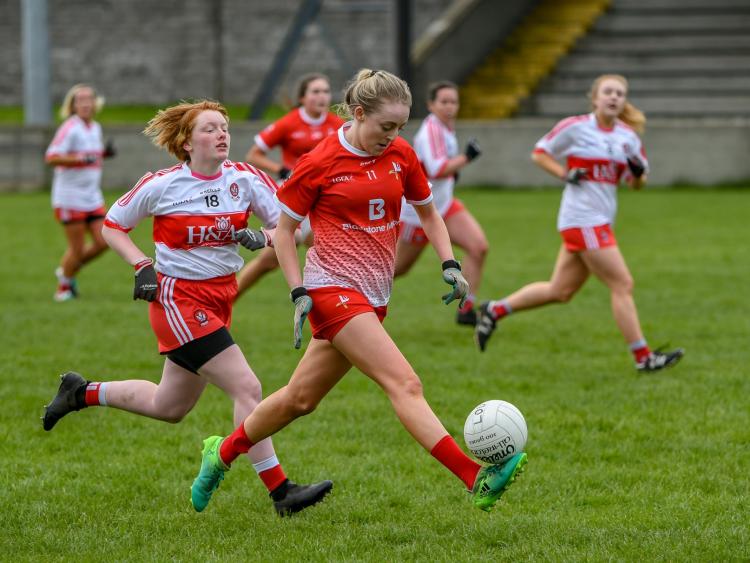 Winning is becoming an impressively familiar outcome for Louth and they ruthlessly stretched their run of league victories to five in succession at Páirc Clan na Gael on Sunday afternoon.

Just a point stood between the Reds and Derry in last year’s All-Ireland semi-final, but this affair was much less competitive, with Louth having tied the game up well before the visitors got off the mark. Indeed, it took the Oak Leafers 23 minutes to register and 43’ to get a score from play.

Lauren Boyle put in yet another Player of the Match display in the Louth attack, finishing with 1-4 to her name, but her team’s efforts overall must be noted, especially in an offensive sense with all of their 5-9 coming from play.

It took the Cooley Kickhams poacher just two minutes to bag the Wee County’s first goal, a clinical shot to the bottom corner, and she followed up with a brace of points before captain Kate Flood dinked over Derry’s Kathryn McNamee for major number two, on 13 minutes. This came at the end of a fine move which Sinead Woods and Boyle aided through slick passing.

And when Eimear Byrne lifted the net with a drive from close range less than 60 seconds later, the gap stood at 11. Rebecca Carr subsequently pointed before Aimee Glasgow opened Derry’s account from a free.

With Boyle registering once more, the half-time lead stood at 3-4 to a single point.

Further three-pointers arrived from Aoife Russell, following another Boyle point, and, on 44 minutes, Ciara Woods, after Derry scored the goal of the match when substitute Leonie McIlroy picked out the top corner having been fed spectacularly by Dania Donnelly.

Derry’s revival came as Louth rang the changes, but they got no closer than 10 points before a late flurry from the winners produced points from Alannah McLaughlin, Michelle McMahon and Aine Breen, either side of a looping goal from Norton.

In a display where no Louth player fell below a high standard, Boyle, Byrne, Ceire Nolan and Ciara Woods were particularly imposing, while Sarah Quinn’s value was truly felt upon her departure midway through the second period.