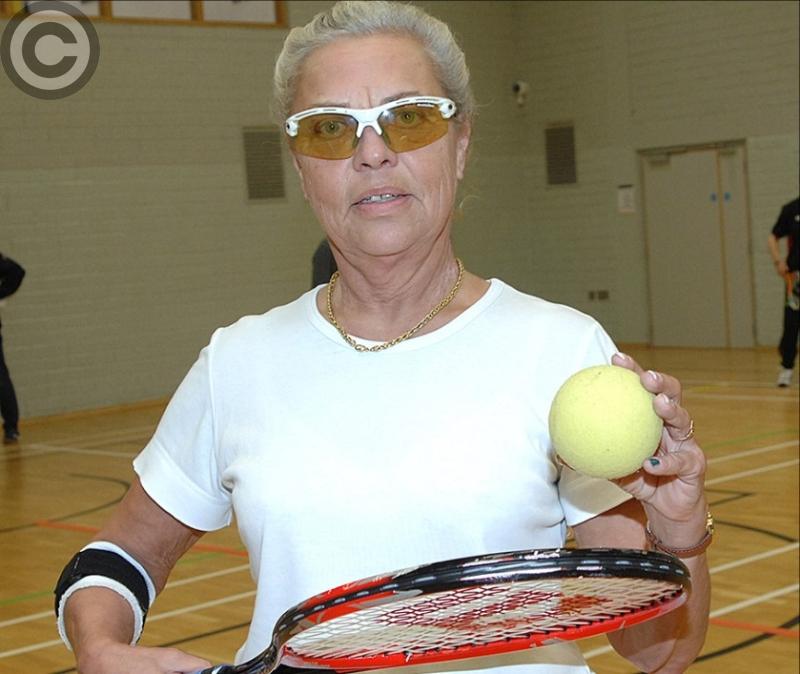 Babs Wiberg, who will be playing in the Visually Impaired World Tennis Championships in Spain this summer, at a training session in Dundalk Sports Centre. (Pic: Arthur Kinahan)

Less than a year after taking up the sport, Dundalk’s Babs Wiberg is preparing to take part in this summer’s Visually Impaired World Tennis Championships in Spain.

The German, who has lived locally since moving to Ireland in 2000, is part of a nine-member team that will travel for the competition in mid-June seeking to claim glory in the form of medals.

Having only taken up a sport which caters for those with various sight deficiencies last May, Babs’ progress has been extraordinary, but she says it wouldn’t have been possible had it not been for her team-mates and coaches, who meet thrice weekly at Dundalk Sports Centre for training.

“The determination of this small group here in Dundalk, many of whom didn’t know the sport before, it is magnificent what the people have achieved,” Babs told The Democrat.

“But without the effort and support from the trainers and volunteers, and Dundalk Sports Centre in Muirhevnamor, we, as players, wouldn’t be standing where we are standing at the moment.”

The game is played with “a soft ball slightly bigger than a tennis ball” with beads inside its inner core, designed to allow players know where the ball is while in flight.

Team Ireland are to congregate once this month and twice in May to prepare themselves for a championship which has four categories - B1, B2, B3 and B4. The B1 grade is entered by the most visually impaired competitors, while Babs is set to perform in B2.

Introduced to the game by friend and fellow Dundalk club member May McBride, Babs finds it difficult to explain how much of an impact tennis has had on her life and, indeed, her feelings ahead of representing her adopted nation.

“I was absolutely fascinated and fell totally and utterly in love with the game,” she adds.

“I can’t really put it into words. As much as I’m trying hard to improve all my mistakes, I’m very, very, very much looking forward to it - it’s such an indescribable honour to be a member of the team and to play for your country. It’s fabulous.”

One of six playing members of the Dundalk club, Babs was eager to name-check the others - Katelyn Flynn, May McBride, Carmel Doyle, Mark Keller and Martin Troden - as well as the coaches - Tom Murphy and Gary Rodriguez - and volunteers - Gerry Clarke and Ross Burlingham.

Meanwhile, the club will host an open day on Saturday, April 28, from 10am to 3pm in the Sports Centre for anybody interested to learn more about the game, while there will be fundraising bagpacks for the Irish World Championships team in Tesco Extra on Fridays, April 27 and May 3.