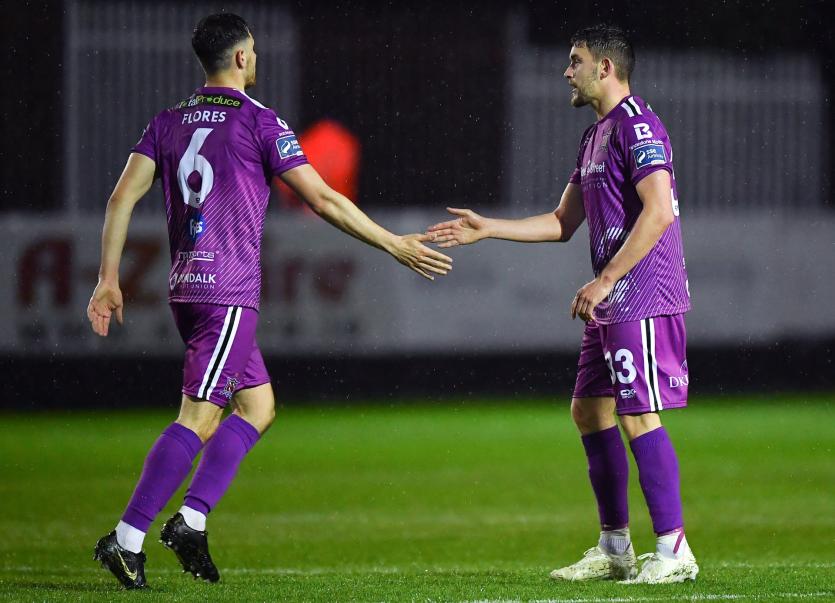 Georgie Kelly and Dean Jarvis cashed in for the Temple Street Foundation as a much-changed Dundalk made it through to next month’s EA SPORTS Cup quarter-finals with a 2-1 win over St. Patrick’s Athletic at a wet Richmond Park on Monday night.

The teams traded blows in the opening 15 minutes, with Kelly’s breakthrough for Dundalk being cancelled out by James Doona.

Jarvis restored the Lilywhites’ advantage before half-time, and that brilliant header ultimately proved enough to see off the Saints for the second season running at this stage of the competition. 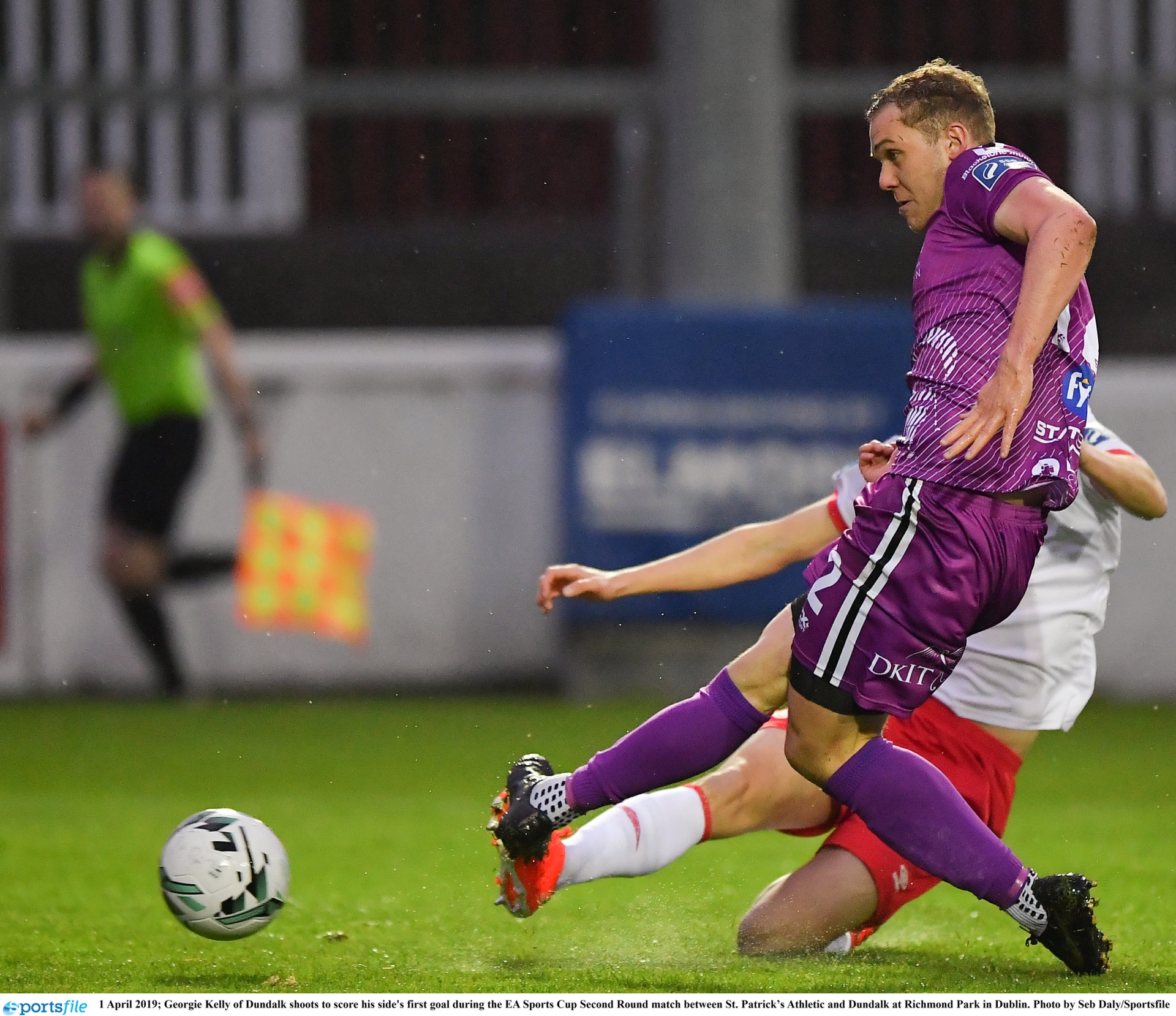 Centre-half Daniel Cleary was the sole survivor from Dundalk’s starting XI against Cork City 72 hours earlier, as head coach Vinny Perth called in his reserves with Friday’s return trip to Inchicore in mind.

Long-serving midfielder John Mountney captained the side, with the likes of Michael Duffy, Jamie McGrath and Gary Rogers given a well-deserved night off.

St. Pat’s were keen to progress after a five-match winless run, and that was reflected in Harry Kenny’s team selection as he retained five players from their loss at Bohemians.

Their only previous scorer this season, Mikey Drennan, was named on the bench despite the fact that he will miss this coming weekend’s league clash through an automatic suspension.

But it was six-time League Cup winners Dundalk who hit the front on five minutes. Kelly capitalised on a Dave Webster mistake to fire a shot that had enough power on it to get past Barry Murphy, who got a hand to it.

Perth’s players were wearing their new purple kit for the first time and Kelly’s early strike earned the first €100 of the campaign for the Temple Street Foundation. 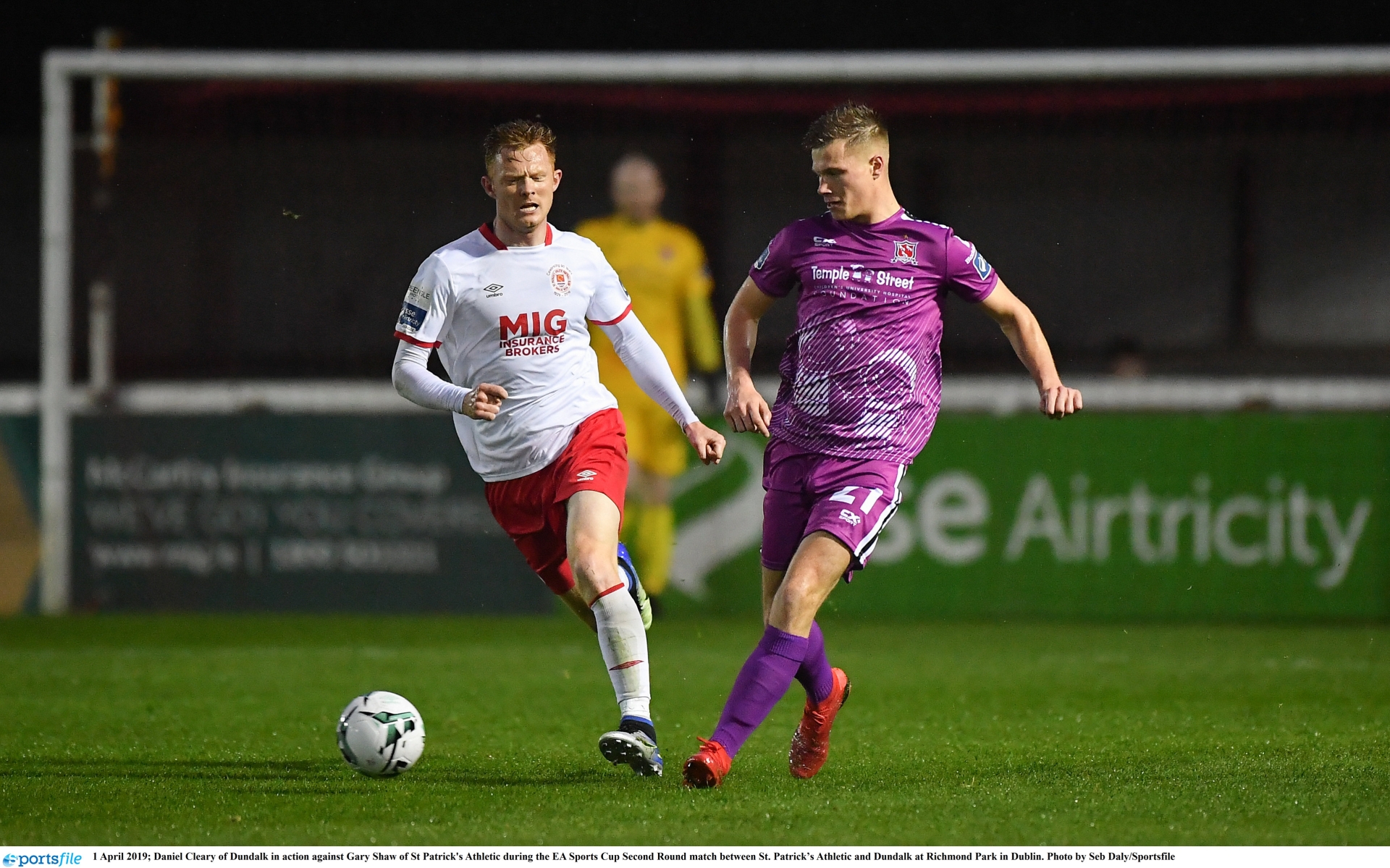 However, that lead did not last long. After Jordan Flores was denied a second by Murphy, St. Pat’s equalised by the quarter-hour through Doona, who cut in from the left and unleashed a 20-yard effort which took a deflection off Dylan Hand and crept past Aaron McCarey.

Midway through the first half, as the rain continued to teem down, former Lilywhite Conor Clifford drove a shot from distance that McCarey parried.

Dundalk regained the initiative in the 34th minute when Flores floated in a corner and Jarvis connected with a fine front-post header to score.

Shortly before half-time, there was worry for Dundalk when Kelly went down with a head injury, after an accidental collision with Lee Desmond. The young striker was able to continue, and he had a good chance to double his tally for the evening before the interval after combining with Lido Lotefa, but Desmond recovered well to deny him the opportunity.

The home side called on Chris Forrester at the break as he entered in place of Dean Clarke, although it did little to immediately lift them as the second half began quietly.

Daniel Kelly was called on by Perth just past the hour-mark, to replace youngster Mark Hanratty, who will have pleased the management team with his contribution.

On 72 minutes, the substitute almost confirmed Dundalk’s passage to the last eight when Flores provided the pass which Kelly latched onto, but Murphy produced a stunning stop to tip the ball onto the post.

St. Pat’s threw on Drennan in a bid to avoid a fourth straight defeat. However, despite his late free-kick going close and a couple of corners in four minutes of injury-time, they could not take the tie the distance this year as Dundalk held firm to make it four wins on the spin.

The EA SPORTS Cup quarter-finals are down for decision on Monday, May 27.