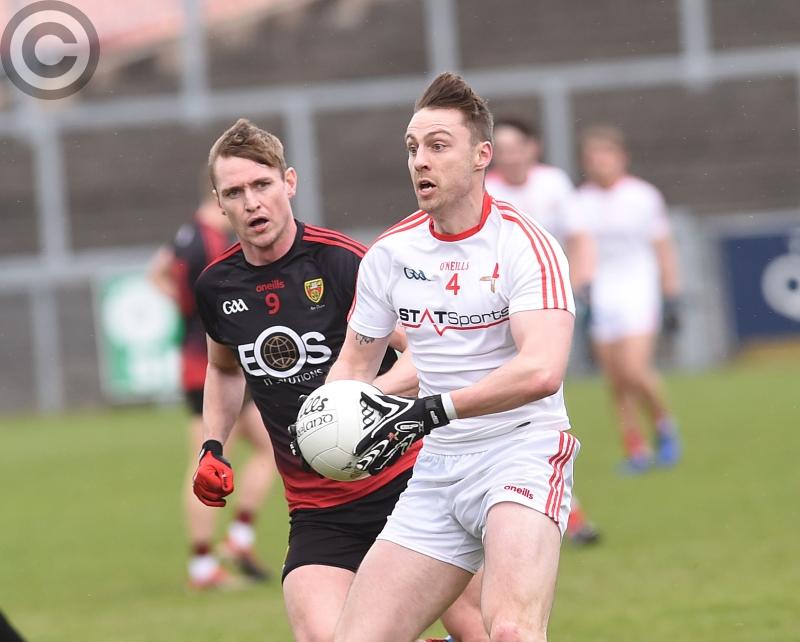 A result and performance not too dissimilar to the one in Thurles two years ago ensured Louth kept themselves in the thick of Division Three’s title reckoning at Páirc Esler on Sunday afternoon.

The victory was the Reds’ first over Down in 12 years - while it’s the county's first triumph in the Mourne province since 1996 - and sparked scenes of jubilation at full-time that could have been mistaken for promotion celebrations.

It leaves Wayne Kierans’ men staring into another ‘do or die’ game, versus Westmeath next weekend, but in the context of his young team’s development, it’s a major step. To largely control an affair which pitted them against the division’s leaders - who needed only a point to earn Division Two status - shouts aloud that Louth are a team on the rise, as Down’s upwardly mobile hopes flew away in the brisk Newry breeze.

Of course, Louth’s failure to score after the 54th minute almost put a very different guise on the outcome. They were as many as six clear during the second period, before a controversial Down goal sparked a resurgence that, in truth, looked far from likely on the evidence of the home team’s miserable effort up to that point.

Fergal Sheekey, the Louth ’keeper, was convinced the ball had gone wide, as were some supporters who positioned themselves at that end of the pitch. But the umpire’s arms remained by his side as Connaire Harrison fed Down captain Darren O’Hagan who picked out the top corner of the net.

That was the match’s turning point and had it proved decisive, a sour taste would have lingered on Louth buds.

“It’s a huge win and thoroughly deserved if we’re telling the truth,” was the post-match verdict of Declan Byrne.

“There are good footballers in Louth and Wayne seems to be getting the best out of us at the moment.

“I felt we dominated the first half, we had all the possession, but we squandered a few chances, myself included, and probably started to panic a wee bit in the second half.”

Panic is perhaps too strong an interpretation. Poor execution is arguably a better diagnosis of the circumstances surrounding Louth’s finish. They remained as composed in possession, but went for the jugular, a goal which would have finished the contest, on a couple of occasions when points would have stretched the advantage into unassailable digits.

Both sides finished with 10 wides, but while the majority of Down’s were the result of aimless punts in the target’s direction, five of Louth’s were from placed balls as Sam Mulroy, typically assured in such situations, endured an off day.

Furthermore, they left 1-2 behind them late in the first half, Byrne seeing a shot on goal saved by Rory Burns as Mulroy and Tommy Durnin - who lorded proceedings alongside James Califf at midfield - landed attempts into Burns’ arms.

But Louth’s sturdy defence condoned their offensive shortcomings, holding a fearsome-looking Down attack to just four points. Indeed, wing-back O’Hagan finished as the hosts’ top-scorer, with 1-1, as Caolan Mooney registered the outstanding minor.

“We didn’t give Down one scoring free today,” selector Liam Kelleher was eager to point out.

“I know we incurred one or two yellow cards late in the game, but that’s more tiredness than indiscipline. I’d be incredibly positive from that perspective.

“We have worked on the defence and holding the ball up. I felt we deserved a greater margin of victory.”

The contentious goal put just three points in the difference with a quarter remaining, 0-9 to 1-3; an unfair reflection of what had gone before considering it was Down’s first score in 46 minutes, since Mooney’s point 10 minutes in.

Louth closed with the final three points of the opening half, their centre-field monopoly providing a platform which they effectively built off. This dominance waned to a degree when Califf left the fray and with Andy McDonnell no longer the pivot in attack.

But when Down came forward, they were met by Bevan Duffy, Emmet Carolan and particularly Anthony Williams, who, in a primary capacity, gave his best display in a Louth jersey.

“Our backs were against the wall and the crowd got behind Down, but I thought we were extremely disciplined in the tackle today, we turned them over time after time,” Byrne added.

“We needed to stop making silly decisions up forward. It can be more difficult when you’re playing with the wind because the pass travels a bit further, but we were taking the wrong options at that time.

“But we settled ourselves and the boys at the back were phenomenal today, Bevan and Emmet Carolan, leaders at the back, were doing the right things at the right time; that’s something this team are starting to learn how to do.

“Down here we haven’t had too many wins, but that was what today was all about.”

Byrne played in the aforementioned promotion-winning match against Tipperary in 2017, a game which the Reds entered as underdogs. That will again be the case when Westmeath descend on the Gaelic Grounds, but, buoyed by this unlikely triumph over Down, Louth have belief, and that supplies them with a potent threat.