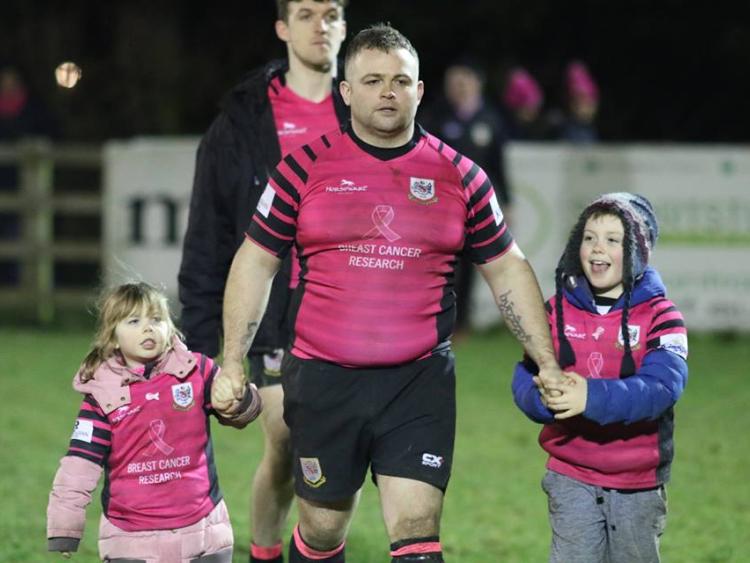 Jonathan Gray with Georgia and Alex, husband and children of the late Caroline.

Dundalk RFC paid tribute to the late Caroline Gray with a tremendous 23-10 victory at home to Bective Rangers on Saturday night.

Wearing a specially commissioned set of pink jerseys, Mike Walls’ team put in a powerful second half display to cap a night in which all proceeds, from a variety of fundraising events at the club, were donated to Breast Cancer Research and Louth Palliative Care.

Indeed, it was a performance that Dundalk can be proud of, one which also moves them further away from bottom side Boyne in the race for Leinster League Division 1A survival.

Having lost away to the Dubliners, Bective, earlier in the campaign, but buoyed by the Towns Cup second round win over Wexford Wanderers a week earlier, the hosts took an 18th minute lead through Darragh Conroy’s penalty.

Though they still went to the break in arrears, Bective scoring their only major - a penalty try - just seven minutes later, earning them a 7-3 advantage at the turnaround.

Bective opened the second half scoring, stretching the gap to seven, before Dundalk levelled, going over for their first try of the encounter, Tiernan Gonnelly burrowing across the line, with Conroy adding the extras.

And, 15 minutes from time, they took the lead for the first time when Robert Williams crashed over for his team’s second try - Conroy again converting to make it 17-10.

Conroy, Dundalk’s impressive scrum-half, brought up his 13-point haul with two late penalties to seal a crucial - and fitting - win for the locals.

The result sees Dundalk move to within two points of sixth place Bective, while Boyne are eight points adrift.

Kilkenny provide the opposition in Dundalk’s next match, which sees them travel to Foulkstown on March 2.