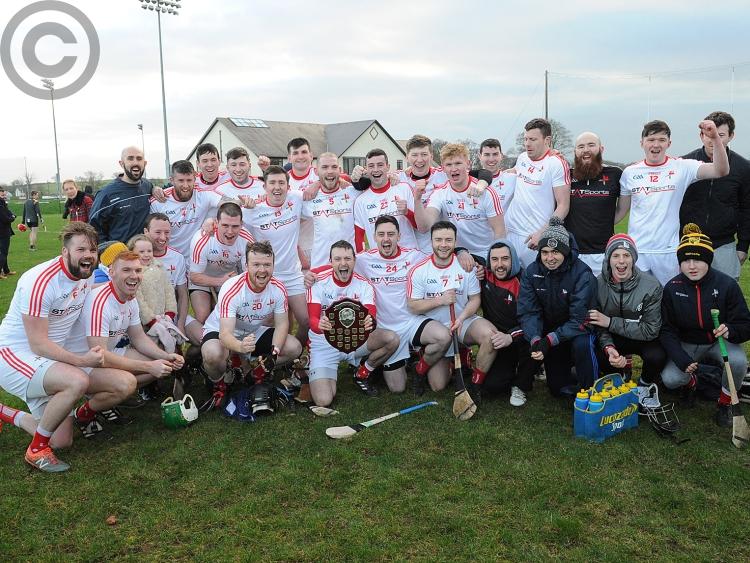 Paul McCormack noted Naomh Moninne’s Darren Geoghegan as an U14, such was the impression his skillset left on the Keady native. Now at the helm of Louth seniors, McCormack continues to be influenced by the teenager’s ability.

Half of the Wee County’s points tally flew off Geoghegan’s hurley, two of his nine-point haul coming from play, as Louth lifted a rare piece of silverware in the form of the inaugural Kehoe Shield.

David Kettle, James Costelloe and Conor Deane combined for seven points either side of the break, but it was Geoghegan whose impact was most telling. It wasn’t as though the youngster’s efforts were accrued minus pressure, either.

His early attempts set the tone for Louth’s first-half dominance, but, having conceded seven points on the trot and lost Darren O’Hanrahan to a red card, it was Geoghegan’s later scores which stood out, especially his eighth register, from an acute angle which bridged the lead to three.

DCU were coming hard by this stage, with Jamie Byrne prolific, but the No. 15’s incisive stroke was the sewing pin that burst the visitors’ balloon and Louth comfortably pulled away, scoring the final four points.

“I marked him down away back as a talent and he’s working on it,” McCormack said of Geoghegan.

“He’s a really level-headed fella, he’s mad into hurling and he’s down at Waterford IT which tells me the lad is ambitious and I like to see ambitious people.

“He’s started really well for us and he can and will get better.

“I’m really happy for Darren, his people and his club and it also gives great hope to other young lads in Louth because I know there are other players out there who are maybe not with us yet, and I stress the word ‘yet’. We’re keen to develop anybody who wants to play for the county and who is young and keen.

“Darren has set the standard there.”

Helped by Seaghan Connelly’s 10th minute goal, the Reds arguably had the spoils bagged by the quarter-hour mark, as Geoghegan (3), Kettle (2) and Jamie McDonnell ensured Louth made the most of the wind-advantage.

By half-time, Byrne - a Kilkenny man - had established himself as the Dublin college’s chief threat following a run of four points in a row, including three from play.

But Louth, as was also the case during the second half, closed the stronger, pointing through Geoghegan (3), Deane and Cathal Minogue.

The ability to outlast opponents, as was also the case in both halves of the previous two encounters, versus DCU/St. Pat’s and Longford, is something McCormack is keen to see continue.

“We have found out an awful lot about our squad, the players and the character they have; that’s very important for myself and Ciarán (Hatzer) coming in from the outside.

“(Character:) They showed it in bucketfuls, especially in the last 20 minutes there when we were against all the elements.

“That’s a credit to the players and is very much the mindset we’re trying to establish, that we keep going and working for the team.

“Working and running for each other, those are the building blocks for any team. What today does is show that they’re there.

“Our finishing is something that we can still develop, but, overall, we’re pleased.”

Leading 1-12 to nine points, a Louth victory appeared to be the only plausible outcome midway through the second period, until captain O’Hanrahan was shown a red card.

Byrne (2), Jack Doyle and Tiarnan Lane subsequently cut the gap to two, and the hosts looked in trouble with almost 10 minutes remaining.

But Louth answered the stern questions posed, even more emphatically than the scoreline suggests, considering they could have bagged a goal or a couple in the dying embers.

On his skipper’s dismissal, McCormack said: “What happened was unfortunate.

“It was a collision for the ball and, I suppose, he was a bit wild with the hurley. He’s an experienced player and these things happen, I understand, I’ve been there myself.

“He doesn’t owe anything to Louth hurling.

“That took us a while to digest and settle down. They hit a number of scores in a row, but we moved Seaghan Connelly out and he was very beneficial in winning ball.

“How we reacted was going to be a huge sign of where we are as a team and credit to the boys, they rid the storm out and didn’t concede any goals or too many frees.

“We had a massive point from Darren Geoghegan and Conor Deane driving forward from defence, all those things just turned the game in our favour again.”

The next fortnight is now assigned to readying themselves for the National League Division 3A opener against Roscommon, a match McCormack suggests will be a step up.