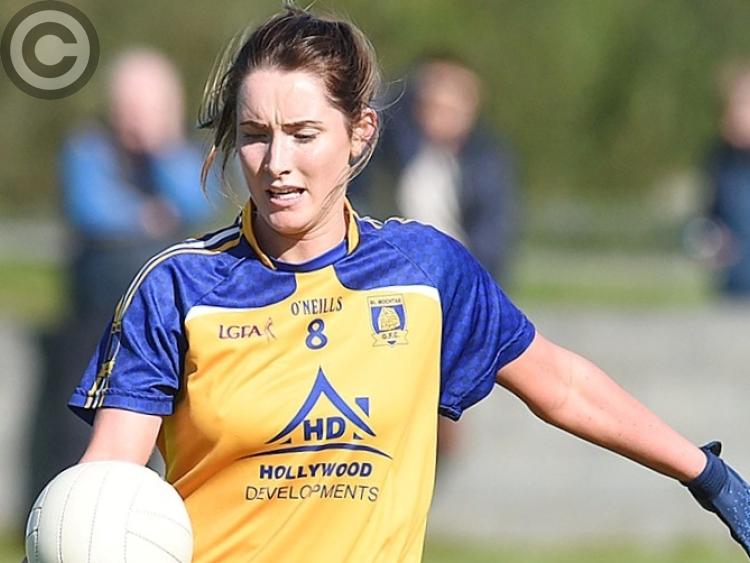 St. Mochtas' Aoife Byrne is one of the players who has returned to the Louth senior ladies' panel for 2019. (Pic: Arthur Kinahan)

Louth senior ladies’ manager Darren Bishop feels his panel is more balanced this year as preparations continue ahead of their Lidl National League Division Four opener away to Limerick on February 3.

Former captain Aoife Byrne (St. Mochta’s) and experienced campaigner Susan Byrne (St. Kevin’s) are two of the additions to a squad which has also welcomed back Deirbhile Osborne (Naomh Fionnbarra) from injury.

Though, Bishop maintains, the turnover has been quite limited with all but “six or seven” of last season’s All-Ireland finalists returning for duty before Christmas.

Clan na Gael’s Ciara Woods, Dearbhla O’Connor (St. Mochta’s), Stabannon Parnells’ Rachel McNally and Alannah Finn of Geraldines are other valuable newcomers to Bishop’s regime, but the Cremartin man has singled out the Byrnes, Aoife and Susan, for particular praise.

“Aoife has been a fantastic addition to the team,” Bishop told The Democrat.

“Just her maturity and the way she engages with the younger players, she leads by example and is very, very committed; that’s what has impressed me. She’s very open-minded and I really appreciate that.

“Susan Byrne is back in the panel which, in my eyes, is a fantastic addition.

“It’s fantastic to bring those type of girls back in so that the younger girls - the Lauren Boyles, Niamh Rices, Ceire Nolans and Aoife Russells - as well as having the likes of Kate Flood and Sineád Woods, they have a couple more to look up to.

“As I’ve said to the management team on a number of occasions, we’re going to have a major selection headache.”

His first full campaign at the helm, Brigid Russell and Pat Carr have been retained as backroom team members from last year, with a fellow Farneyman, David Shevlin, joining Bishop in a coaching capacity.

“At this stage, I’ve built-up a good, strong relationship with the girls. When it comes to dealing with training or dealing with any sort of issues the girls may have, they seem to be quite happy to have a chat with me which is great,” Bishop explained.

“Unfortunately, last year I only had 12 weeks with them and it was very hard to put my own spin on it and get the girls to the level of fitness that I would expect of an inter-county football team, or perhaps the way that they trained or prepared.

“I would have seen that last year coming up against Limerick, a far fitter and more experienced team, my job this year was to improve the players’ fitness and ability and, I suppose, get a style of play that suits the Louth ladies.”

Gym programmes have been tailored for every squad member as they bid to build on the pre-season “positivity” in the camp.

Bishop hopes to replicate last season’s league performance, where the Reds reached the Division Four final, but he is pragmatic, suggesting that the competition is much stronger this term. Derry, Antrim, Fermanagh, Leitrim and Limerick will all pose stiff challenges, along with Carlow and Kilkenny.

He expects an intensity increase in training as the spring schedule progresses and suggests a league semi-final berth should be the aim first and foremost.

“We’re not going full throttle as of yet, but we will be stepping it up as the months move on.

“We’d love to get to a National League semi-final because I think the competition has stepped up a bit from last year. I’m hearing whimpers from other counties in terms of the work they’re putting in through the winter.

“Limerick are maybe favourites for a National League title in Division Four, but there is no guarantee. It’s going to be a very competitive National League.”