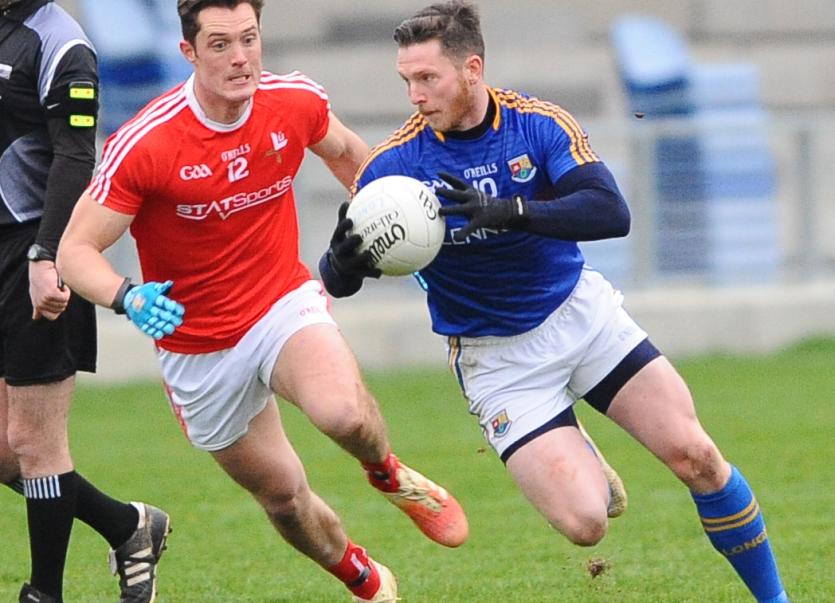 Louth made it a win, a loss and a draw from their three O'Byrne Cup matches as they bowed out of the competition in Longford today.

Needing a win to secure progression to next week's semi-finals, Wayne Kierans' men trailed by six points at the break, but a stirring second half fightback saw them take the lead with nine minutes to go.

Longford subsequently re-took the lead only for Declan Byrne - who was particularly impressive during the second period - to level deep into stoppage time. Ultimately, however, the point was in vain, leaving the hosts, who Louth face in the opening round of Division Three at the end of the month, with the last four place.

For Padraic Davis' side, it's a third match unbeaten and while not their most impressive display of the run, in front of a small attendance, they did enough to progress, minus several players.

Nevertheless, it was looking good for the home county when they established what appeared to be a comfortable 1-12 to 1-6 lead at half-time. Tadhg McEnaney scored the Louth goal in the 17th minute, while Peter Lynn found the back of net for Longford in the 28th minute, after connecting with the perfect pass from another prominent newcomer, Darragh Doherty.

But Louth, showing several changes from last week's comprehensive victory away to Wicklow, hit back in the second half, practically taking over, and Sam Mulroy had them in front, 1-14 to 1-13, having converted his second free of the contest.

Back came Longford, though, to regain the lead with a brace of points from Robbie Smyth (frees) and Louth suffered a significant setback in between these crucial scores.

One of their eight substitutes, Jim McEneaney, was sent to the sin-bin for the remainder of the match after receiving a black card in the 64th minute - in accordance with one of the new experimental rules.

The last of the Louth replacements, Ross Nally, landed the equalising point before Longford went ahead again with a point from Smyth in the 69th minute.

Moments later, Smyth had a great chance of a goal, but his shot was well saved by the opposing keeper Alan McGauley before Louth, despite being down to 14 players for the closing stages of the game, snatched a draw following a last gasp point from Byrne.

Though not the overall outcome boss Kierans would have desired, he can take heart from the efforts of his Louth players and know, with home advantage, they can compete when the teams reconvene in three weeks' time.