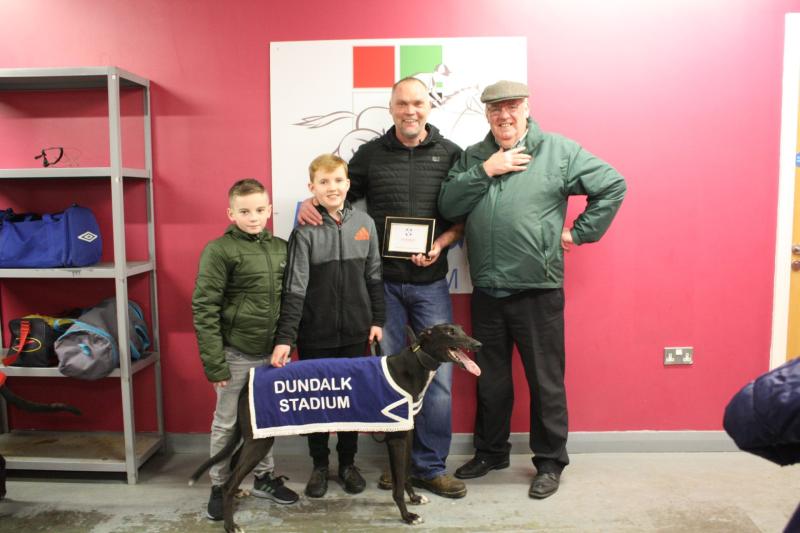 Realtins Star was a decisive winner of the Dorotas Wildcat At Stud Novice 670 at Dundalk Stadium’s opening meeting of the 2019 season on Friday night, and it might well be that connections have a right good prospect on their hands.

And those connections? Owner John Lynch, from Haggardstown, is well known in GAA circles having filled the post of Co. Board chairman and being actively involved with the Geraldines club as a player and administrator for probably longer than he cares to remember.

Looking after the greyhound is Gerard Lee, who is helped by his father, Gerry, another who has played Gaelic football – with Dowdallshill – in his younger days.

Prior to taking her place in Dorotas, Realtins Star had won three from seven, all of her victories coming at Drumbo Park. Like all others in the €800-to-the-winner competition she was tackling the 670 for the first time when she lined up for the semi-finals. However, she showed a distinct liking for the punishing trip by coming very late to score a short-head win.

Her time of 37.27 didn’t compare favourably with the 36.83 recorded by Waltzers Away, whose odds-on quote for the final seemed justified. Realtins Star was a 6/1 chance, but as you so often say, the runners don’t know what price they are.

Making a quick exit from trap three, Realtins was in command from an early stage and maintaining a strong gallop throughout got to the line ahead of the always prominent Boley Fella, with the favourite unable to make up the ground he lost at the break.

Improving considerably on the clock, the 36.67 winner could develop into a top stayer. And distances even further than the 670 could be the forte of another local runner in the field, Kieran Lonergan’s Matilda Jane, who was spotted doing her best work in the second half of the race. The winner’s time is just 20 spots off the record.

Matilda Jane is a comrade for Never Better Joe, who had the distinction of winning the first race of the season for Castleblayney trainer, Catherine Kerr, and Dundalk owner, Peter Begley, who is another with strong local GAA connections, serving as chairman of the Na Piarsaigh club.

Colm Farrelly, just pipped in the race for 2018’s top owner award, got the new term off to a perfect start, recording a nice-priced double. One of his winners, Pats Rocket, clicked in the final of the Friends of Dundalk Stadium 525, carrying a first prize of €1,200.

Like most of the runners from Farrelly’s Hackballscross kennel, Pats Rocket is a home-bred, and though noted for his early pace, the son of Droopys Jet and Course I Can won this one coming from well off the scorching pace set by Geedee Allstar. The local runner made it with a length to spare.

Painted Paws was the Farrelly winner, making it home ahead of Voicemail Mick in a tightly graded 400. The trap five runner, Ross Dote, was noted making late progress after losing several lengths early on, and could be suited by a move up in distance.

The concluding event on the eight-race card, a 525, went to the long-established Seamus Casey-Arthur Boyle axis. A consistent sort who now has 15 wins to her credit, Groveshill, a near four-year-old trained at the Casey kennels in Channonrock, went clear of the field at the second-last bend to score by just over five lengths,