'Taken to heart' with Peter and Gerry Nixon, Dundalk Young Irelands to the core 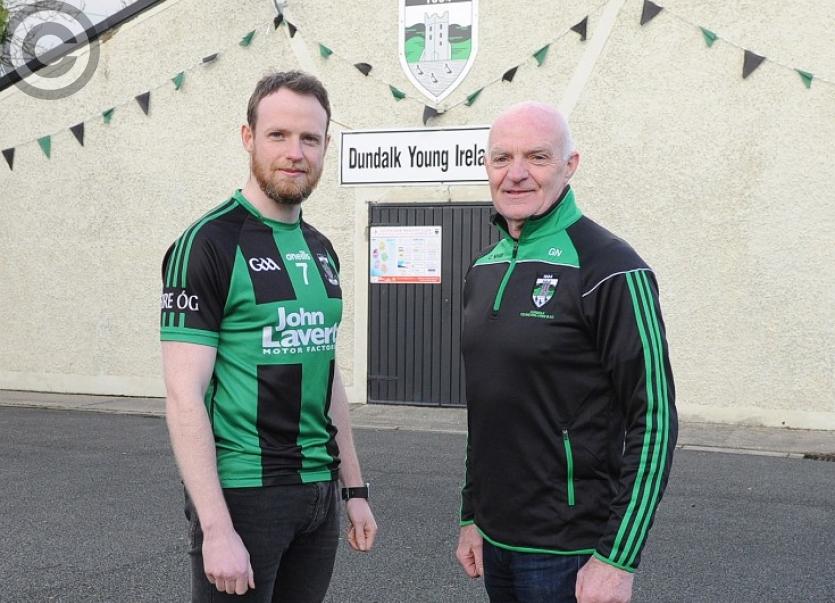 Gerry Nixon wears a Young Irelands top as we walk along the darkening corridor of Páirc Éire Óg, before taking a sharp turn into the kitchen, on our right, with Peter lagging in pursuit. It’s cold, the dim chink of light which breaks through a landscape window not enough to detract Gerry’s finger from the switch beside the door.

His black O’Neills top is stylish, three green lines running coordinated on either sleeve with his initials perched above the club’s crest, which is stitched over his left breast, hovering across his heart.

“(Young Irelands) you’re thinking about it all the time,” he says.

Later, as Peter speaks about growing up during a lean spell for the club, having to contend with the slagging that accompanied success for neighbouring sides, he recalls their history, their standing as the county’s oldest club.

Although he “doesn’t get emotional”, Gerry pulls his cap down as he surveys his feet. At the same time, Peter’s eyes stray to the right, voice crackling. There is deep emotion. Powerful.

“I am very emotional when it comes to football, when it comes to something that is meaningful to me, you know, the Irelands,” Peter, a twin of Conor and one of the four Nixon brothers, adds.

“We play with emotion in our family, it gets taken to heart.”

There have been testing times. After winning the junior championship in 1977, Cardinal O’Donnell a year later and the holy grail, the senior championship in ’79, followed by a final appearance 12 months later, Gerry reckoned the success was going to last forever.

After reaching the minor final in 2007, the same year as the four brothers helped Young Irelands to the junior crown before reaching senior three years later, Peter reckoned the success was going to last forever.

Then came something they never envisaged. They bleed green and black. Gerry played for the club all his life, later managing them as his wife, Ann, and sons, Gerard, Andrew, Conor and Peter, patrolled the sidelines. As children, they had special tops in the club’s colours and spent hours picking stones as their Hoey’s Lane playing fields were being developed. One life, one club. It seemed as though that would be the way.

“It was a very difficult decision for them to go,” Gerry says, after some mental consideration.

“It was nearly like a death in the family. My own wife cried when they left the Irelands.

“It was something that I stayed out of, they were men and could make up their own minds, but when I saw them for the first time in an O’Mahony’s jersey it was a huge shock and when the draw was made for the championship {2014}… I couldn’t believe it, to think somebody up there {pointing at the sky}...”

In early 2013, the four Nixons transferred to Sean O’Mahony’s. It arose from a dispute with Young Irelands, something that happens, according to Peter: “You don’t know why and it’s not nice, but disputes happen.”

Andrew and Peter were prominent for the Point Road men that year, before the former moved back to Young Irelands, leaving Peter as the sole brother with O’Mahony’s as they set upon a whirlwind adventure which brought them to the top.

That first round championship meeting, on a Friday, Peter cut Dean Maguire’s hair at his barbers early in the day before going home for his gear. He walked into Andrew coming out the door. Loving brothers, but soon to be enemies.

“The week of the game was unreal,” Gerry explains. “It was everywhere and you couldn’t get away from it. ‘Who’ll you be shouting for on Friday night?’

“I didn’t know whether to go to the game. I hoped they all played well and that there was no injuries or aggro. I was glad when it was over and I got home to the house.”

Peter: “Irelands will always be number one for me, but it was competition that night and I felt I had a lot to prove to the Irelands; I still feel like that sometimes.

“It was very hard because I knew by us winning that we were putting Young Irelands under a lot of pressure.”

O’Mahony’s went on to win the intermediate championship and subsequently Leinster, before coming up short to Roscommon’s St. Croan’s in the All-Ireland semi-final. A step from Croke Park, they fell one point shy, their dreams were shattered. It’s not a feeling Peter is up for sampling again.

As he thinks back, four championship medals aren’t enough to settle the regret of so many near misses.

Transferring home, after losing to St. Patrick’s in the senior final of 2015, isn’t something he regrets, despite O’Mahony’s winning Joe Ward the following year. It was time to return. He had spent some time picking virtual Young Irelands teams with Conor and Andrew over coffee, already preparing for an intermediate title tilt in’16.

“To see the O’Mahony’s win the senior final, and be after being in the team, was bittersweet for me, but I was over the moon for the lads, I felt like I won it with them and that’s a testament to the O’Mahony’s and how they accepted me. I ran on to the field that day and was embraced by some of them.

“Had I been looking at it selfishly, I would have stayed, but it was about my friends and my family, Dad was thinking of taking over the team.

“I felt it was an easy transition back into the Irelands and it was like I never left. It was a relief.”

Winning in Dowdallshill in October was another emotional moment. Peter produced the match-winning interception as Glyde Rangers sensed a late smash and grab, having played through injury.

He looked for his brothers when the whistle went, amidst an outbreak of pandemonium, but instead of running out of the dugout or from another area of the field, they were jumping the wall, and then your writer’s recorder was put within a swallowable distance. He was tearful.

What Derek Maguire had with Dean, Jordan O’Donoghue had with Cian, Fergal Sheekey had with Aidan, the Nixons had in ’07 and ’10, Peter didn’t have in 2018.

“I found it emotional,” Peter says, that glint returning to his eyes. “None of my brothers were in the dugout, they were climbing over the wall and it got me; it’s a hard thing when they’re still at an age where they could be playing.

“We never played really consistently together and it feels as though that’s slipped by us.”

Instead, Peter is left feeling a pressure, a self-imposed emphasis to do it for his brothers, for his family, for his mother and father; each Young Irelands to the core.

Achievement, ultimate and everlasting greatness is within their grasp and missing it isn’t an option. He’s a man in a team on a mission, a relentless juggernaut.

“There is an undercurrent tone that builds through significant wins. It can galvanise a team and gives you a sense of purpose; as it goes on, there is a sense of inevitability about us winning games we’re involved in.

“That’s what it’s like at the moment,” he explains, candidly.

Lifting a Leinster title would mean so much. There would be another opportunity to reach Croke Park, the one he missed in 2015. He could banish that demon, the gremlin that edges away in his mind. A game in HQ may even be enough to make Gerry tog out. For one day only et al.

A jersey lies in the corner of the room, a Young Irelands one. Pick it up and you see the crest, 1884 inscribed; put it on and it’s on your left, over your heart. Peter had it on. He’ll pull it on again on Saturday, mind focused, emotions in overdrive, one aim; victory.