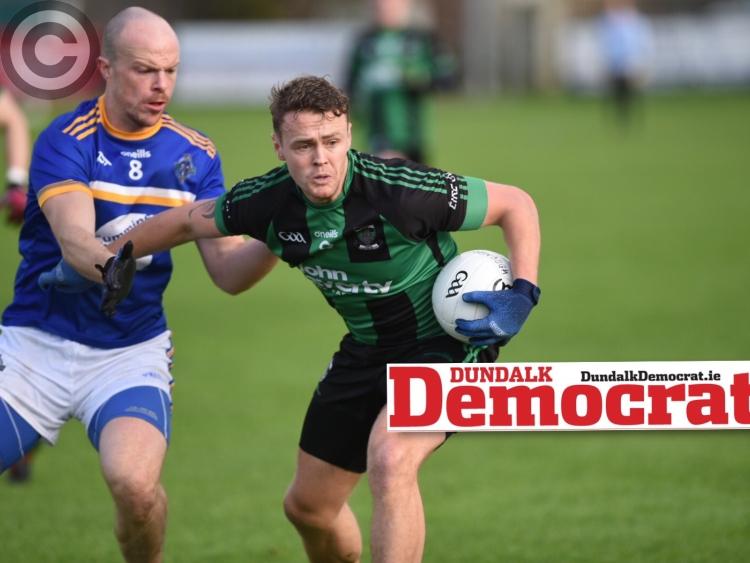 Dundalk Young Irelands made it 18 wins in a row by seeing off Laois’ Annanough in the Leinster JFC quarter-final on Saturday afternoon.

The Seatown outfit dominated the Dowdallshill clash in giving their most impressive display of the season, scoring 2-13 of their total from play. The Maguires, Derek and Dean, proved hugely effective at either end of the pitch, while Jordan O’Donoghue maintained his eye-catching run of form.

With each of their last three championship matches going to the wire, including the provincial opener against Westmeath’s Kilbeggan Shamrocks, Adrian O’Donoghue’s men seemed intent on making life a lot easier and having taken a fourth minute lead through captain Cian O Naraigh, it was plain sailing all the way.

They built a match-winning advantage in the first half, retreating to the dressing room with a nine-point lead, 1-8 to 0-2, and despite Annanough’s improvement on the resumption of play, the second half was merely a box-ticking exercise with the outcome in no doubt.

The elder of the O’Donoghue brothers, Jordan’s name has entered the fray in a Louth context following an impressive season for the green and blacks, and he enjoyed another fine outing, playing an integral role as Young Irelands regularly moved through the lines in blistering fashion. The No. 13’s sole point of the first half was the game’s standout score; he touched the ball several times in a flowing passage before shooting over from 40 metres.

Annanough played a role in their own downfall, though, with both Conor and Rory Stapleton allowing the ball to trickle by as Dermot Mone poked home the breakthrough goal on 10 minutes. ‘Keeper Seán Hennessy was left helpless on that occasion, but he did intervene shortly before half-time to deny Young Irelands a second major.

Conor Hennessy provided the Midlanders’ biggest threat, the stocky forward scoring their only two points at either end of the first period. John Scully doubled the visitors’ account with a pair of raking points in the early knockings of the second half, but only after O Naraigh and O’Donoghue (free) had extended Young Irelands’ lead.

The gap could even have been greater had Cian O’Donoghue not blazed off target when through on goal, before dispatching his team’s second three-pointer on 45 minutes. His effort saw the winners take a 2-11 to four-point lead, with subsequent registers from Mone, substitute Aidan Sheekey and Johnny Lynch bridging an already comprehensive victory margin, prior to Killian Horgan’s closing conversion for Annanough.

Kilkenny kingpins Tullogher Rosbercon now await Young Irelands on Noreside in a fortnight’s time and if they can reach the levels they did on Saturday, O’Donoghue’s men’s march will be a challenging one to halt as they bid for a maiden piece of provincial silverware.