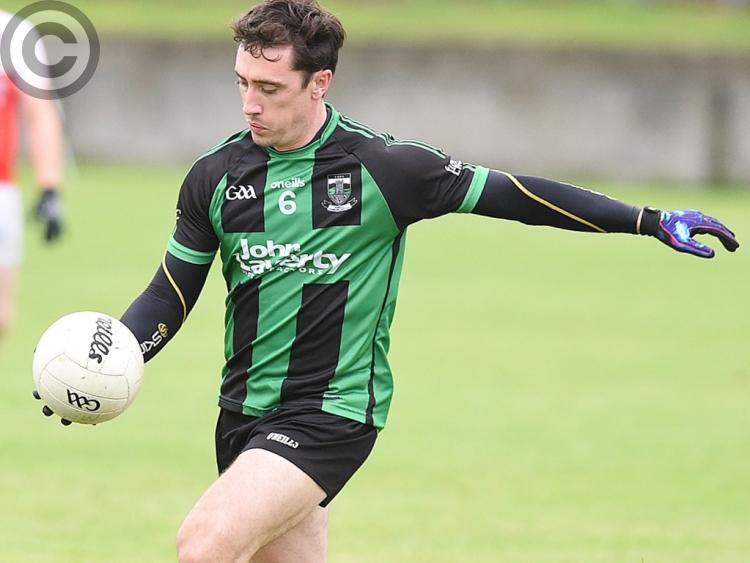 A commanding second half display sent the Dundalk Young Irelands through to the Leinster junior quarter-final at the expense of Westmeath’s Kilbeggan Shamrocks in the midlands on Saturday afternoon.

However, James Finnegan’s missed penalty on the stroke of full-time spared the Dundalk side not only extra-time, but their blushes, because if the corner-forward’s effort had to have found the net, rather than fresh air past the right-hand post, Young Irelands would have been kicking themselves.

“One thing about our boys is, they like to live on the edge, a wee bit too much for my liking,” conceded a very much relieved winning manager, Adrian O’Donoghue.

Dermot Mone got the vital goal that separated the sides at the finish. The major came just before the half-time whistle and provided the Louth champions with the confidence they needed for a big second half performance.

Nerves jangled as the affair got off to a frantic start with both sides spilling the ball and a little too eager in the tackle. Here was where the home advantage counted, despite playing against the wind, the familiarity of the venue allowing Kilbeggan to open up a three-nil lead. Nigel Scally, Westmeath county panelist, notched two frees and his midfield partner, Dean Fitzgerald, scored from play.

From that point, Young Irelands looked to be in trouble, going long periods without possession as Kilbeggan looked to have the upper hand in all departments.

“They were a far better team than I thought they would be after watching them a couple of weeks ago. They put a really big challenge up to us. But we didn’t panic, our boys don’t panic,” O’Donoghue added.

The visitors needed a lift and it came from their talisman, Derek Maguire. He pitched a free-kick up into the wind and it swirled over the bar before Jordan O’Donoghue quickly added another free.

A late addition to the starting line-up, Oisín McCabe then levelled the game with an excellent long range point from play.
Finnegan and Fitzgerald (free) put the hosts back in the ascendency and with the half drawing to a close, and playing with the wind, the Dundalk men looked to have afforded Kilbeggan a match winning advantage.

With that in mind, O’Donoghue introduced Aaron Murray for Peter McStravick and Murray - before being black carded in first half injury-time - had a profound impact. His tackling and intensity upped the visitors’ workrate.

Maguire then scored the point of the game from play, pointing from well beyond the 50 yard line with the outside of his right boot.

With the ante now raised, Young Irelands forced an interception, O’Donoghue winning the ball and finding Maguire whose shot hung in the air, only for Mone to punch past the Kilbeggan ‘keeper for the all-important major.

Leading 1-4 to 0-5 at half-time, O’Donoghue acknowledged the impact the goal had on proceedings: “It was a huge psychological blow to them because, in fairness, they were on top for the first 15 or 20 minutes.”

That turned out to be the case as Young Irelands were much more comfortable defending against the wind. O’Donoghue and Scally traded a brace of frees apiece before the winners opened up a five point lead on the counter, from replacement Aaron Rogers and Cian O’Donoghue.

Frustrations boiled over for Shamrocks as Mel Kiernan picked up his second yellow card and David Fennell then saw red for an altercation with Maguire within minutes of each other.

This further enhanced the Louth men’s control and despite a late flurry of points, Scally (free) and Paul Fennell, O’Donoghue’s men looked to be comfortable in dealing with anything that was being thrown at them.

“It’s the 17th game that we haven’t conceded a goal. I know they had a missed penalty in the last seconds, but we are going to keep that momentum going. It’s testament to the resilience of our defence.”

That resilience came from a short kick-out from Fergal Sheekey to Stephen Bellew that was deemed to be inside the 21 yard line. From the resultant throw-up, substitute Brendan Nannery was fouled. But Finnegan missed, much to Young Irelands’ relief.