Caoimhín Reilly, at The Gaelic Grounds 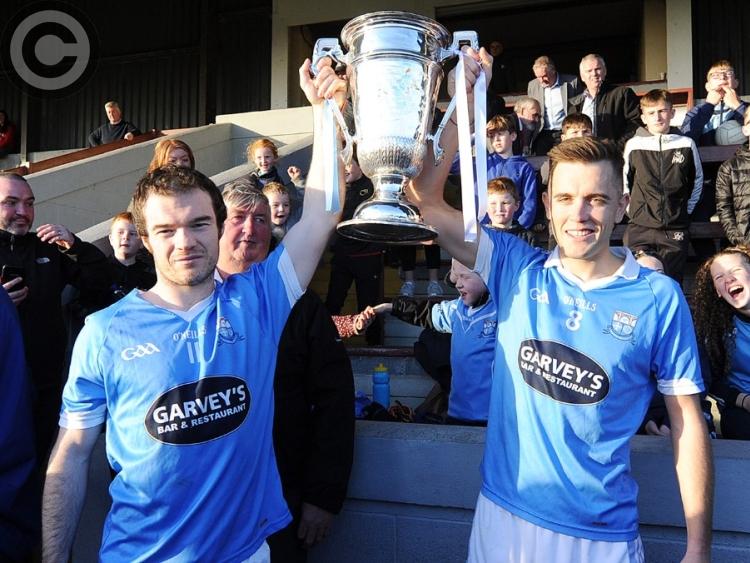 Naomh Máirtín will ponder deep into the winter how Joe Ward is not resting in Monasterboice having been mugged by Newtown Blues in Sunday’s senior final.

The Jocks looked a certainty for a maiden crown on their showpiece debut, leading 1-8 to five points towards the end of the third quarter.

Blues joint-captain Colm Judge spoke with a hint of guilt after the presentation, saying “the better team may have lost”. He wasn’t wrong as Ronan Phillips’ team were largely answerless to Máirtín’s intensity and hunger.

But the Newfoundwell men are a champion unit and summoned an incredible late spurt, driven by man-of-the-match Conor Branigan. His bullet-like harrow through The Jocks’ defence created the opening from which Ross Nally shunted the ball across the goalline to level affairs with a minute to play, while his point in the third minute of stoppage time sailed over after what seemed like an age, winning it in ultra-dramatic fashion.

It was cruel on Máirtín’s, but they will reflect ruefully on their inability to close out the affair. And ‘keeper Craig Lynch will feel particularly sore considering his black card was pivotal to the outcome.

As the Louth stopper came sauntering out in possession, with 15 minutes to play, he gave a pass over his left shoulder without taking a glance. The ball ran loose and he hauled a Blues attacker to the ground in a fit of desperation - referee Jonathan Conlon was left with little choice but to call for his replacement.

However, the final should be remembered for Branigan’s heroic impact. His point with seven’ to play put just Paul Berrill’s goal in the difference, 1-9 to 0-9, and Jocks were on edge.

“You try to keep the negatives out and take your scores,” Branigan said when asked about his side’s comeback.

“It was about playing the game and hoping that it would turn in our favour.”

And somehow it did; an outcome which looked almost unfathomable at the interval when Máirtín’s led 1-6 to three.

Blues’ Ciarán Downey showed serious nerve with the game in the melting pot and his team chasing parity. His miss on 42 minutes looked to have spelled the end of the holders’ challenge, but the 21-year-old recovered his composure to point twice more, including the leveller in stoppage time after Sam Mulroy had nudged The Jocks back into the lead.

“Frees are a funny thing. If I’d missed another one, I was gone, but I just backed myself and all the practice…,” he muttered with a sigh of relief.

“Thank God it went over, there are days they don’t.”

The crucial score long looked like it was going to come from an unlikely source. Paul Berrill, Máirtíns’ corner-back, netted at the second attempt on 28 minutes after being fed exquisitely by Mulroy. It came after Bryan McQuillan had struck a beauty and Conor Whelan a brace as Jim Farrell’s charges had Blues faltering. Indeed, all of the winners’ first half points were from placed kicks, though they were not without chances, having hit seven wides to Máirtín’s none.

“I think we were lucky to get in a half-time only six points down, but we knew we were just within touching distance and if we came out and kept kicking our scores we could pull it back. We knew we had the players,” Branigan added.

The Jocks had all the star performers, though, and their veterans were revelling in the occasion. JP Rooney was introduced before half-time and kicked a fine point, while captain Mick Fanning was a tower of strength at full-back, as was John Clutterbuck at left-half.

In contrast, Blues’ Andy McDonnell and Judge - the men who hoisted Joe Ward - had off days by their usual standards. The fact that the latter was replaced as his team frantically searched for inspiration was significant.

But The Jocks were struggling by this point too, with Lynch’s error of judgement unsteadying their pattern of play. From a position of strength, the scores were level. Mulroy raised a passionate cheer by putting them back in front, but they had blown the opportunity. Blues sensed fear and capitalised admirably, completing the double and two-in-a-row.

“Last year we were in relegation trouble and no-one was giving us a chance coming into the championship, but it’s typical of the Blues’ motto, we wanted to change that and give it a good, full year this year,” said Downey.

And so they are. Blues are champions - again - but Máirtín’s will never live this down.