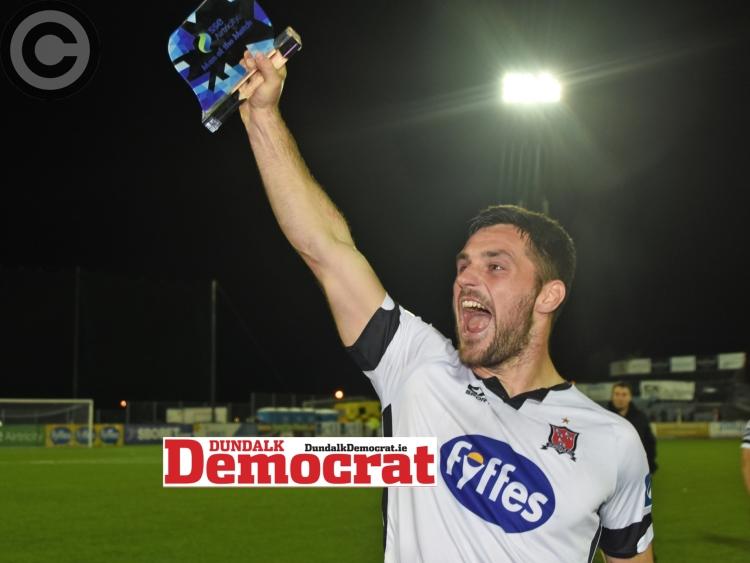 Pipping records appears to be the forte of champions Dundalk FC as yet more history was made at the RSC on Friday night.

The second of their goals against Waterford FC, scored by Ronan Murray, ensured the Lilywhites moved on to 79 league strikes for the campaign, surpassing their record tally of 2015.

The victory also has them on the trail of another major achievement as Bohemians’ heralded 85-point tally from 2008 is within range. Dundalk now sit on 83 and a maximum return on their crowning night at home to Sligo Rovers will see them attain something which was beyond even the wildest of expectations at the term’s dawn.

And, to dress a satisfactory night with further style, top-scorer Patrick Hoban moved himself on to 27 league goals, as Brendan Bradley’s 43-year-old figure stands just a brace away.

For Stephen Kenny, the 2-1 triumph also ensures his team have tasted the desired sensation at every Premier Division ground this year. And it was perhaps fitting that it also came on the turf where captain Stephen O’Donnell suffered his most horrific injury last May.

They were beaten on the same scoreline that night having struggled to generate clear-cut opportunities. How different things were six months on, though, as the Lilywhites regularly penetrated the Blues’ backline in a goalless first half.

Hoban, looking to break his duck against Waterford in 2018, had three early chances as Dundalk emerged from a bruising opening unscathed. But, with supply from both wide and central areas in such plentiful doses, a breakthrough appeared inevitable.

It may not have come before the interval, as Alan Reynolds’ men held firm, though the hosts' committed efforts merely delayed the expected as Seán Gannon supplied a pristine delivery from the right flank for Hoban to nod home.

And, just like that, the bubble burst as the frustration of so many misses dissipated from the visitors’ mindset, allowing them to capitalise on Waterford’s sluggish restart by finding a way past Niall Corbet again for the record-breaker.

The assist came from John Mountney - playing centrally on a rare occasion - as Murray showed neat footwork to engineer the opening prior to finishing ruthlessly.

Dessie Hutchinson put some guise of competitiveness on the scoreboard as the clock ticked towards red numbers and while some late pressure was applied on Gary Rogers’ goal, Dundalk were well worthy of the win, holding out, despite the fact that the victory margin ought to have been much more.

Another week, another record. Things just keep getting better and better…