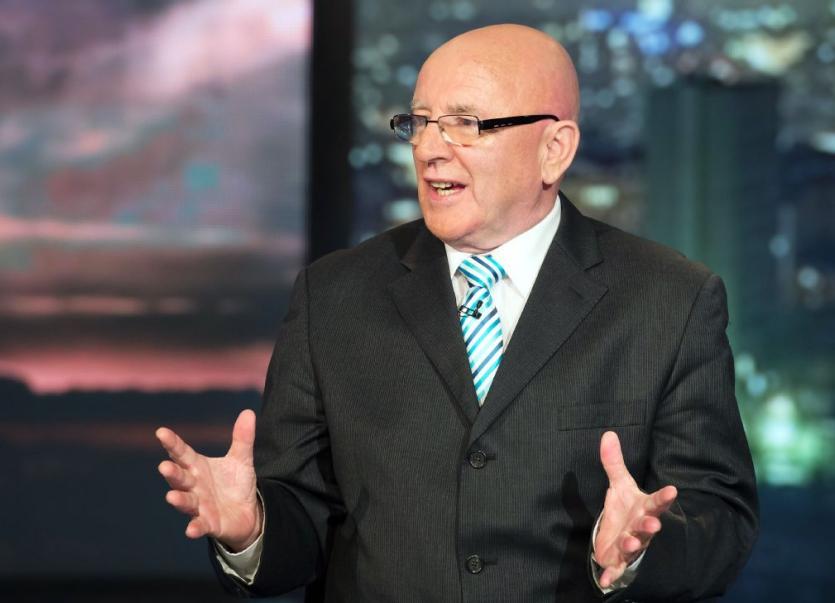 The pair host a three hour morning sports show on Sirius Satellite Radio in the US, despite broadcasting 16 hours apart. Indeed, in their fourth year together, their first face-to-face meeting wasn’t until more recently.

We speak on Thursday, shortly after they came off air, where the Argentine Paulo Dybala, and his misfortune at having to contend with Messi, in his position, at international level and now Ronaldo with Juventus, was a hot topic.

Another subject matter was Dundalk FC, Tommy’s beloved hometown club. A native of Knockbridge, he recalls the days of Ted McNeill at Oriel Park in vivid detail. Now, almost a lifetime later, supporting the Lilywhites has never been more fashionable and Tommy never misses a kick.

“I never thought that Dundalk could ever dominate like the way they are dominating now,” he told The Democrat. “I was in Tallaght the night they beat BATE Borisov and I had done some games in the Champions League with BATE Borisov; they’re not a bad team, but Dundalk were brilliant and my hope is that now, next year, they could qualify for the Champions League proper.

“The preliminaries are a right death-trap to get through, but it’s unbelievable what has happened with Dundalk, when you figure a few years ago there were lads going around with their cap in hand doing a collection to save the club.”
Marsh has even been converted.

“Rodney’s now a Dundalk fan by force. He has no other choice,” Smyth chuckles. “At least once a week we mention Dundalk, and Louth GAA too.

“A guy called me one morning from California and it was really strange. ‘Mr. Smyth,’ he said, ‘are you familiar with the Irish League?’

“‘Do you know about these two teams, Cork and Dun-something.’

“‘I’m watching this league,’ he said, ‘and I think it’s unbelievable.’

“It wasn’t set-up, he was just calling with a genuine interest.

“We had an English woman, Alison Bender, on the show to preview the Liverpool and Chelsea game; she’s married to a fella from Dundalk and when she was finished, because she’s a Chelsea fan and picked Liverpool to beat Chelsea 2-1 (last) Saturday, I said: ‘sure it’s not all bad news Alison, Dundalk are gonna win the League of Ireland.’

But Dundalk aren’t the only ones living the high life. When he stood down from ESPN duty a few years back, the former St. Bride’s man - who admitted some disappointment at the club’s performance in this year’s championship, when they exited to St. Mochta’s at the quarter-final stage - envisaged something of a ‘quiet life’.

It was anything but, in fact. Along with the radio programme, Amazon Prime have roped him into analysing NFL matches for the station, alongside Scottish commentator Derek Rae.

There was apprehension on his own behalf at the start, as some saw it as more of a skit, but the ratings have been bumper and Tommy has recently been handed a new deal after a very successful first season.

“It’s available around the world and it’s free. It’s available in Dundalk, in Knockbridge, but it’s half-one in the morning,” he adds.

RECORDS
He feels people in Ireland don’t fully understand what he has done, or does. In layman’s terms, he’s the American Eamon Dunphy, without the baggage.

Having worked on 18 Champions League finals, interviewing them all but Messi, he’s proud of his innings, and of his famousness in Nigeria!

“When ESPN were at their prime they broadcasted to 153 countries around the world and I got a huge following from Nigeria, I mean I’m huge in Nigeria and I mean that in all sincerity.

“It’s because one of the years, this Nigerian team had never won the African Champions League. We had a show called Press Pass and I picked them to win it, and they did.

“To give you an example, I put out a tweet during the World Cup about Nigeria. The tweet ended up having 152,000 views. It’s more than there is in Knockbridge anyway…”

News of a stadium in Dundalk is well received, but there is a hitch.

“A ground was something that was badly needed. It’s a great move. Now if they could get a few players to go with the ground it would be great… Maybe we could get JP McManus to buy the team or something.”

He asks of your writer’s origin, of his club: Roche.

“Jack Treanor used to say: ‘get them in, close the gate and kick the sh*t out of them…’”

He adds: “I grew up in Louth, I grew up in Knockbridge and in Knockbridge the GAA was upper. You had the Marrys, the Byrnes and the Mackins. Funnily, the first day I walked into Gaelic Park a guy said to me: ‘where are you from?’

“I said: ‘I’m from Knockbridge’

“It translated all the way to Gaelic Park.

“I’m very proud of what happened to me here and I’m delighted that I did at least listen to one game where Louth won an All-Ireland final.

“My wife, Treasa, who’s from Cork, wishes they’d win another one against anybody because no matter where I go I always say when I meet the Cork people: ‘hey, we beat yis in the final of ‘57’. She just wants us to win one to take the pressure off her.”

The Louth link is strong. Patrick Reilly and Andrew Smyth, relations of his, were in the county’s senior panel this year.

His career is like few others and says a lot for the local broadcasting stock that this part has produced Jimmy Magee and Tommy Smyth.

For what it’s worth, Tommy isn’t a big fan of Jose’s, but reckons it would be a big mistake if “an asylum is run by its inmates.”