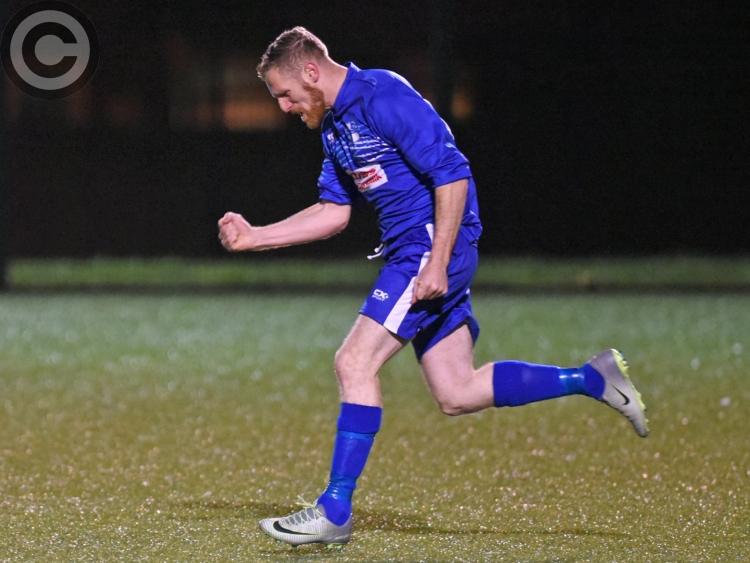 Brendan Hughes scored twice as Muirhevna Mor progressed in the FAI Junior Cup on Friday night with a 6-3 victory over Ratoath Harps in Dundalk.

However, the ‘Mor found themselves behind after just 10 minutes when a misplaced pass in defence presented the Meath side with an opening which they took.

But the winners weren’t behind for long, levelling just five minutes later through Hughes.

And, before the end of the first quarter, Hughes had his second, touching home after the ‘keeper had failed to hold Billy Smith’s powerful shot.

Leading by a slender margin at the break, Martin Smith, the Blues’ top-scorer this term, registered another before Micky O’Kane curled a cracker to the top corner from outside the area.

A mistake by Michael Cooney gifted Ratoath a second with 20 minutes to play, but substitute Colin Finan eased whatever nerves there were for the hosts by coming on to a pull-back and rocketing the ball home.

The match’s eighth goal went the visitors’ way, when ‘Mor right-back Brian Begley was unfortunate to see the ball hit off him and end in the net.

There was still time for a sixth goal for Muirhevna Mor, Tiarnan Mulvenna getting in on the act, his shot rattling the ‘bar before going in off the helpless ‘keeper.

With two minutes to play, Cooney atoned for his earlier error by diving low to his right to make a fabulous penalty save in what was the final piece of action in a thriller.