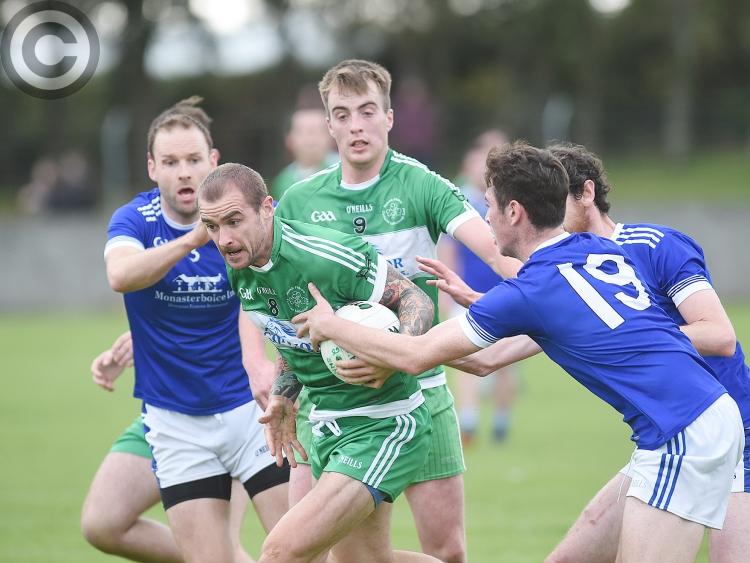 Naomh Máirtín progressed to their first Senior Football Championship final on Saturday night courtesy of a comprehensive victory over St. Patrick’s in Ardee.

The winning margin was a fair reflection of the gap that existed between the pair and it could so easily have been more had the Jocks cut periods of hesitancy out of their play, something they will have to do against Blues on October 21.

Máirtín’s have a golden generation coming with the likes of Sam Mulroy (0-3), Conor Whelan (1-5), Conor Healy (1-1), John Clutterbuck (0-1) and Eoghan Callaghan (0-1) all recent minors who have back-boned their push. And so, it was fitting that they came of age to a degree against Pat’s, who may finally be wishing farewell to their own magnificent crop, players with seven senior medals to their names and nothing more to prove, the Finnegans, Paddy Keenan and Seán Connor among them.

The Lordship side, having bullishly controlled the second quarter, were in the ascendancy shortly before half-time, having turned a three-point shortfall into a slender advantage, Daragh Lafferty’s goal and a point from Dessie Finnegan giving them a lead which they looked like taking to the break.

But Stephen Campbell struck just before the whistle, nudging his team back in front - it was a deficit Pat’s, who wearied, never looked like reeling in. Several of their crusades forward lacked the required urgency in the second half and with the ball often spilling or being turned over - the Jocks’ packed defence playing to plan - there developed an inevitability over proceedings.

Still, Jim Farrell’s men were allowing Pat’s to stay in the game, seemingly reluctant to leave the decade’s most prolific winners in their wake, or perhaps it was down to the weight of history. After all, following semi-final heart- ache 12 months ago, the Monasterboice natives were within sight of a new place, a senior final.

Even in prevailing by 11 points, it was only after shooting 1-2 in the closing stages that they began letting off some emotion. They’re a fabulous team with serious potential, but belief could be an issue approaching the showpiece. Although, there is nobody better than trainer Christy Grimes, a four-time winner of Joe Ward with Mattock Rangers, to apply them with a dose of confidence over the upcoming weeks.

They started better with Whelan on the mark, shooting over thrice to no-reply, the second of which could have been a goal had he saw Healy, who stood in space. It was a warning Pat’s failed to heed, however; and it cost them.

Having done so well to get back on terms, with Keenan (2) and Conor Grogan (2) their driving forces, Healy again found himself close to goal, shortly after spurning a one-on-one with Connor, making no mistake on this occasion, trickling an effort inside the post.

Pat’s hit back. Leonard Grey and Ross Murphy linked neatly and the former threw across for Lafferty to palm to the net, an effort which preceded Finnegan’s raking point as Pat’s led for the only time.

Though, crucially, they couldn’t retain the initiative to half-time. Their defence was sucked out the field, which allowed the excellent Callaghan to find Campbell breaking through, and he made no mistake with a rasping drive to the net.

The two-point lead it provided - 2-4 to 1-5 - grew gradually after an even start to the second half. Now without the Laffertys, Eoghan having been black carded and Daragh replaced, Pats’ challenge weakened and without needing to maximise their superior physical reserves, Jocks did enough, with seven different players registering.

Pats’ race was well run by the time they conceded a calamitous third major. Aidan McCann’s toe-poke back to Connor came up short and after a pinball exchange, Whelan found net.

There was little fanfare at the finish, lending the notion that the Jocks aren’t finished, or won’t be until they have the ultimate prize within their grasp.