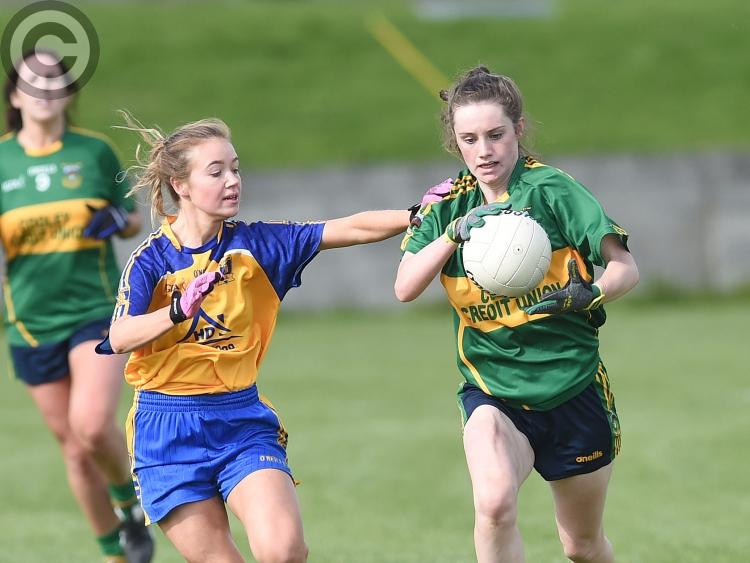 Cooley Kickhams qualified for a first senior ladies final since 2013 after narrowly seeing off St. Mochta’s in a tense clash in Kilkerley on Sunday morning.

A game which would rival any to have taken place in Louth this year, county stars Niamh Rice and Lauren Boyle came to the fore when Kickhams needed them most, shooting all but one of their side’s total, as they overturned a half-time deficit to show two in front at the end of a thriller.

Mochta’s can count themselves very unfortunate given they led for much of the hour; however, the straight red card brandished to midfielder Aoife Byrne, for a skirmish with Cooley’s Claire Donnelly, played a decisive part in the outcome.

The Louth Village outfit were well on course for victory beforehand. The younger Byrne sister, Éimeár, was causing the Cooley backline all sorts of problems with her strength and running abilities, but once her main supplier was off the field, the No. 11’s influence was lessened, and that proved crucial.

In contrast, down the hill and with the breeze at their backs, Boyle and particularly Rice pointed from a variety of angles, with the latter’s pace a sight to behold, as Cooley wrestled control, going from 1-4 to five points down to two ahead, 0-10 to 1-5.

Rice also struck the post with a powerful effort at the end where Éimeár Byrne almost brought the ‘bar down with a stinging shot shortly after she had rifled the game’s only goal to the net - the margins proved so fine.

The conditions played a huge part in the swing. So many of Cooley’s several first half shots got caught in the wind and dropped into the hands of Niamh Kirk - who excelled between the Mochtas’ posts - whereas Boyle and Rice were converting from upwards on 30m in the second half.

Trailing by a point entering injury-time, Mochta’s had chances to level through Byrne and Leah Farrell frees, but, agonisingly, both failed to find the target.

With over five minutes of stoppage time being played, they continued to hammer at Cooley’s defence. But Patsi Boland defended heroically and from one of her interceptions, Rice finished a sweeping move with a point.

A match with almost as many talking points as scores, Cooley can look forward to an October 12 date with Geraldines.