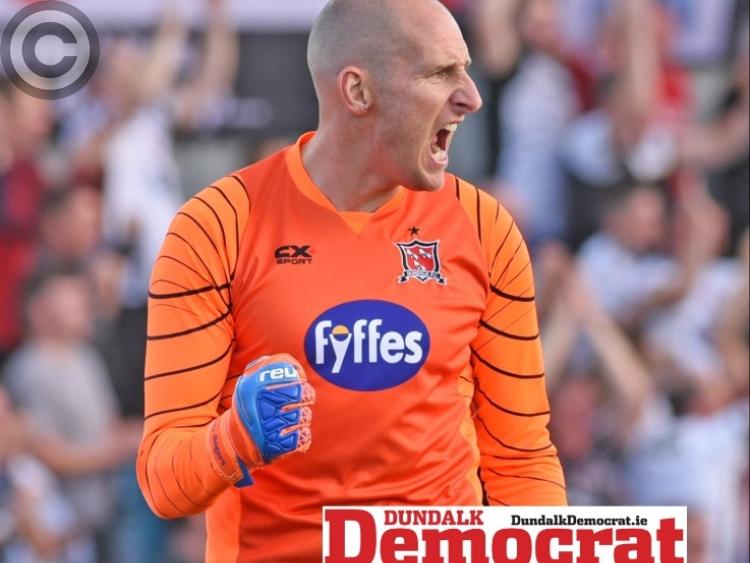 Gary Rogers accepts Friday night’s match in Cork could be a “defining game” in a campaign which possesses so much promise, but discards the notion that a victory in Turner’s Cross will put an end to the title race.

Dundalk FC enter the contest seeking to place nine points between themselves and a City side who have lost their last two Premier Division affairs. Such a lead, with the champions having just 12 points left to play for, would leave Cork with an almost impossible task.

“Although it could be a defining game, leagues are not won in one game,” Rogers told The Democrat.

“It comes down to the crunch, but it’s what you do all season long that puts you in a position for those games to be so important. I suppose we’d a poorish start with a few draws and people were sort of asking questions, but as the season’s gone on we’ve grown as a team collectively and you don’t get into a position where you can go and win a league unless you’ve done it all year.

“They’re highly charged games and that speaks volumes for the rivalry that’s there.

“Whichever team wins on Friday will get a huge lift from it for the run-in. We’ll be hoping to do the business which would put us in a very strong position with only five games to go, but at this stage of the season all games are difficult. If you look at any tie, all the teams are playing for something, relegation, Europe…

“Look at the game we’re after getting off Limerick recently and how they were. It’s always hard to get over the finishing line.”
It’s six games and three years since Dundalk, whose early head-to-head record against the Leesiders under Stephen Kenny was fabulous, last tasted success in Cork. Earlier in the season, despite dominating for much of the contest, Gearóid Morrissey’s strike settled the affair in favour of John Caulfield’s men.

That’s a goal and a game which was touched upon at training on Friday, Rogers admits, but there is no suggestion that their motivation strays from merely earning another win to aid their title hunt.

“It’s a case that we haven’t won down there for a while and obviously the games against Cork are potentially season-defining. When they won the league last year, they came up to our place and beat us.

“It would be nice to go there and to take the three points, but our intention is to win every game.”

He added: “The game at home at the start of the season was a good boost for us in that we beat them when I think people were questioning the fact that we hadn’t beaten them in a while. I don’t think we look too specifically at the fact that ‘we need to beat Cork’, but it was good to get that win and I think we really kicked on from it.

“It was important to get that monkey off our back.”

However, after a run of losing their encounters more often than not, two FAI Cup finals included, Rogers accepts that those hurts have contributed to Dundalk’s relentlessness this season.

“Last season you couldn’t argue that Cork deserved to win the league. Cup final goes to penalties, it’s a one-off and that’s the way it goes, but I do think it’s made us more determined as individuals and as a group to go and achieve things this year. At this point in time, we haven’t achieved anything in terms of silverware, but we’ve put ourselves in a very good position to reach our goals.

“The disappointment from last year, individuals have channelled it into going and having a successful season this year. From my own point of view, it’s been about going and winning the title back.

“A trait of this team this year is our ability to keep going to the end and get late winners. And when it comes to Friday night, we’d take that.”