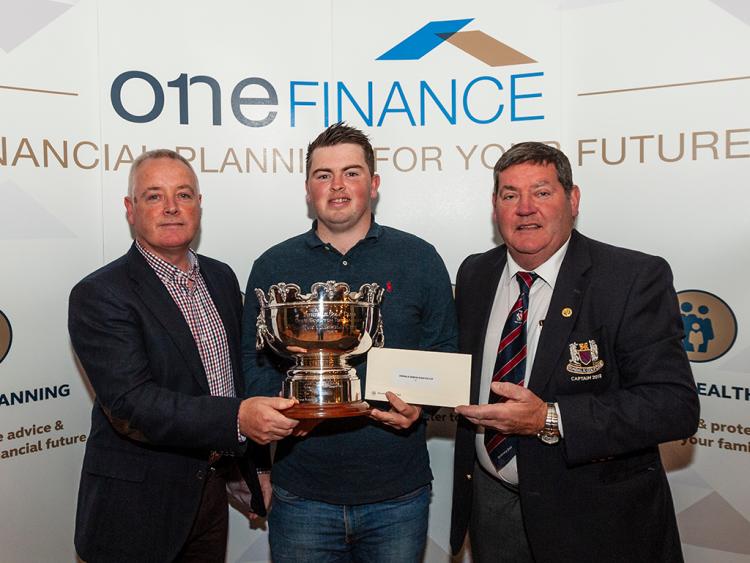 The 25-year-old shot two rounds of 68 for an eight under par total of 136 to win his home tournament by six shots from Co. Louth’s Gerard Dunne, who stormed through the field after an opening 79 to take second place on two under thanks to a course record nine under par 63 in the second round.

In the morning, Rafferty had covered the opening nine in one-under par after an eagle three at the par five sixth and a bogey at the par four eighth and he then birdied the 10th, 14th and 18th on the way in to take the lead after the opening round on four under.

That left him two shots ahead of Max Kennedy, Tom McKibben and Evan Farrell who all shot two under par 70s, while Eanna Griffin was a shot further back on 71.

However, none of the chasers managed to mount an attack on Rafferty in the afternoon with Kennedy shooting 81, McKibben 83 and Farrell 80 to drop out of contention, while Griffin managed a level par 72 to finish on one under.

During the second round Rafferty moved to five under with a birdie at the par four second, but then bogeyed the par three fifth. However, back-to-back birdies at the sixth and seventh saw him turn in six under for the tournament and he got to nine under with three to go after birdies at 10, 14 and 15.

But Rafferty, who was playing his sixth competitive round in five days having been away with Ireland at the Home Internationals in Wales, admitted the fatigue finally caught up on him on the par three 17th when he overcooked his pitch from the right of the green and took two putts for a bogey four,

He then missed the par four 18th green with his approach, but found enough energy to get up and down for par and finish on eight under and six clear of Dunne.

“It was two steady rounds,” said Rafferty afterwards. “I was slow to get going, but the eagle on six gave me the kick-start I needed. In the second round after I birdied 10 I had chances on 11, 12 and 13 and just missed. A couple of years ago that would have got me down, I would have been upset that I didn’t get one of them and the whole round would have gone to pot. But I stuck at it and birdied 14 and 15. Seventeen was when the tiredness really kicked-in and the concentration levels were really low, but it was nice to hole a putt for par on the last and not finish with a bogey.”

Rafferty acknowledged that his win in this tournament two years ago kick-started his emergence as one of the top players in the country during which he has established himself as an international squad member and captured this year’s South of Ireland Championship, his first major title.

“I started this year by winning the Laytown & Bettystown Scratch Cup, I’ve won the South of Ireland Championship and now I have won this so it’s nice to have won those trophies and the Inter-Varsities Cup as well. It has been a good year even though I missed a couple of cuts at the wrong time of the year, but I didn’t get down on myself. I am maturing and accepting what will be, will be,” said Rafferty.

He will now take a break from golf before returning next month to lead Dundalk’s bid for a first national title at senior level when they compete in the AIG Barton Shield All-Ireland finals at Thurles Golf Club.

“It’s been a long year, the body is starting to ache a little bit so I’m looking forward to a bit of a break before the Barton Shield.”

Dunne’s course record in the afternoon, when he shot a bogey free nine under par 63, was one better than the previous best set by Dundalk’s Aaron Grant last year.

It was also a massive 16 shots better than his first round total of 79 in the morning, but it was during that round that the seeds were sown for his record score.

“I was not swinging it well the last few weeks, but I figured something out on the 16th this morning and when I was going down the first in my second round I said to Evan Farrell that I was going to birdie every second hole and shoot nine under. I’m glad I kept my word,” said Dunne, who finished six shots behind Rafferty in second place on two under.

Dunne’s 63 was made up of seven birdies and an eagle at the par five 10th when he holed a putt from off the green after a three wood approach shot.