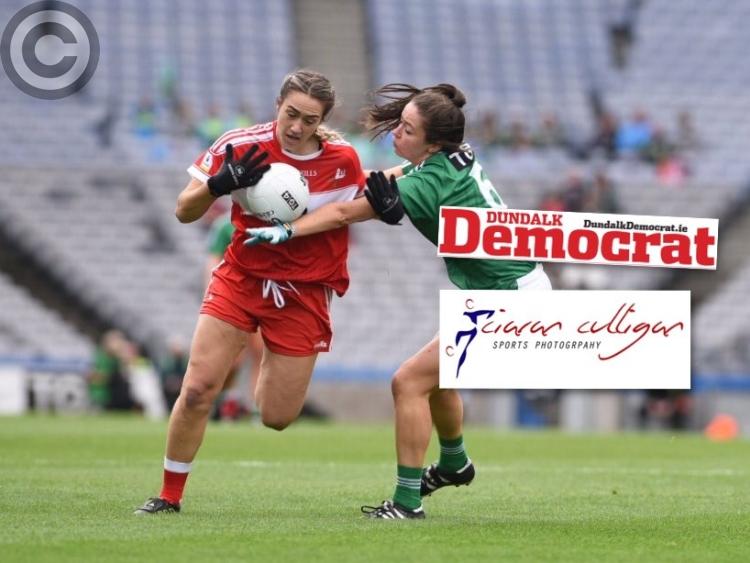 Dreams by Dolores O’Riordan has been synonymous with Limerick’s recent success, success which continued at Croke Park on Sunday afternoon as Louth were left with an all too familiar sinking feeling.

Their fourth All-Ireland junior decider in the decade was anything but the stuff of dreams, rather a nightmare and one which they were made endure for what seemed like an age.

With so many young players lining out, Cooley Kickhams’ Lauren Boyle - who had top-scored in Louth’s run to HQ - included, there was always a fear that the magnitude of the occasion - and the Jones’ Road setting - might get to them.

And it did, though to accuse inexperience as being the sole contributor to the defeat would be wrong as Limerick were excellent and rampantly ruthless, hitting the net on three occasions before half-time.

From there Louth were struggling in deep waters as Limerick’s prevalent tide proved too much. Éimeár Murray had a fine outing in the Louth full-back line, but, in general, the Wee County chased shadows.

They started brightly, but in failing to take their early opportunities, Limerick were let off the hook. And the Shannonsiders were clinical, having opened their account through a Catríona Davis free on 15 minutes, which cancelled out Louth captain Kate Flood’s earlier opener.

The game’s decisive spell came during the early part of the second quarter, where the girls in green found the net three times in five minutes. Louth, with 12 and sometimes 13 players in their own half, couldn’t get out as Limerick zipped the ball around the periphery before making harrowing darts through the Reds’ backline.

Corner-forward Maireád Kavanagh was lethal in the match-winning period, scoring the game’s first major on 18 minutes - her shot was goalbound, though the deflection it took off the diving Éimeár Byrne ensured that it looped beyond the reach of Una Pearson.

And Pearson was picking the ball out of the net again within three minutes. No. 11 Rebecca Delee, better known as a camogie player, blasted an unstoppable effort into the Canal End as Louth’s defence were once more caught static.

They led 2-2 to a single point by that stage, and Kavanagh’s second goal, a powerful flick from Davis’ dropping ‘45, compounded the spell of carnage. Ten behind at the changeover, what could Louth manager Darren Bishop do to turn a game which was already irretrievable?

An attempt was made courtesy of the first three second half points, Flood scoring the Wee County’s first point from play on 38 minutes. And they got it back to seven, with Flood and Boyle on target soon after, but then came another pair of critical blows. A wonderful goal from Cliona Ní Cheallaigh preceded a fifth three-pointer, Delee bagging another, as the scoreline’s look made grim reading; 5-2 to 0-4.

The final eight points were shared, as Boyle brought her tally to four. However, the registers garnered little reaction from the Louth players, who knew their fate was sealed. Midfielder Rebecca Carr also spent the closing stages in the sin bin after receiving a yellow card.

A disappointing end to a unique season. Despite defeat, the Louth players can take heart from their efforts in merely reaching the September showpiece, especially given the circumstances of their year. A lesser team wouldn’t have made it so far and with the age demographic reading so young, this remains a team with a promising future.