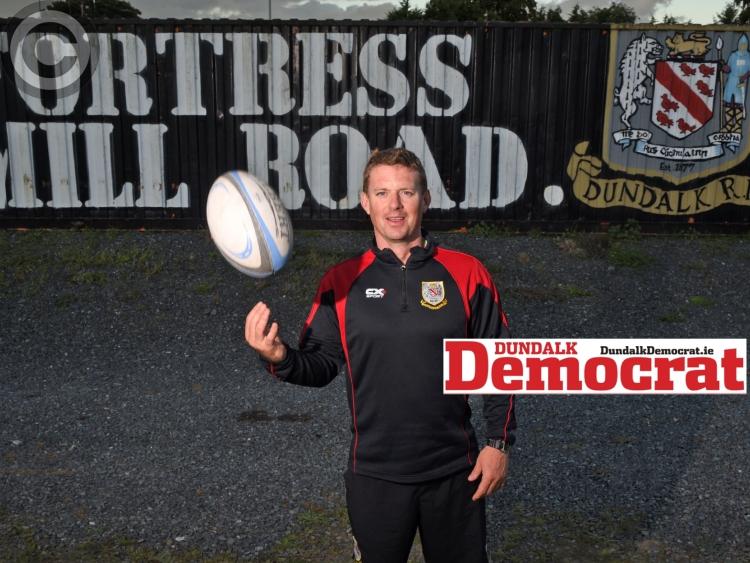 Painted on the side of the kit store at Dundalk RFC, adjacent to the main pitch, is a battle slogan. ‘Fortress Mill Road’, it says, when, disappointingly, their home sod proved anything but daunting for oppositions last season.

Four of six league defeats were accrued locally, compared with five wins from seven on the road. It all culminated in a rather damp ending to the campaign, especially as they looked strong promotion contenders early in the new year.

They host Gorey on Saturday (kick-off: 3pm) looking to get off to a winning start and it’s an outing head coach Mike Walls knows his side need to win. After all, Division 1A is far from a compromising environment.

“Starting with a win just gets everything up and running. It makes the following week’s training that bit easier.

“The home form wasn’t good last year, we didn’t perform. We did well on the road and sometimes it can be easier to perform on the road, but this year there’s a real emphasis on this being a hard place for teams to come and play.

“Individually and collectively, we have to make it a hard place for other teams.”

Pre-season has gone well. They returned to training in July and won two friendly matches before most recently taking on Malahide where former Irish and Leinster prop Mike Ross put on a session of sorts.

The general aim is to improve on last year’s effort, which yielded a third place finish. Promotion is thus the only realistic target and Walls was unable to deny that.

“We ended up in third and at times we were looking at the promotion spot, though, by the end, third was probably the best we could finish.

“We beat both Ashbourne and Enniscorthy and when you beat the two teams that finish about you it turns out to be a relatively frustrating season because obviously there’s games there that we lost that we probably shouldn’t have. But that’s the way it is, if you don’t get your game right on a Saturday, home or away, you’ll be turned over.

“We’re looking to improve on last year. We didn’t feel that we played above ourselves consistently enough and if we could get more consistent, I feel we can improve on third.”

There has been some squad turnover since March, however. One of their form players last year, lock Hamish Walker has return to New Zealand, but arguably Dundalk’s biggest loss is out-half Gearóid McDonald, who has left for America through work. Top-scorer Derek Williams and prop Jonathan Gray - both members of the Leinster interprovincial-winning junior panel - will also be absent for the immediate encounters.

Ben Mortimer, a new signing, has come in to fill the void left by Walker, along with player/coach Niall Smullen who suffered with injury last term, while Jack Kirwan has returned to the club and will provide a further back row option. Among their more high-profile additions, New Zealander Sam Weber, brother of one-time All Black, Brad, is a utility back who, judging by video footage, could step you in a phonebox. He’s certainly one to keep and eye on.

But generally the club’s focus has been on graduating more youth players into the fold, with scrum-half Jack Hughes - who made it debut in the Towns Plate last season, Caoilin Traynor, David Murdock and Jack Connolly all in contention for roles this weekend.

And Walls is encouraged.

“Since I’ve been here we haven’t had such a good core number of young lads coming through at one time and that bodes well for the future because you can’t really be relying on getting guys in from abroad or being lucky with a guy coming here for work. Breeding the young lads and getting them through is going to be a big thing.”

Walls will be lining out at No. 9 on Saturday “if picked”. Let’s hope he makes the right call, and that Dundalk can get off to a winning start.