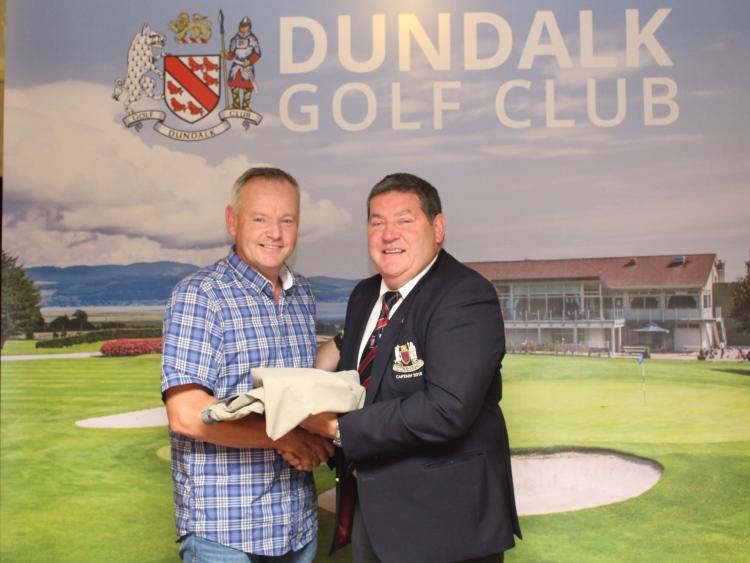 Having led home the Sunday qualifiers in the recent Captain’s Prize, and got cut as a result, Gregory McCaughey showed on Sunday that he has now adjusted to his new seven handicap when he won the Past Captain’s and Members Stableford competition. McCaughey shot a super round of 43pts over the green course to take his first overall victory of 2018 by two points from Jimmy O’Connor (20) and Terry Conlon (7).

He got off to the best possible start by picking up nine points from the opening three holes as he scored three point birdies at one and two and a three point par at the third. Although he could only manage one point when he bogeyed the par three fifth, he more than made amends when he birdied the par five seventh for a further four points.

That helped him turn with 22pts and another three point par at the 11th was followed by three point birdies at the 13th and 14th before back to back three point pars at the 15th and 16th. He could even afford the luxury of no points at the 18th, following a double bogey six, and still win by two clear points.

It was also a day to remember for 11 handicapper Brian McDonnell who had a hole in one at the fifth as his wedge, from 120 metres off the tee and into the wind, took two hops before rolling into the hole. Brendan Keane (11), Bobby McCarthy (16) and Mark Coan (26) took the category prizes with Cillian Halpenny (20) taking the juvenile prize.

Two members of the club’s senior panel, who are currently preparing for the Barton Shield All-Ireland finals in Thurles in October, also featured among the prizes after excellent rounds. Eoin Murphy (+1) took the Gross Prize with 39pts while Conor Curran (2) was second in Category 1 with 40pts.