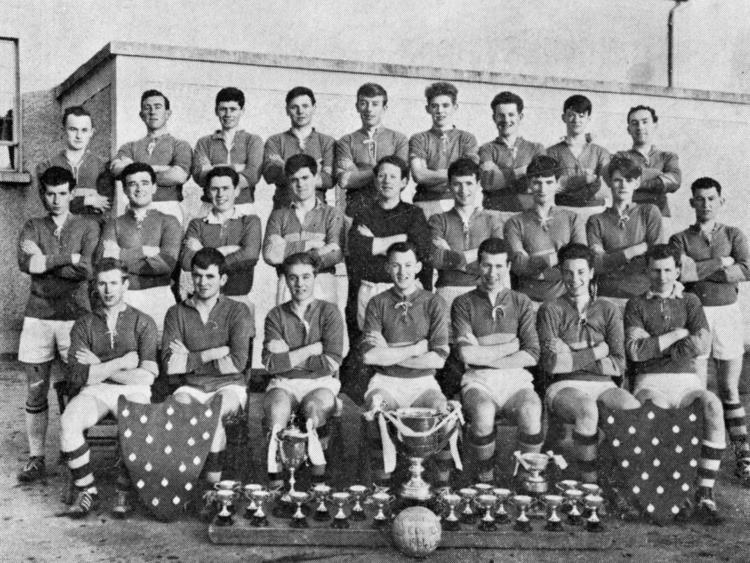 Cooley Kickhams will play their first knockout championship match outside the senior grade for 54 years on Sunday afternoon when they take on Naomh Fionnbarra at St. Brigid’s Park.

And it’s funny how things work, because the Fr. McEvoy Park club’s last ‘do or die’ affair in the lower rank also came against the Togher men, and was also played in Dowdallshill.

It was the 1964 Junior Championship final and Cooley won by a single point, 0-8 to 0-7, after a free-conversion by Barney Carroll two minutes from time.

A young Cooley team, Kickhams went on to greatness over the subsequent decades, while Naomh Fionnbarra battled away in the junior grade.

Full-back on the Kickhams team was Jim Thornton, who The Democrat reported as having a marvellous game, despite his tender years. Thornton, still a regular at Cooley games, was just 19 in that all-conquering season where they claimed league, championship and MacArdle Cup wins.

“All I did was play football,” says Thornton. “That time you didn’t pass any heed on what anyone said, you just went out and played. Anything we did was adventurous, it was a new style of Cooley football, more lively and more athletic. There was a lot of young blood.

“Cooley were after going through a very lean period from the 50s. There was an air of depression about the place. They weren’t going well at the senior grade and they regraded back to junior.

“But a new generation of players came, myself, Harry McCarthy and a lot of other, younger players. It was a new era for Cooley so getting to the final was a big occasion and naturally enough we only won by a point.”

Another to enjoy a fine outing in that November clash was Peter Shevlin, whose fielding was a feature of an entertaining match. Unfortunately, though, it’s a game which Shevlin, whose son, Aidan, won several Senior Championship medals with Stabannon Parnells, fails to remember fondly. He was, of course, on the losing Naomh Fionnbarra selection.

“It was decided by a late, disputed free. The late ‘Sogger’ Quigley was the referee. Barney put it over and we were very disappointed because we were underdogs going into that final, but we played out of our skins.

“We were devastated because we had that match and we lost it. We didn’t get the breaks. The previous week we played the Dreadnots in the MacArdle Cup semi-final and it was a ‘free for all’. We lost our leading player, Joe Murphy, and another chap called ‘Markey’. I’ve no doubt had Joe still been there we’d have beaten Cooley that day.”

Carroll, the match-winner, sustained a blow to the head in the encounter, as Thornton entertainingly recalls, but recovered himself to kick the crucial score.

“He went off with a blood wound and he came back on like an Indian with a white bandage, it looked like a lump of a sheet around his head, and there was a red spot in the middle of his forehead!”

The teams’ fortunes turned thereafter. Cooley reached senior deciders in the years to follow, a feat which Thornton credits much of to Father Brendan McEvoy’s ‘stabilising’ influence having come to the parish in the mid-50s, while the ‘Barrs remained ‘championshipless’ until winning the 2001 intermediate title.

On Cooley, Thornton says: “We laboured then for seven years before we won the Senior Championship. We got to two finals in ‘65 and ‘66. We got the… kicked out of us in ‘65 by the Blues and then we learned and were only beaten by a point the following year.

In contrast, years of pain were to follow for Shevlin, who, having played alongside his brother, Willie, was selected to play for Louth following his junior final performance.

“Absolutely, that knocked us, but it was no different than before my time when they had a great team of Rogers’ and Butterlys and Woods’.

“There was three men put off when they played the great Blues team (1958). The Blues beat them by two points in Castlebellingham and the Blues went on to win a string of Senior Championships after that. It knocked us back, that defeat, because the following Sunday when we played Cooley in the MacArdle Cup they just ran through us.”

Junior final defeat would again be tasted in 1973 when Sean O’Mahony’s halted their charge towards the highest ranks.

“I missed out on championship after championship with the Finbarrs and I played for quite a long while,” Peter added ruefully.

DIFFERENT TIMES
Football was different in those times. Indeed, each of the pair have their own gripes with the modern game.

“It was catch and kick, pass and solo, that was it, but now when I look at the matches on television, thank God I’m not in Croke Park trying to look at it. The way you have 15 men behind the ball (and passes) from goalkeeper to right-full to half-back to centre-field and back again. It’s depressing stuff,” added Shevlin.

“But Cooley don’t play that game today and that’s what I like about them. They stick to a more traditional game. What I seen of them, they kick it down the middle and may the best man win!”

Thornton is less positive, on both points.

On the modern game: “We played in an era when nobody had hamstrings or groins. And quite literally, if you’d a pain in your bol**x, you were ashamed to tell anybody. You just soldiered on and if you declared you had a problem, it was a sign of weakness. There were no physios, the only massage you got that time was from someone in the club who had a big pair of hands and a bottle of wintergreen.”

Cooley’s relegation from the Senior Championship last year was another point of consternation. As dramatic as it may seem, he admits that it knocked a lot of the elder clubmen, who had built the Kickhams dynasty over the decades.

“For the older generation, it was a knife in their hearts. You look at the records, Cooley have the longest period of senior football in the county, 79 years. It was a dagger in our hearts and it was sad.”

THIS WEEKEND
Both are planning to be present on Sunday and while one of them will watch their team win, neither are overly confident.
Thornton picks St. Fechin’s as the team to watch in the intermediate grade, while Shevlin is “hoping the Finbarrs get across the line”, but reckons Cooley may be too strong.

In that ‘64 meeting, according to these pages, “such was the excitement in the Cooley camp that the players were on their way to the dressing room without the cup, and had to be called back”.

There is no trophy at stake on Sunday, rather a season. If not for the ‘Barrs, who have a league play-off to contest, for Kickhams who must follow in the footsteps of Thornton and co.

Another guarantee, says Thornton, is that “there’ll be less fishermen and less farmers playing this time!”