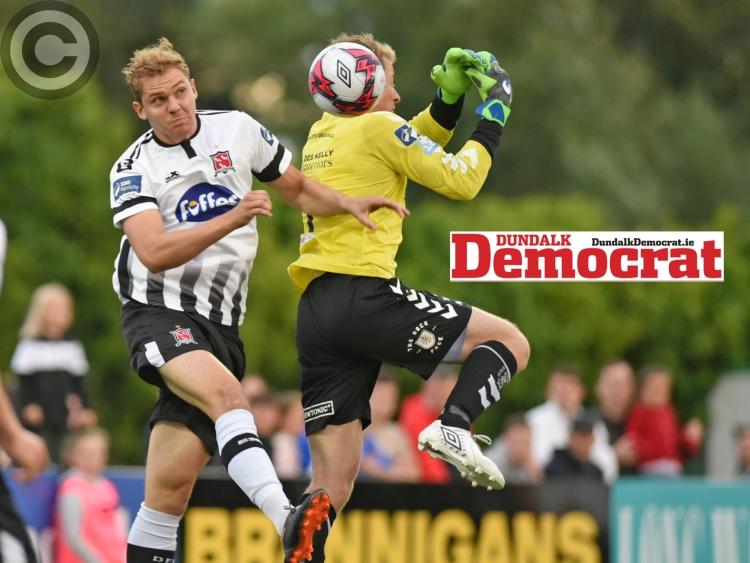 Finn Harps, for one, would likely have been happy to see the back of Georgie Kelly from the First Division title race this year following his summer move from UCD to Dundalk FC.

The Donegal man struck four times in just two meetings against the club from his native county in the early part of the campaign, including a hat-trick in the Students’ 3-2 win at Belfield and another at Finn Park.

But, just when Ollie Horgan thought his nightmares about the big, blond striker were over, between them, Dundalk underage coach Mick Neville and journalist Philip Quinn managed to pair the Lilywhites and Harps in last Monday night’s FAI Cup second round draw, a match which goes ahead at Oriel Park on Friday.

Kelly says it wasn’t a tie he thought about when watching the names being pulled, perhaps UCD was his fantasy match-up, yet the game with Harps presents something of a family occasion for the 21-year-old.

“It’s going to be nice to have family and friends down and to see people,” Kelly said, while wearing his customary friendly grin.

“It was the same with UCD this year when we played them, the family were down and there are a lot of connections, with friends and former coaches involved.

“When I saw the draw, I wouldn’t say that I was delighted because they’re a tough side and they can be physical and hard to beat, but it’s going to be a nice occasion… I’m looking forward to it.”

Considering his prolific record against the 1974 cup winners, one could be forgiven for thinking Harps’ porous defence from last season has been a recurrent trend on their return to Division One.

But Kelly assures that that’s not the case, having felt their physicality first hand.

Maintaining his excellent scoring record would go a long way to booking Dundalk’s place in the third round, provided manager Stephen Kenny gives him the nod as the Lilywhites encounter a busy run of matches.

As a supporter of Harps’ great rivals, Derry City, getting on the scoresheet would be somewhat sweeter too. And, if he does register, it would also be his first goal for the club.

“I would have been a Derry fan growing up, but, as I say, the connections were always there with Harps.

“I’m from Donegal, but I’m only 10 minutes from Derry city whereas Ballybofey, I’m probably 50 minutes away.

“The first goal is always going to be tough, you’re maybe over-eager, but once I get it I think I’ll settle.

“It can always be the case that you’re trying too hard.”