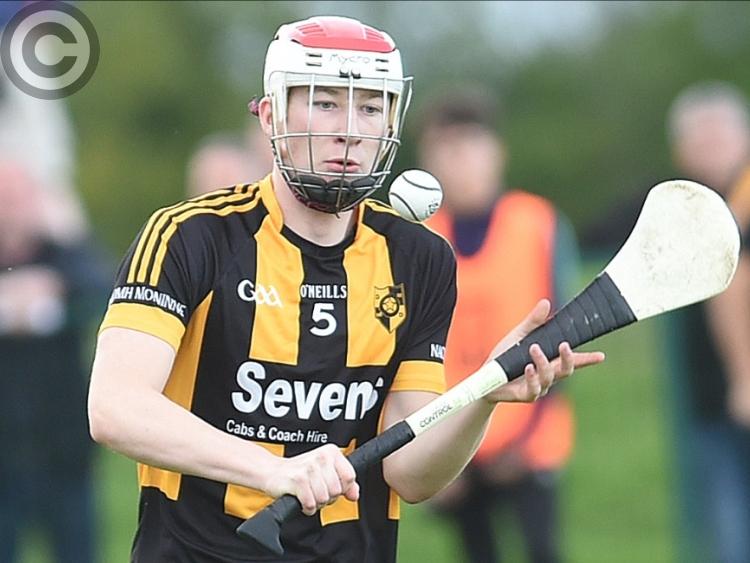 Holders Naomh Moninne still have one hand on the Paddy Kelly Cup as they got themselves back in contention for Senior Hurling Championship honours thanks to this hard-earned, but deserved victory over Mattock Rangers in the first of the double header at Darver on Thursday night.

Underdogs going into this match, Mattock did not show it in the early stages and grabbed the opening three points from midfielders Gary Rellis (2) and Jason Condon.

Moninne drew level on 12 minutes when full-forward Pádraig Fallon, who was making his first championship start, found the net from the left of the post.

The Collon outfit went in front again when Graham Condon pointed from 40 metres out, but they would soon find themselves behind courtesy of a good brace of points from play from the impressive Philip Englishby, 1-2 to 0-4.

Fallon found the net again on 28 minutes to extend his side’s lead and in the time that remained to the break, Rellis and Darren O’Hanrahan exchanged points to leave Brian Brady's side in front at half-time, 2-3 to 0-5.

The black and amber outfit outscored their opponents by five points to one in the opening eight minutes of the second half with Englishby and Ronan Geoghegan accounting for two each and the other being scored by hard-working half-back Stephen Rafferty.

They effectively sealed this important victory on 39 minutes when Feidhelm Joyce soloed through before firing past ‘keeper Ken Tobin for goal number three, 3-8 to 0-6.

Moninne failed to add to their tally over the next 10 minutes, recording four successive wides before Mattock, to their credit, replied with three unanswered points from the sticks of Michael Callan, the ever-youthful Tony Corcoran and Rellis.

Goal number four for the holders was scored by O’Hanrahan on 52 minutes when he got the vital touch from close range to Darren Geoghegan's long delivery.

Their fifth goal was scored by substitute Dáire Flanagan who fired past the keeper on the half volley from the right of the post. The Collon outfit did manage a late consolation goal in added time when Patrick Birch fired home in a goalmouth scramble.

It fell to young Darren Geoghegan to wrap up the victory for his side with the closing score from a 35 minute free. It was the Moninne supporters who welcomed the final whistle and with it the victory where they can look forward now to their clash with Knockbridge on Thursday night.