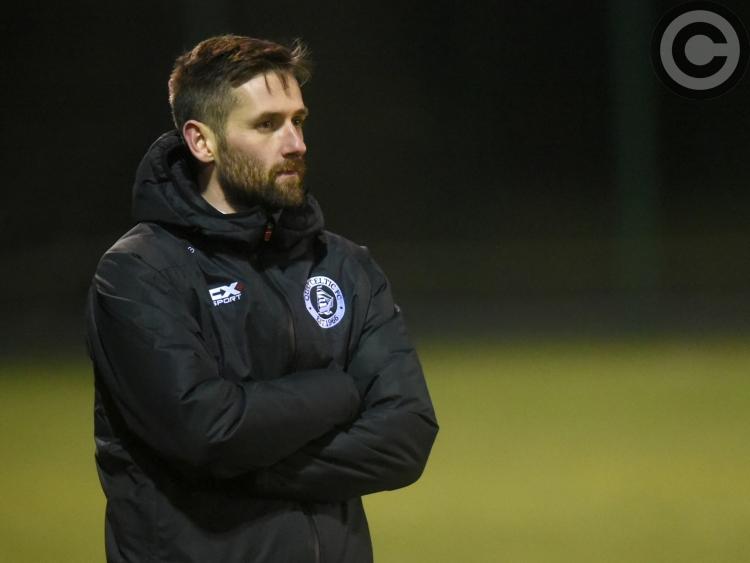 Martin Smith scored his second goal in two games as Muirhevna Mor maintained their 100% start to the new season with a comfortable 2-0 victory at home to Duleek on Friday night.

The title favourites put in a dominant display without having to shift through the gears, scoring either side of half-time to earn the spoils ahead of next weekend’s visit to their old foes, champions Newfoundwell.

Smith signed from Quay Celtic ahead of the campaign’s kick-off, effectively replacing his namesake, Billy, in the Blues’ attack. And he has wasted little time in forging a relationship with strike-partner Tiarnan Mulvenna. The former Dundalk FC man has assisted Smith with both of his goals.

The pair linked for the opener. A fine ball over the top freed Mulvenna down the right flank and his perfect delivery handed Smith the opportunity to put the ‘Mor in front, which he duly did.

Beforehand, Gary Clarke had rattled the ‘bar as Paudi Hearty’s charges probed for a breakthrough.

The second half was another largely one-sided affair, though the only goal was self-inflicted as a Duleek defender turned Brian Begley’s cross into his own net.

That sealed the Meathmen’s fate and ensured Muirhevna Mor of the outright lead at the top of the Premier Division table.