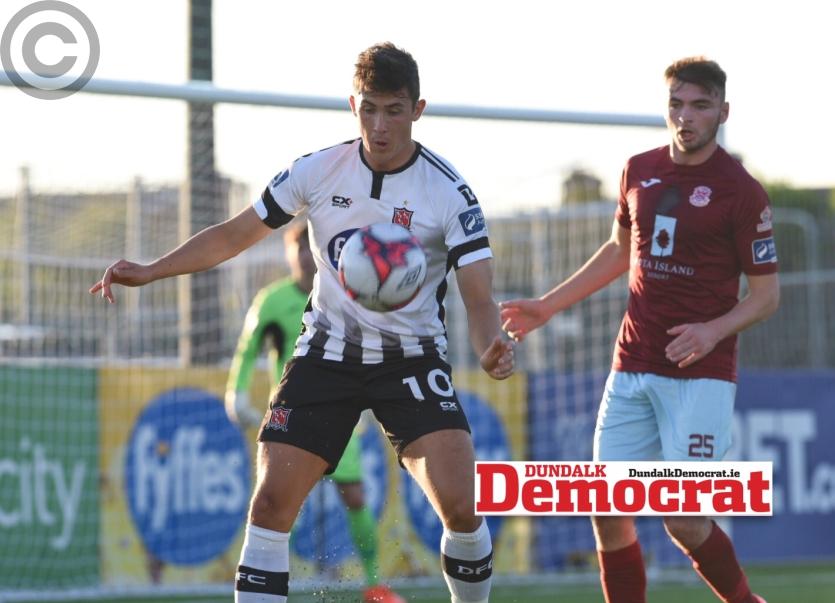 Dundalk FC progressed to the second round of the FAI Cup with a comfortable victory over Cobh Ramblers at Oriel Park on Friday night.

A sluggish performance for lengthy spells, Ronan Murray's goal on 31 minutes broke the deadlock and from there the outcome was in little doubt, especially after Jamie McGrath added his name to the scoresheet early in the second half.

“It wasn’t our best performance, but you’re not going to win the league with 11 players and we needed players who haven’t been playing to get minutes,” said Stephen Kenny of his team’s display.

“We started slowly, but as it progressed we played better and we’re through, that’s the main thing.”

Cobh, in fairness, offered a threat, but many of their openings came as a result of sloppy play by the hosts as the Dundalk's stuttering form continued into their second meeting with the Cork side in five days.

But the alterations in personnel didn't inflate the Lilywhites as Cobh, who made limited changes, weathered an early flurry before settling into their groove, going close through Jaze Kabia and particularly Shane O'Connor, whose vicious shot whistled narrowly wide.

Typically, Michael Duffy was involved in the move which earned Dundalk the lead. His 21st assist of a stellar campaign, the winger's ball across the six-yard box handed Murray the simple task of converting to the empty net.

Leading by that strike at the break, McGrath neatly found the bottom corner six minutes into the second period to double the advantage, showing inside before wrong-footing Adam Mylod with a shot beneath a glut of Cobh defenders.

Stephen Henderson's underdogs almost halved the deficit midway through when winger Denzil Fernandes stung the palms of Gary Rogers. The Lilywhites finished the stronger, though, and should have extended the gap on multiple occasions, with Daniel Cleary and Georgie Kelly, among others, unable to convert.

But a third goal would eventually arrive six minutes from time when Murray directed Seán Gannon's right-wing delivery to the bottom corner as the 10-time winners move into last night’s draw, avoiding a repeat of their 1983 FAI Cup loss to the Rams.

They also went some way to atoning for the recent EA Sports semi-final loss to Cobh, a result which “embarrassed” Kenny.

When asked if the latest victory would lift his players out of their so-called ‘post-European slump’, the Dubliner said: “We’ve nothing to apologise for. The players made some mistakes which can happen. People need to get real.

“On the other side of it, there was a huge effort from everyone in the town, a massive effort (in support of the team in Europe), and I must say that I’m touched and encouraged by the huge effort of the residents, the business owners and people driving in cars with flags.

“We were in the following morning for training and I saw people with cars with flags coming by me and I felt a bit embarrassed having lost down in Cobh.

“We’re on the most successful run in the club for 100 years, but I did feel embarrassed."