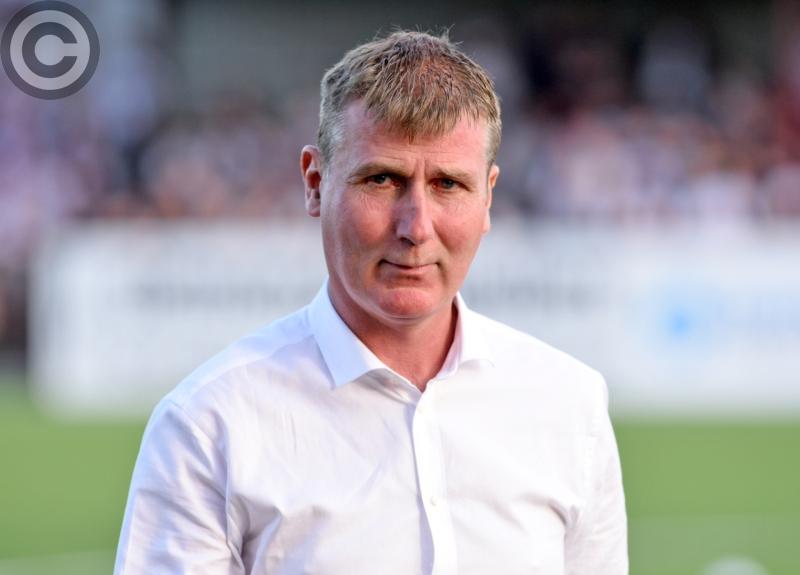 Stephen Kenny, I’m sure, always warns his players against straying offside before sending them out to war. He knows the very best of goals can sometimes be cancelled by a player losing his bearings, getting himself into forbidden territory.

Stevo takes pencil to paper to write an article whenever Dundalk FC’s hugely competent communications committee produce a programme, which is nearly always for a home game. He had one in the programme for the recent Europa League qualifying match against Larnaca, and in it, I feel, got himself into an offside position.

In offering his tuppenceworth on the Liam Miller saga, he said the Miller family “are currently being treated without dignity by the GAA authorities in Cork”. He then added: “When Damien Duff called the GAA committee dinosaurs, he was doing dinosaurs a disservice in a situation that has angered GAA greats like Billy Morgan and Dave Barry”.

For what it’s worth, I’m glad the game is being played at Páirc Uí Chaoimh and believe Croke Park was right to allow it go ahead there. As with its decision to allow soccer and rugby to be played at Croke Park when the Aviva Stadium was being built, the GAA has avoided odium being heaped upon it.

Back in 2008, the IRFU and the FAI were looking at the prospect of having to take major games across the water, but were bailed out - at a price, of course.

No money will be accrued this time, just a lot of goodwill, though I haven’t heard any of those who were most vociferous in their criticism of the GAA when it seemed the Miller game would go ahead at Turner’s Cross giving the Association any credit.

And on the question of money: while the point was forcefully made by sections of the news media as they once again jumped on the neck of the GAA  that the government granted €30m for the reconstruction of Páirc Uí Chaoimh, no mention was made of the GAA’s own contribution of upwards on €80m to the project.

It wasn’t in the Cork County Board’s gift to allow the game to be played at their headquarters - the decision would have to be made in Croke Park. There was a protocol to be followed, and unlike the associations which govern Stephen Kenny’s game at national and international levels, Croke Park treats transparency and accountability as vitally important. It explained exactly how its decision to open the Páirc Uí Chaoimh gates had been reached.

The committee, the Central Council, which met on last Saturday week to endorse the decision made the night before by the Management Committee to permit the game to be switched, has among its members a representative from each county sitting on it. All of them work voluntarily. Had a majority of them voted against Páirc Uí Chaoimh being made available, the game would not be played there. As is now well-known, that wasn’t the case.

Are these county representatives and others the dinosaurs Duff was talking about? If they are, what name had Stephen Kenny got in mind for them when he sharpened his pencil?

It might interest the Dundalk team boss to know there are many who go to Oriel for the big matches who are dyed-in-the-wool GAA people. Gaelic football is their game, but they still want to see the local soccer team play - and win. They, like regular Orielites, acknowledge the excellent job Kenny has done to revive Dundalk’s fortunes; but a number of them to whom I have chatted who were at last Thursday week’s match weren’t impressed with what they read in the programme.