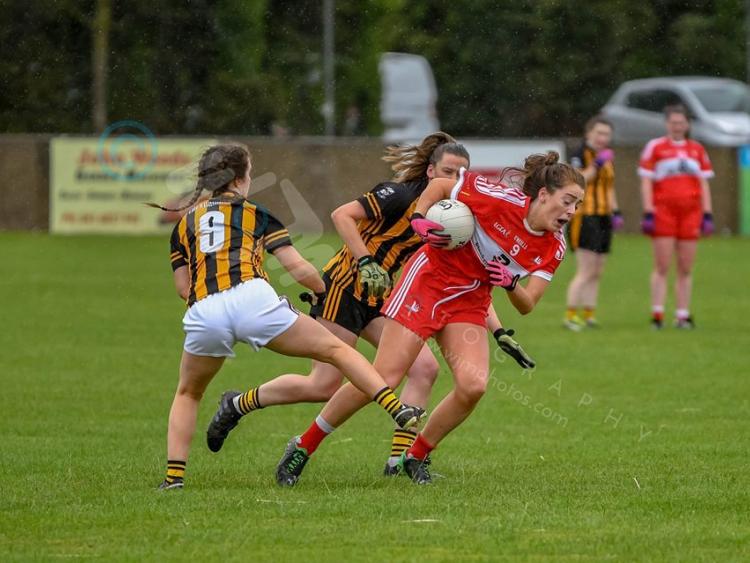 Alanna Conlon top-scored with 3-6 as Louth ladies qualified for the All-Ireland JFC semi-finals at Stabannon on Saturday.

For the third time this year, the Wee County brushed past Kilkenny in sealing their place in the last four.

Darren Bishop’s side led 1-6 to no-score after just seven minutes with Cooley Kickhams ace Lauren Boyle opening the scoring with a point before adding 1-1. Another Kickhams player, Niamh Rice also added two points, while Conlon and Jennifer McGuinness got in on the scoring act.

The Reds would post 3-17 before the Noresiders got off the mark with the final score of an incredibly one-sided opening half. Although, in fairness, the Cats’ preparation wasn’t overly favourable having been late arriving at the ground due to traffic congestion on the motorway.

After hitting nine first half wides, on top of their resounding total, the hosts immediately got back about their business after the restart as Conlon added 1-2 to her total before another run of Louth points followed Kilkenny’s second minor.

Conlon completed her hat-trick, as Boyle and Sinead Woods found the target, before, in the dying embers, McGuinness stuck away her side’s sixth goal from the penalty spot.

“It's a good result,” said Louth manager Darren Bishop. “The girls played very well and it was always going to be tough to motivate yourself to play Kilkenny. They were bottom of the group in Division Four and they’ve had a very tough championship campaign.

“But our girls can only play what’s in front of them and I think they did. 6-24, it’s not bad, but there is definitely things to work on, probably the misses more so. We could probably have added 3-6 or 3-7 to our total.”