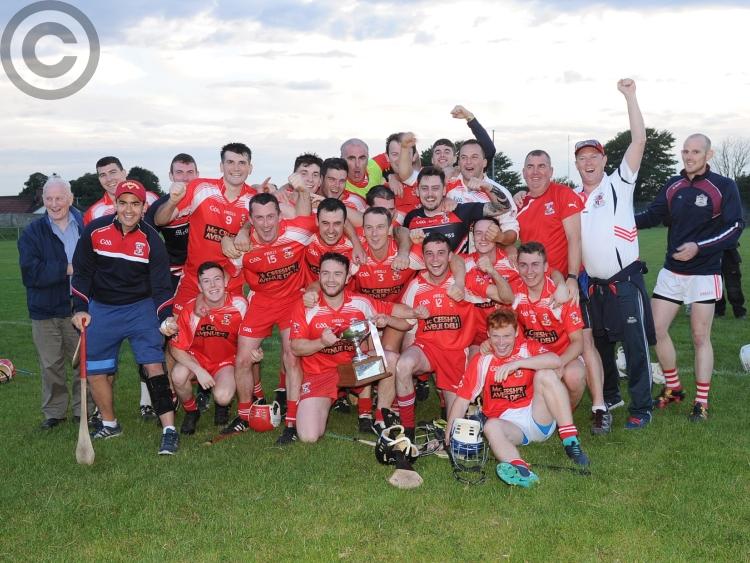 The Reds launched a stirring comeback having trailed by seven points in the run into half-time to claim the silverware, with ace marksman Shane Fennell top-scoring, shooting 0-12.

Fresh from victory in the opening round of the championship, points from Liam Molloy and Fennell had the ‘Bridge in control before Moninne responded as Darren O’Hanrahan opened their account.

The game’s opening goal followed when Knockbridge centre-forward Peter Brennan soloed through the Black and Amber’s defence before firing past ‘keeper Donal Connolly.

The sides exchanged the next two points before Stephen Rafferty got on the end of a John Martin ball across the square to volley home Moninne’s opening goal on 11 minutes. The sides were level at 1-3 apiece on 14 minutes thanks to Darren Geoghegan’s second point of the half.

The same player then fired past James King from a tight angle left of the post on 18 minutes followed by a good point from his older brother, Ronan, to show Moninne four in front.

A third goal followed when John Martin blocked a clearance from King and when stalwart Diarmuid Murphy fired over from range, Moninne led by seven.

Knockbridge cut the gap before the break as points from Fennell preceded a major from Molloy, who touched around the outrushing Connolly.

Nonetheless, Moninne still led at half-time, 3-6 to 2-7, and the gap was extended by Darren Geoghegan and Philip Englishby on the restart.

But the Reds hit form and reduced the deficit to just one with four quickfire minors and the Villagers levelled through midfielder James Costelloe.

Moninne managed to stem this run of scores when Darren Geoghegan took his personal tally to 1-5 with a pointed free. His side also managed late points from substitute Ultan McEnaney and Murphy, but Knockbridge sealed the win with a further brace of Fennell points.

Afterwards, the Paddy Rice Cup was presented to Smyth by the County Board chairman Des Halpenny.