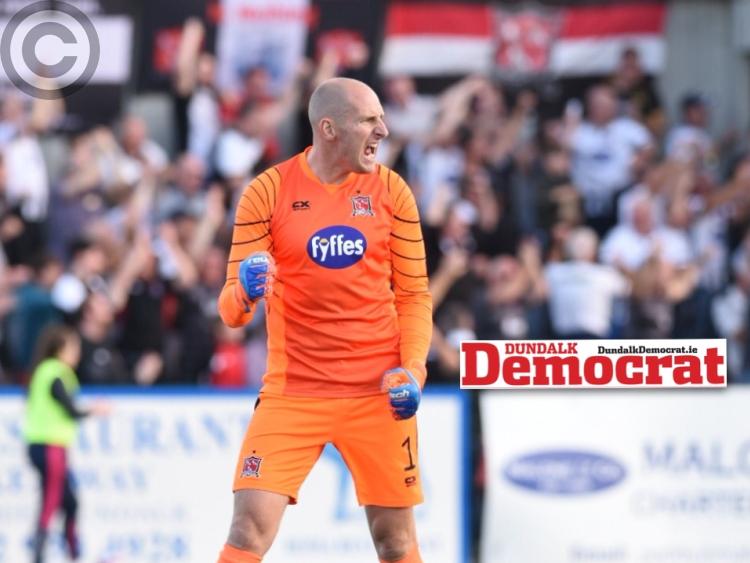 An ad. on the back of this week’s Democrat read: “The Boys are Back in Town”, and they didn’t disappoint.

On their European return to Oriel Park, there was a goal to grace the occasion. The breakthrough, on 31 minutes, from Patrick Hoban was a sight to behold in itself, as he glanced Seán Gannon’s cross to the net. But Michael Duffy’s 10th of the season had more than a touch of the Marco van Basten about it.

Remember the goal the legendary Dutchman scored in the 1988 European Championships final. Well, this may even be better as the winger volleyed, left-footed to the roof of the net from the acutest of angles, connecting sweetly with Jamie McGrath’s lofted delivery.

Pick that out! What a goal from Michael Duffy. @DundalkFC lead Levadia Tallinn 2-1 at Oriel Park (3-1 on aggregate) and you'll do very well to find a better finish anywhere in Europe tonight than this peach of a volley #RTEsoccer pic.twitter.com/ArDW8MxkAt

As the No. 7 raced away to celebrate, the Shed congregation ran towards the Carrick Road end of the ground to greet their hero, while his manager, Stephen Kenny, lept into the night sky like a salmon. It was ecstasy and utter disbelief. In front of Peak6 CEO Matt Hulsizer, it was perhaps the greatest goal Oriel Park has ever seen.

Levadia pulled a stroke back before the break, when Roman Debelko slotted beneath Gary Rogers, but Dundalk’s one-two had the Estonians pinned against the ropes, with no way back, and so it proved.

Fielding the same line-up to the one which won in Tallinn seven days earlier, the opening half-hour was largely chanceless, despite the visitors, whose approach bordered on dirty having had five players booked in total, assuming a foothold, just as they did in the first leg.

Dundalk’s two-goal salvo in just three minutes altered the complexion of the tie, however, and allowed them to manage a second half of few flashpoints.

Victory, Kenny’s 12th as a manager in Europe, saw the Lilywhites create another piece of history. Only once before had the club won both legs of a tie in continental competition - this adds to the double triumph achieved against Luxembourg’s Jeunesse Esch in 2014.

Cypriot outfit, AEK Larnaca, are next up. They visit Oriel next Thursday for leg one.