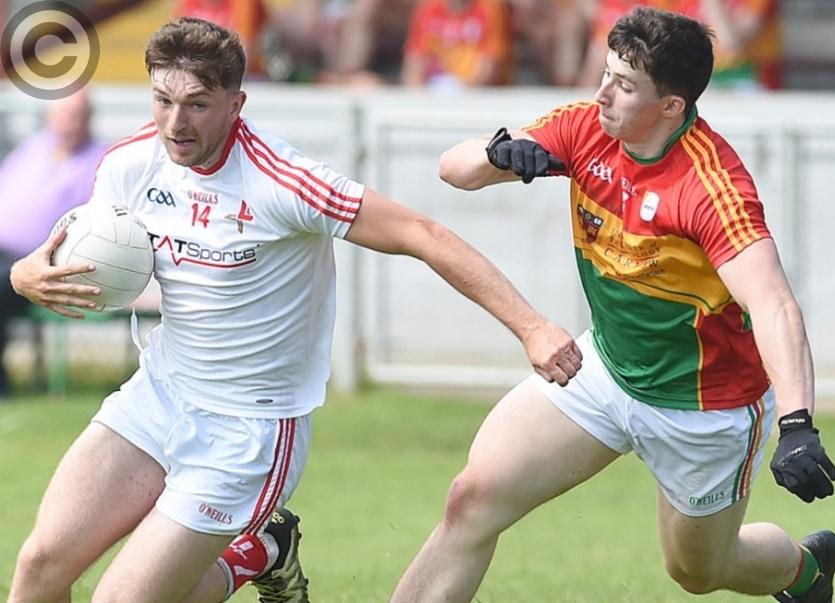 Carlow recovered from nine points down to pip Louth in a thrilling Leinster U20 Championship clash at the Gaelic Grounds on Monday afternoon.

Trailing 3-4 to 0-4 by the end of the first quarter, the Barrowsiders rallied, cutting the margin to just two points at the break, before being dealt another blow early in the second half when midfielder Andrew Kehoe received his marching orders from referee Barry Tiernan.

However, the visitors weren't to be denied, scoring three goals, added to the pair they registered in the opening half, to claim their first win of this year's championship, ensuring the Wee County must win in Offaly on Saturday week (June 16) to have any chance of making the quarter-finals.

Rory Doyle had Carlow ahead in the first minute with a point, but the hosts soon led as Leonard Grey found the net at the second attempt.

However, Carlow, who lost to Offaly in round one, recovered with Andrew Kehoe converting from the penalty spot before Crowley lashed a wonderful effort to the top corner of Alan McGauley's net to cut the gap to just three.

Eoin McDaid stopped the rot for Louth before Crowley added his third point. A pointed free from Louth centre-forward Marry preceded three Carlow points on the trot - from Andrew Keogh, Robbie Kane and Crowley - before Mulroy finished the first half scoring to send his charges to the break two points in front; 3-7 to 2-8.

Fearghal Malone and Callan stretched the lead to four for Wayne Kierans' side upon the restart, however, Kane palmed to the net to open Carlow's account as the travelling contingent found their voices.

St. Mary's clubman Liam Jackson put two between the teams prior to Carlow taking the lead for the first time since minute one, as Ross Dunphy dispatched a three-pointer past McGauley.

Carlow number nine Keogh was then given his marching orders as the Wee County responded to another Crowley point by raising four white flags consecutively, through Mulroy (3) and Gerry Garland.

But, straight down the field, Dunphy turned the scoreline on its head, yet again, scoring his second goal before Crowley put two between the teams entering the closing stages.

Mulroy cut Carlow's lead to the minimum as Louth threw their all to attack, however, Man of the Match Crowley closed out the contest with his seventh point as Billy Murphy's side claimed an incredible win.