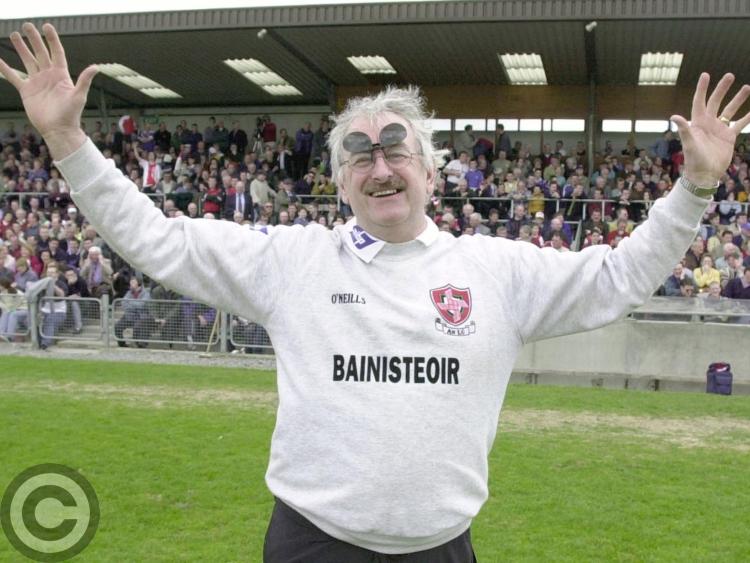 Paddy Clarke was a popular appointment when handed the reins of the Louth senior team in 1997, following Paul Kenny’s three-year stint in the job.

Having reached six finals in three years with Kilmainham Wood in Meath, Clarke had previously won the Louth senior championship title with Stabannon Parnells in 1991 - one of seven senior titles he would claim in counties Meath, Louth, Cavan, Dublin and Monaghan.

“The press kept pushing for me. The press installed managers and the press sacked managers because they influenced the crowd. For a while, when I was lucky enough to be winning an odd championship here and there, the press were saying ‘sure Louth wouldn’t do any harm to give your man a chance. He has a proven record now’,” he says of the circumstances leading to his ratification.

Clarke had twice previously been turned down for the post, in 1991 and ‘94; rejections which took their toll on his family more so than on himself.

There were five candidates upon his successful attempt, two of which were “looking (for) a king’s ransom”, while one of the others had no previous experience. His record made him the outstanding choice, of course, but he was also viewed as “a soft touch”, the easy choice, as he puts it.

His predecessor, Kenny, did a good job by all accounts, though his stances with the County Board were often strong and Clarke feels, at the time, the county’s executive were looking for someone who they could “handle”. He worked under three chairmen in his time, two of which were helpful;  the other was more of a hindrance.

Going against the grain as it were, Clarke insisted on having just the one selector, as was his policy, and successfully so, at club level. Eugene Judge was the man by his side, and he would remain for the entirety of his reign.

“The boys (County Board) didn’t like that, but they went with it because I was the lesser of the other four evils that were there at the start, looking for the job.

“Then, at the end of the first year, some ‘yup’ brought it up at the County Board that ‘he’d be far better off having more advice’ so Stephen Melia was taken in, but sure Stephen was playing which was grand. There was still only two of us on the line.

“I think that was to satisfy some of the fellas who were giving out at the time that we had lost to Meath. Lost to Meath, All-Ireland champions! You know, ‘f**k sake, if any team that reached an All-Ireland final in the last few years, like Mayo or Dublin or Donegal, was to play Louth now there’d be 30 points between them, and we’d only a couple of points between us (then).”

“That was the last sting of the dying wasp, to be honest, but it just shows the small margins between success and failure. It’s the one that got away. Had Breen Phillips stayed on, you never know what could have happened. Seán Boylan may have done something (to combat him), but he was starting to panic big time.”

Phillips had been keeping tabs on Tommy Dowd. More than that, in fact, as Dowd was anonymous before a collision saw the Blues man replaced.

“Breen Phillips had Tommy Dowd in his pocket. I remember Eugene said to me: ‘I’ll tell ya, Paddy, there’s no-one who can get away from him’.”

There was some consolation after the loss in the form of a ‘B’ All-Ireland win over Clare. O’Byrne Cup finals were reached in both of his first two campaigns, even if league performances were of a fairly mediocre standard. However, the Leinster loss to Dublin in ‘99 came in the midst of a transition period where “the golden generation” were starting to fade away.

AHEAD OF HIS TIME
He tried using ‘impact subs’ that day in a bid to outmanoeuvre the Sky Blues, however, it wasn’t part of the GAA players’ mindset and he was somewhat vilified for it.

“It’s not part of the Gaelic psyche”, but Clarke was ahead of his time in this regard. The Dubs, three-in-a-row winners of Sam Maguire, are obedient users of the ploy at present.

In 2000, Kildare were controversial victors in Leinster, leaving him with just one win from four matches in charge over three seasons. The win, of course, coming against Wicklow in ‘98.

The millennial year produced the most outstanding success of his tenure as Offaly were beaten in the Division Two final at Croke Park. Personally, it was a triumph which brought huge satisfaction to Clarke, whose grand-uncle, Jack, was a member of the 1909 All-Ireland final team. It was also a rare occasion where his elderly mother attended a match.

“The league was great. It galvanised the county.

“We got in some fine players, Aidan O’Neill, in particular, at centre-field, and Martin Farrelly, who was a very tentative player and lacked in confidence, his confidence came and he’s a powerful, powerful man; a lot stronger than people gave him credit for and the fact that he came from a great footballing pedigree helped. They enhanced the team that year.

“Nicky Malone blossomed that season, both as a captain, as a leader, and as a player on the ‘40’ because Nicky had got to the stage where he was fed up marking people. When he got onto the Louth team first, he was seen as a real tight marker like Breen Phillips, but, eventually, he got fed up of chasing fellas. Nicky was just marvellous for us that year.”

“The boys were right, they had bought into what we were doing, they were disciplined and there would have been very little adjustments needed to get them to do very well. Naturally enough they would have had the confidence too, but then the ‘foot and mouth’ came and that bucked everything.”

The ‘foot and mouth’ put football in the county almost on hold and Clarke knew his side were under-prepared for the 2001 championship match with Longford, which they lost by two points. Having been told after the defeat in Navan that unless they reached the All-Ireland final they wouldn’t be given another year at the helm, he knew his time was up after the round three qualifier loss to Westmeath.

He speaks on his tenure with little regret, even if the last year was somewhat disappointing. The failure to keep Jim Holland with the panel in ‘99 is another cause of annoyance, though he’s fond of being able to claim that he gave David ‘Skid’ Reilly, Christy Grimes, Aaron Hoey and Mark Stanfield their opportunities.

“The one thing I take from it is: I was still involved with the soccer and this crowd asked me would I do a session with them because the ban (GAA’s rule 27) was lifted and some players who had played with me in the soccer were now able to play Gaelic as well, so I went and did all jazzy soccer drills with them and the boys loved it (and were saying so) when this elder statesman, who played with Louth, walked over and said: ‘that was crap and to be honest with you, you’ll never make it. You’ll never make it in the GAA. Come back to me when you win a couple of championships’.

“So to have got to the top and to have managed Louth; I just smile to myself.”