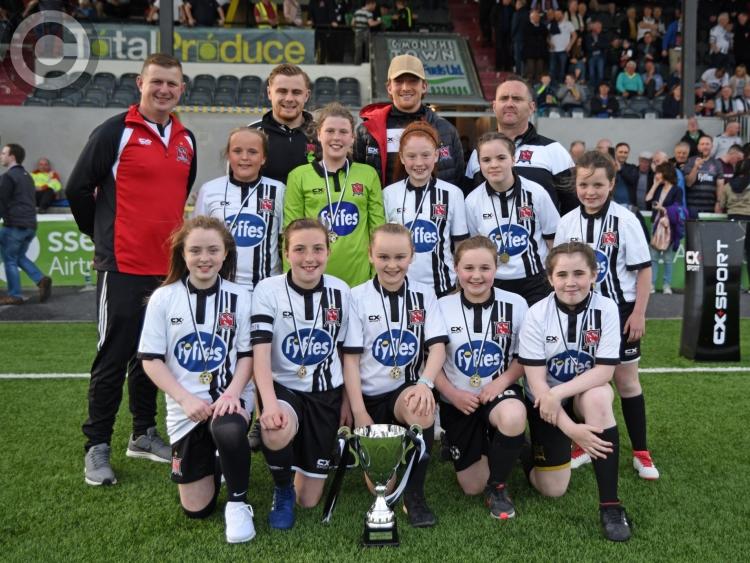 Dundalk U12 girls with their managers and John Mountney and Georgie Poynton. (Pic: Ciarán Culligan)

The girls, led expertly by coaches Bernard Freeman and Gerard Morgan, lost just two games all season and won their league with a game to spare.

They were presented with their trophy and medals at half-time of Dundalk's game with Bray Wanderers at Oriel Park on Friday night. Lilywhites' John Mountney and Georgie Poynton did the honours, with the stand and shed cheering their approval of the town's new young stars.

A 4-0 win away to Verona last week saw the title sealed. The first half was close, and the home side, who had drawn 2-2 at Oriel earlier in the season and were on a fine unbeaten run, did their best to be party-poopers.

However, Dundalk, marshalled well at the back by the trio of captain Maggie Holland, Ciara Whyte and Holly Hughes, as well as 'keeper Alisha Matthews, eventually got the breakthrough in the first half. The goal came from the tireless Annie Stanfield, but Jennifer Freeman, Saibh Morgan and sub Paige Kavanagh had worked equally hard to break down their opponents.

At 1-0, Verona always had hope, but once Annie scored a quite brilliant second, after the break, Dundalk were heading for the title.

Paige and Jennifer - who ended the league season with an astonishing 38 goals in 17 games - added further goals which meant that Clara Howard, Nessa McCabe and Molly Halligan were able to be on the pitch for the moment that the league was won.

Dundalk's first game of the season ended up not counting as the leagues were restructured - a shame for the girls who won 9-1 at Stamullen, Jennifer with four goals and Ciara with a hat-trick.

Next came the MGL Cup and the first of two wins against Premier sides, with Clonee United outplayed 5-2, Sophie Holland, on-loan from the U14s, among the scorers.

Carriglea were then beaten 2-0 as Dundalk progressed to the quarter-finals. It was only Esker Celtic, eventual winners of the Premier Division and the side that went on to reach the final, that ended the cup run with a hard-fought 4-1 win at Oriel.

Meanwhile, as October turned into November, Dundalk's league campaign stayed on course. Dunboyne were beaten 6-2 with new jerseys on show for the first time. Then came two crucial home wins, a 1-0 success over Malahide before Portmarnock were seen off 4-3 and every credit has to go to Chloe Crosby in these games as she did everything asked of her when stepping in with Dundalk missing key players.

With the weather so bad over the winter, there were long breaks between games and the New Year saw the squad boosted with the arrival of Nessa, Annie and Paige.

Ratoath were beaten 8-1 with Nessa scoring twice, but every top side suffers a wobble and the cup exit as well as a 1-0 loss to Malahide and the draw with Verona meant that the girls were in a real title battle as spring arrived.

After some important wins on the road against St. Ita's and Portmarnock, a trip to one of the other title favourites was billed as the game of the season.

What followed was perhaps the girls' most complete performance in their biggest game to date - a 6-0 win over Baldoyle.

There were five different scorers and the only sour moment was a serious-looking injury to Annie. But just to demonstrate the great spirit in the team, she was back and scoring just two days later as Dunboyne were beaten again. Once Baldoyle were defeated at Oriel Park - though the opponents deserve great credit for fighting back in a 4-3 thriller - Dundalk knew the title was in their hands and it was duly sealed against Verona.

The girls should rightly be hailed as a talented and dedicated team, but more importantly, they are lovely group who get on well.

Also, the support of so many should be acknowledged, including the coaches, parents, friends and family, especially those who drove the girls to away games. Dundalk FC also played their part as did Michael Curran while thanks go to the Malt House and Sing Li for providing celebration food.

Hopefully, this is the first trophy of many.