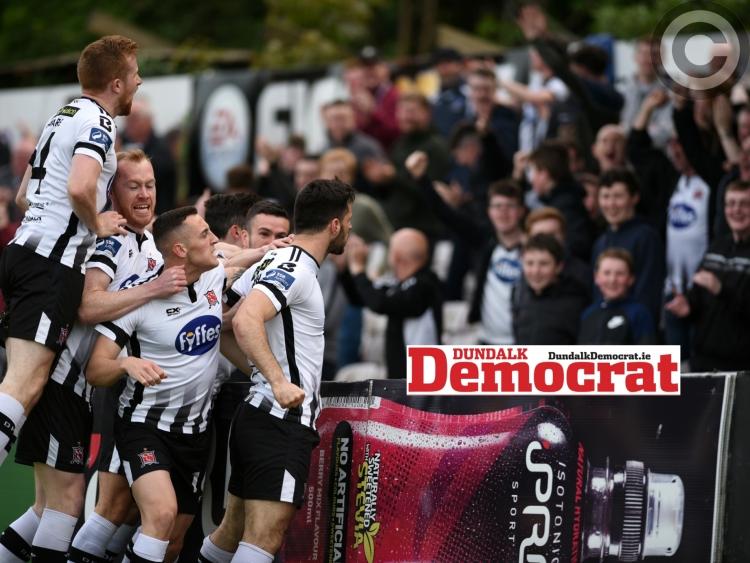 Dundalk FC stretched their unbeaten league record at Dalymount Park to nine games tonight with a 2-0 win over Bohemians in Phibsborough.

Patrick Hoban's 12th goal of the campaign after just four minutes preceded a second from the excellent Seán Hoare with seven minutes to play as the Lilywhites remained two-points clear of Cork City at the league's summit ahead of Monday's clash with Waterford at Oriel Park.

Stephen Kenny's side dominated for much of this affair with April's Player of the Month Michael Duffy and Jamie McGrath among those to catch the eye in attack. Hoare, who shifted out to right-back in place of George Poynton, to accommodate the return of Daniel Cleary from injury and suspension, was also impressive and provided the cross from which Duffy knocked into the path of Hoban who shot clinically past Bohs 'keeper Shane Supple to make it 1-0.

However, with Dundalk having passed up several openings to extend the gap, mainly via headed efforts by Duffy and Brian Gartland, Bohs were inches away from drawing level shortly before half-time when Chris Shields scrambled Dinny Corcoran's trickling effort off the line, despite the Jody Stand pleading with referee Paul McLaughlin to award the goal.

McLaughlin failed to endear himself to the home support, particularly during a first-half in which he awarded seven of the nine free-kicks to the visitors.

Bohs had another glorious opportunity in the early stages of the second-half when Dylan Watts could only lift his effort into the grasp of Gary Rogers as he bared down on the advancing custodian, having been picked out by Corcoran.

In saying that, Gartland, who missed narrowly with a header in the first-half, came very close with another nodded effort as his downward attempt from Duffy's corner bounced agonisingly over the 'bar. It was the first of a glut of chances for the Lilywhites, and Duffy especially who saw his free-kick glance the side-netting - with the away supporters momentarily reckoning it to have beaten Supple - before he clipped the top of the 'bar after diverting Hoare's delivery goalward.

The second goal was coming, one felt, and it arrived in scrappy circumstances as Hoare capped an impressive individual display by heading home the insurance goal after a spell of pinball inside the six-yard area. 2-0 and game over.

Their shortest away voyage of the season, Dundalk fans will travel down the M1 in buoyant mood.