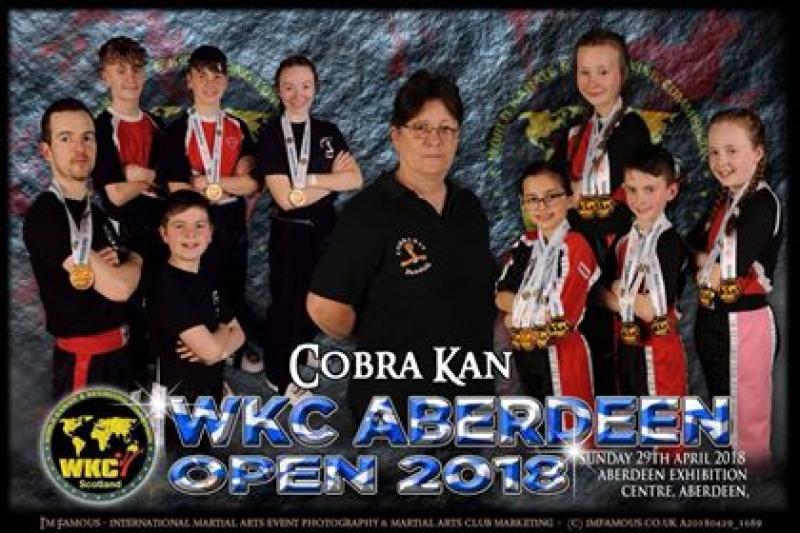 Cobra Kan's fine reputation was only enhanced at the Aberdeen Open recently.

Chief instructor Patricia McQuillan and nine students made the trek to Scotland and they were well rewarded for their efforts.

Up first was the dynamic McCabe duo of brother and sister, Liam and Lisa. Dedicated young students, they both faced incredibly tough opponents throughout the day. Lisa competed in the U12 points section at two weight categories. She fought -45kgs and won her four fights to achieve a gold medal. She then jumped up a weight to the -50 category and had two fights and won a bronze medal. Liam competed in four sections, which kept him very busy all day. He fought U10 -30kgs and -35kgs in both points and light contact. Liam had in fights in all of his sections and came home with one gold, two silver and one bronze medal.

Next up was another of Cobra Kan's young achievers, Meadhbh Duffy, who competed in six sections throughout the day. She had one kata section where she performed a well disciplined kata in order to receive a bronze medal. A high honour in a competition with such high standards. Meadhbh went on to compete in the U10 section for fighting. She received gold in light contact -30kgs, bronze in light contact -35kg, bronze in point fighting -30kgs, gold in point fighting -35kgs and gold in point fighting -40kgs. Meadhbh had a total of 12 fights throughout the day, she won 10 of them and bagged herself six medals, which is no easy feat.

Following Meadhbh, the club had the father-son fighting duo of Cian and Caolán O’Murchu. Cian fought in the men's -65kgpoint fighting section, reaching the semi-finals. Here, he fought hard,taking a bronze medal having fought hard. Caolan fought in his points section where he won his first fight and then lost his second fight to yet another Scottish fighter. He went on to fight in his light contact section where he left it all on the mats and fought his heart out, but , as luck would have it, it wasn’t Caolan’s day.

Sarah Gray started out her day with a convincing win in her age 13-14 point fighting -45kgs. She breezed through her fights winning by maximum score. Three fights through her section and she came out with a gold medal. Next up she decided to step up a weight into -50kgs and fought her way to the semi-finals and came out of it with a bronze medal. This is a huge encouragement to Sarah with her eyes on a gold medal at the upcoming World Championships.

Oisin Myles fought in the 13-14 point fighting -55kgs. Oisin went out onto the mats for two minutes, he fought hard and left it all on the mats. Unlucky for Oisin his opponent had the home crowd advantage. He fought a Scottish boy who had a lot of support and a lot of experience fighting at international level. Oisin had the skills and the heart in his fight but, unfortunately, didn't have enough scores in the end. He came away with a lot of experience and even more reasons to come home and work hard with his sights set on a medal at the World Championships.

Dominynkas Svedas had three fights in his light contact section and two in his points section. He fought his way into the semi-finals in both sections and came away with two bronze medals.

Rachel Ruth, one of Cobra Kan’s oldest members to travel, competed in the 15-17 point fighting -60kgs. Rachel fought hard through her first fight and managed to secure a win against a very tough Scottish girl. She fought in the semi-finals against another tough Scot and although Rachel used all her skills to produce the scores, Rachel took the fight to extra-time, where she lost narrowly. She took home a bronze medal to a club that is very proud of their fighter.

Cobra Kan is incredibly proud of all their fighters that travelled to this advance competition in Aberdeen. The club now have their sights set on the next World Championships which will be held in Dublin this October.

A huge congratulations to everyone who has made the national team from Cobra Kan and no doubt there will be many more success stories from the club throughout this year.