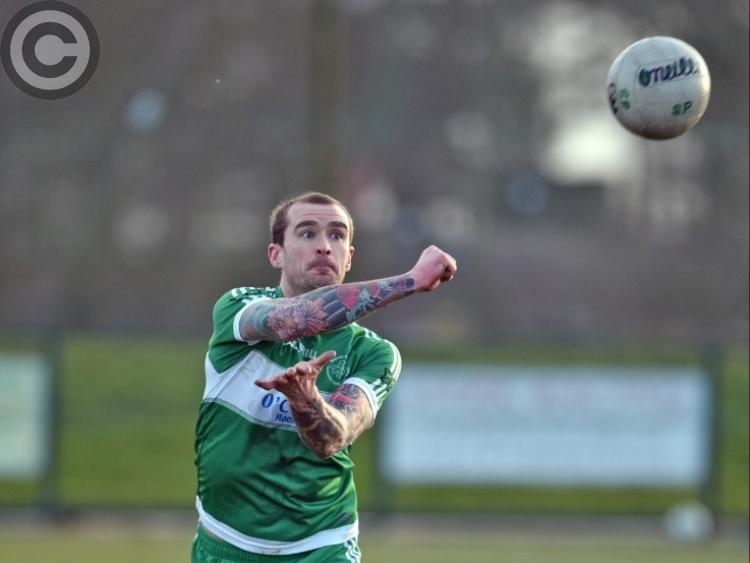 There were quite a number of candidates for the Man of the Match on Saturday night, but, in the end, it was Paddy Keenan who got the nod and the latest award caps a remarkable 18 months for the talented teenager.

The midfielder first came to prominence last year when playing a leading role on the Dundalk Colleges side that captured the prestigious Leinster Colleges title at Drogheda.

He continued on his winning ways in September when he captained Valley Rangers to only their second Minor Championship, and his displays with St. Patrick's earned him a call-up to the county squad.

Not content with playing a bit-part, Paddy forced his way into the team for the league campaign and had the honour of playing in the Leinster Championship at Croke Park.

Not only has he now a Senior Championship medal, but his performance illustrated that he is a player of maturity and undoubted ability, and is certain to have a big future in the game.

Along with midfield partner, Jim Holland, he got on top from the early stages, and aside from a brief spell coming towards the end of the first half, the duo were on top throughout.

Their work-rate, ball-winning and distribution ensured that most of the action was going towards the Mary's goal, and to cap it all, Keenan contributed three points.

One of the key areas for St. Patrick's was the improvement in defence. Although they battled well during the first game, a series of errors saw them gift St. Mary's a number of scores. This time they were not so generous and the changes made certainly made an impact.

Damien White drew the short straw when given the job of trying to curb Niall Sharkey's influence, but he rose to the task in admirable fashion and kept tabs on the dangerous corner-forward throughout.

Sharkey's importance to St. Mary's was illustrated with his 12-point haul (in the drawn game), and even though he was restricted on Saturday he still managed to claim six, and it would be impossible not to have sympathy for his failure to finish on the winning team.

His display was typical of the solid and disciplined performance throughout the defence that ensured St. Mary's - already working off a limited supply - were unable to get into their stride.

Colin Goss continued from where he left off on Sunday and his ability to keep Alan Doherty under wraps was crucial. The other main threat on the Ardee side, Darren Clarke, couldn't find the spark he produced when introduced in the drawn game, with Johnny Holland having a good outing.

Nerves certainly played a part in the first game and on Saturday Paudie Mallon was much more influential on the hard-working Mark Leavy, picking up a lot of loose ball and pushing his team forward.

Either side, Owen Zamboglou and Dessie Finnegan raised their games from the first outing and can be pleased with their efforts in keeping Gary Quinn and Eddie Gray on the periphery.

The Ardee attack enjoyed their best spell coming up to half-time and proved that they could cause problems, but with Robbie Keenan and Alan McKenny unable to get the better of opponents it was always going to be difficult to get sufficient scores.

Even the introduction of Dermot Duffy, who made an impact on Sunday, didn't have the desired effect.

On the other hand, the Pat's front six saw much more possession and made good use of it with quality passing, movement and most importantly, scores.

Ray Finnegan set the standard from the opening minutes, taking on the responsibility and contributing three early scores to give his side confidence. Darren Kirwan was also at the centre of the action once again, while Eamon Carroll's fine distribution set-up a number of opportunities.

Padraic Devane, who had the honour of leading the team in Seán White's absence, also worked hard throughout but will be disappointed not to have got on the scoresheet. He came up against a tough opponent in Brian Keenan, who battled to inspire his side.

Also impressing in the half-back line was Ronan Carroll, who recovered from a slow start to give his all throughout and even managed to kick over two points.

The St. Mary's full-back line were solid for most of the game with Paul Malone once again turning in a competent display.

However, they were caught napping for the crucial first goal when Connor was left unmarked to crash the ball home.

The corner-forward finished with an impressive 2-3 after being gifted a second goal, and overall saw much more of the action than in the drawn game. After being the hero of the first match, Shane Hynes wasn't able to make his mark and was replaced by Seán White who responded to the disappointment of being left on the bench by playing his part in the victory.

The captain made his most telling contribution with an excellent pass to create the space for Darren Kirwan to set-up the first goal.

Behind the St. Mary's defence, Peter Duffy, had little chance with the opening goal and although he will be disappointed with the second, it was not the losing of the game for his side.

His opposite number, Sean Connor, didn't have that much to deal with and while he won't be pleased at gifting Alan Doherty a first-half point, he had a solid outing.