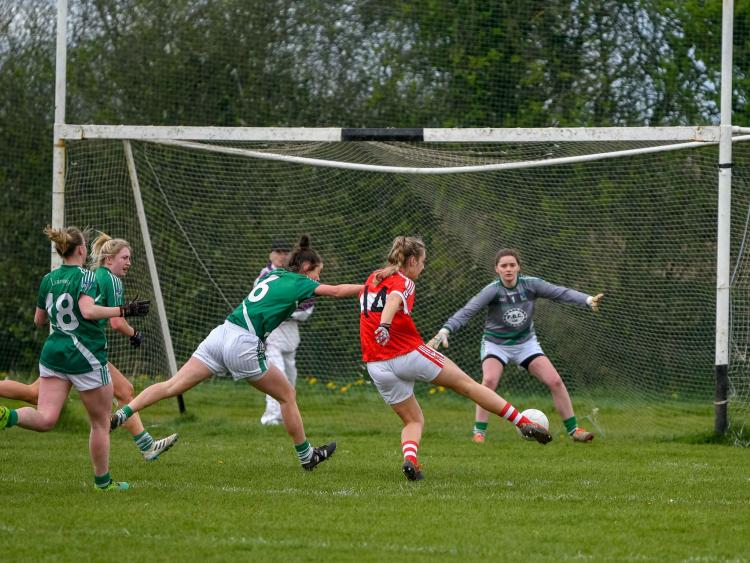 Kate Flood scores the only goal for Louth against Limerick this afternoon. (Pic: Warren Matthews)

Louth ladies put in a superb second half performance against Limerick in Portarlington on Sunday afternoon to qualify for the Division Four league final.

Captains Paula Murray and Kate Flood led by example, contributing 1-7 between them, as the Wee County set-up a final date with Wicklow.

However, they didn't get off to the best of starts against Limerick, who played in Division Three last season.

Trailing by three points, Flood opened Louth's account in the 11th minute before Lauren Boyle struck the first of her four points to reduce the gap to the minimum.

Murray's first score of the outing and another minor from Flood came in midst of three points from the Treaty County who extended their advantage to two before Flood's third of the half made it a one-point game at the interval; 0-6 to 0-5 in Limerick's favour.

However, Boyle and Aoife Russell raised white flags on the restart to ensure Louth led for the first time six minutes into the second half.

Level at 0-7 apiece, the Reds hit a purple patch, a run which ultimately won them the game. Following three successive points from Murray and Flood (2), the latter scored the match's only goal as Mícheál McKeown's charges raced into a six-point lead.

And from that point onwards, the outcome was never in question as they made their dominance count. Five of the final seven points would go the winners' way as Boyle (2), Michelle McMahon, Rebecca Carr and Susan Byrne registered towards the close.

Wicklow, who accounted for Antrim by 26 points in the other semi-final held at Inniskeen, await and how Louth would love to go one better than they did when they met the Garden County in Stabannon a few weeks ago.