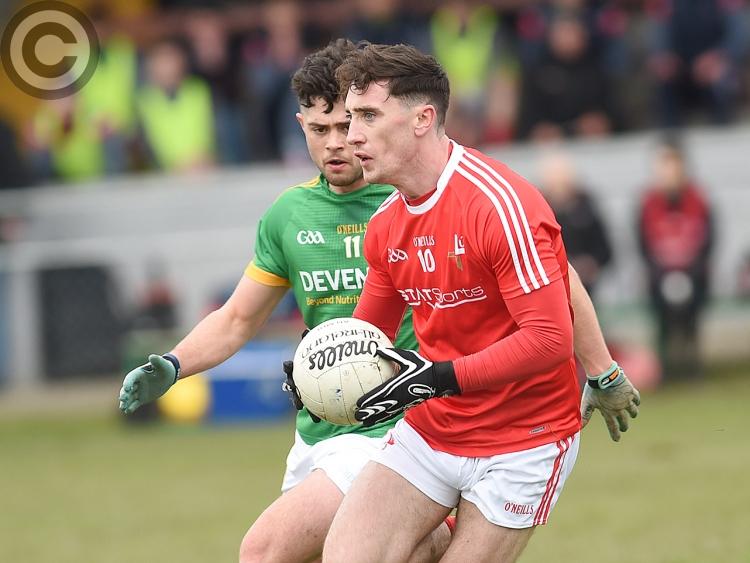 Derek Maguire became only the 24th player to reach a century of appearances for the Louth senior footballers during the recent league campaign.

After consultation with former manager Paddy Clarke,  it was determined that the Young Irelands man reached the milestone during the round two loss in Cavan and now sits on 105 caps having featured in each of the seven outings.

Maguire made his debut as a substitute under Eamonn McEneaney in 2009 during an O'Byrne Cup opener against UCD before making his first start a year later in the same competition when his uncle, Peter Fitzpatrick, was at the helm. Indeed, there is some significance to this as 14 of his first 17 games for the Reds were as a substitute and while his tag as a 'super sub' has lessened somewhat in recent years, his tally of 28 appearances off the bench puts him only six behind Darren Clarke's record of 34.

When asked to react to his achievement, Maguire, who has won an O'Byrne Cup and Division Three league with his county, said: “Obviously, my family is a huge GAA family and it's great to have the appearances, but, at the end of the day, have I much to show for it? I probably don’t have enough to show for it and I suppose I wish I had.

“Especially this year, where I did pass the 100 mark, I wish I had something more to celebrate rather than being relegated. It's bittersweet if I’m being honest.”

Having set-up Colm Judge for Louth's goal in the 1-15 to 2-10 Leinster semi-final win over Westmeath in 2010, Maguire ranks that game as a highlight in his almost decade-long career.

However, securing promotion from Division Three last year with victory over Tipperary is another of the 29-year-old’s personal favourites.

“The obvious highlight is 2010 when we beat Westmeath in the semi-final and I suppose the whole run-up to the Leinster final was great,” said Maguire.

“But, for me, one my highlights is last year against Tipperary. We were after getting hammered by Armagh the week before and nobody was really giving us a chance going to Tipperary. We were playing with the wind in the first half and things weren’t looking great, but, then, out of nowhere, this huge performance came.

"It was definitely one of my proudest moments in a Louth jersey and I know the likes of Adrian Reid and Pop (Pádraig Rath) felt the same, in a stadium (Semple Stadium) with such a rich history."

Strangely, Maguire is the only current Louth player to have reached double-figures in goal-scoring terms, with Jim McEneaney on nine and Ryan Burns a further two in arrears. His 10-68 has seen him bag six league goals, however, he is yet to strike a major in championship football with 0-15 being his return.

And, with the Leinster Championship first round against Carlow less than a month away, Maguire admits that it would be a nice place to get off the mark.

"Obviously, it would be nice to get a goal (against Carlow), especially if it's going to help the team to win a game."

Since 2001, 12 - including Maguire - players have surpassed the 100-appearance barrier, while team-mate Declan Byrne could well become the 25th overall to achieve the feat in the summer ahead with the St. Mochta's man currently sitting on 96.

Their numbers remain well short of Stephen Melia's record, however, with Maguire a full 72 games behind the legendary former John Mitchel's and St. Joseph's man.

Pipping Melia is not on Maguire's radar, though.

"The game has completely changed and it's not even something that I've been thinking about, to be honest.

"I'll just take it year-by-year because the training schedule for an inter-county footballer now is crazy at times. You're training six times a week sometimes and when you're trying to juggle a job and a lifestyle in there, it's not really possible.

"It's hard to know. It's definitely not something that I'll be thinking about passing," Maguire said.

Coincidentally, both Maguire and Byrne sit on 77 starts for their county.