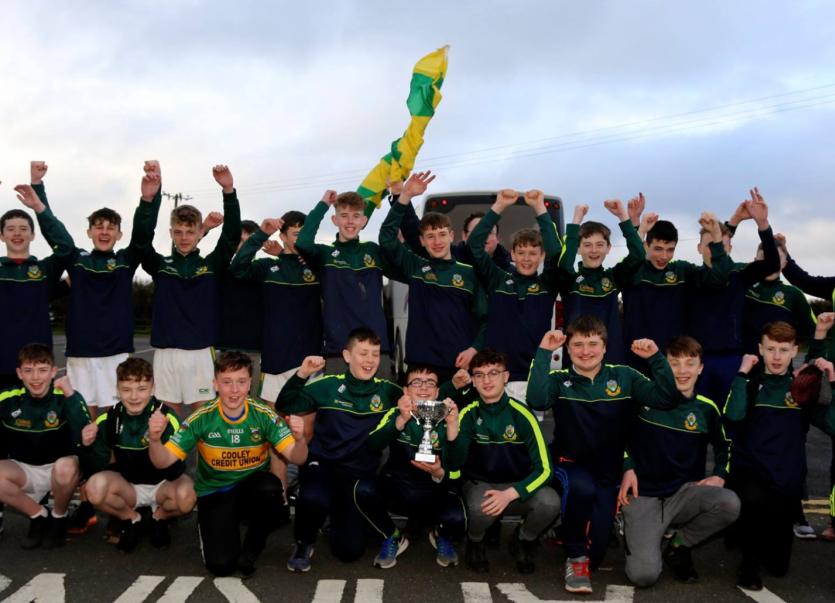 Playing with the aid of a stiff breeze, last year's Louth U14 Championship runners-up got the ideal start with the rampaging Callum O'Hanlon firing to the Moorefield net after less than a minute.

Building on the midfield dominance of Enda O'Neill and Cormac Malone, the peninsula side added further scores before Moorefield, whose senior side are Leinster club champions, came roaring back into the game with two quick points.

The combination were under severe pressure at this point and, was it not for a sensational goal-line block from Darragh Brady, they surely would have gone behind.

Things remained finely balanced during the rest of the half which finished with Cooley/Gaels holding a marginal lead of 1-4 to 0-6.

The second half was an epic affair with the teams swapping the lead regularly through the half. Well-organised at the back, with Cian Murphy and Colm Keenan and playing some excellent football on the break, Cooley/Gaels added points through Cian Connor, O'Neill and Malone.

A fine goal, again from Callum O'Hanlon, ten minutes from the end seemed to have sealed the victory for the Louth side, only for Moorefield to level matters once more with a series of excellent points.

As the game entered added time it seemed that extra time would be needed to separate the sides. However, Tommy McCarragher had other ideas. His movement and energy had tormented the Kildare side from the start, and it was another mazy run and fine point into the breeze that gave Cooley/Gaels the last minute victory.

This was a great victory for a team that contains outstanding players from both Cooley Kickhams and Cuchulainn Gaels. It was also appreciated that the chairperson of each club, Seán Marks and Roddy McQuaid, were present to witness this historic event.

Lastly, the hospitality of the Moorefield club and the noisy reception that greeted the arrival of the players home to Cooley certainly added to the occasion.