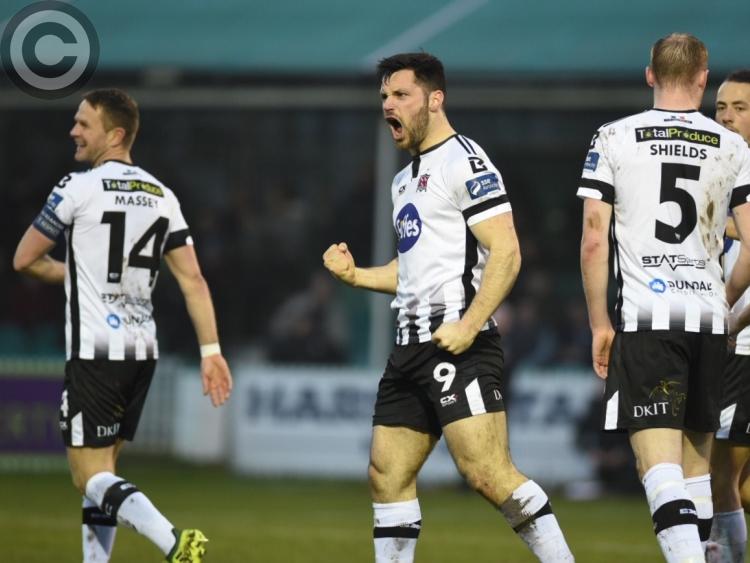 Dundalk FC registered their seventh league win of the season at the Carlisle Grounds tonight, claiming a 2-0 victory over bottom-of-the-table Bray Wanderers.

Patrick Hoban's sixth of the campaign and an injury-time goal from John Mountney were enough to settle a poor, if competitive, struggle as The Lilywhites ensured themselves sole ownership of the league's summit after Waterford's defeat in Derry.

Despite fielding the same line-up as the one that defeated Shamrock Rovers seven days earlier, and having enjoyed a relatively bright start, chances were limited for the winners throughout with Hoban's effort being their only shot on target before Mountney's finish four minutes into second-half stoppage time.

Early on, the Wicklow side ought to have moved in front when striker Aaron Greene rolled the ball wide of the upright having evaded both Dundalk centre-halves, Daniel Cleary and Stephen Folan, inside the 18-yard box.

Indeed, Hoban's goal came out of nowhere as a breaking ball from Krisztián Adorján's corner was clinically half-volleyed to the bottom corner by the striker - who also scored on his last visit to Bray in October 2014.

The goal - on 26 minutes - was expected to be the beginning of a Dundalk onslaught, but this was far from the case as 'keeper Gabriel Sava was thrice forced into action as Wanderers enjoyed their best spell of the match just prior to the break. Saves from strong Greene and Gary McCabe shots came either side of a crucial intervention after Paul O'Conor had got behind the visiting defence.

An improved second half was anticipated from Dundalk with their brief being to put the basement dwellers out of sight at the earliest possible juncture. But this didn't materialise and, in fact, had Wanderers found a breakthrough - despite their limited offensive threat - credible arguments could be made that it was deserved.

While much of the play involved the midfielders, Bray held the territorial advantage and had McCabe's speculative 50-yard shot been an inch higher, the back-tracking Sava would have been beaten. As it turned out, the 'keeper was able to palm to safety as The Lilywhites breathed a huge sigh of relief.

That proved to be the closest Bray would come, even if they had Dundalk under the cosh, as their remaining efforts flew harmlessly off target before Mountney sealed the win by dispatching Michael Duffy's cross to the roof of the net.

Tonight's win is Kenny's sixth at the seaside venue at the helm of the table toppers.