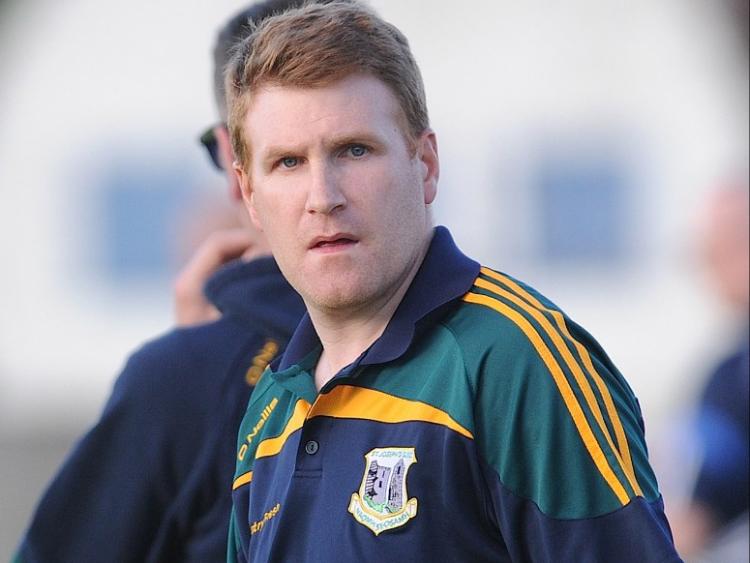 Weather conditions were ideal. The sun rose very early in the day, shone brightly and refused to go home. As for the breeze; it wasn't strong enough to be an intrusion, but a comfort nonetheless to moistened brows.

Páirc Mhuire looked immaculate. Whoever cut the grass left no blade longer than another, while the lines looked as if they had been measured with a ruler. And Charlie McAlister's flags of many colours danced merrily.

The perfect setting for a senior final, or, perhaps, for a team that has only known heartbreak on an occasion like this to finally come good?

Hail St. Joseph's, from the Parish of Darver and Dromiskin. Having failed twice in the past on Louth football's biggest day, beaten by St. Fechin's in the GAA's Centenary Year, 1984, and by Stabannon Parnells a decade later, the team known popularly as 'The Joes' have at last edged their way on to the Roll of Honour with a thoroughly convincing win over the raging hot favourites, the team that beat them in 1994, Stabannon Parnells.

CONVINCING
Just how convincing this historic win was can be gauged from the scoreline, 2-11 to 1-8. If there's any arguing with that, you can take it for sure, it won't be coming from Stabannon.

Good champions in 1991 and again two years ago, Stabannon were quick to acknowledge the merit of Joes' great win. We spotted one of their most prominent players going to some length to congratulate each of the victorious team, and though the presentation ceremony went on much longer than usual - which was perfectly understandable - Parnells, to a man, stood their ground. Great champions, great losers.

They say the marriage which led to St. Joseph's coming into the world was stormy in its early years. The Unknowns had fought out of the Dromiskin end of the parish for many years, while Volunteers were the Darver representatives. Bringing the two together in the early sixties required all of Father Brendan O'Neill's tact, while we suspect more than a few players were needed to preserve the union.

But survive it did - and while there have been many fine wins in the intervening thirty-five years, such as the JFC victory of 1970 and a couple of Intermediate Championship successes in the meantime, nothing would compare with Sunday's.

MISSED OUT ON REPLAY
This is was Joes have been threatening to do over the past couple of years. They went close to beating Stabannon in '94, only just missing out on a replay, while last year's semi-final clash with St. Mary's also went to two matches.

Patience has got its reward, and so, too, has good football. It's been said often in these pages that Joes are about the most attractive team there's been in the county since Newtown Blues were at their peak. Some agreed, but others felt the Cluskey Park men were naive, that when it came to the crunch, there'd be no room for niceties.

There is no more important game than a county final, while Stabannon Parnells don't entertain the faint-hearted, nor do they show any mercy for those among the opposition who are. The ultimate test, therefore, for Joes.

FLYING COLOURS
That they came through with flying colours is beyond question. Led in the early stages of the second half by two points, Joes didn't begin their match-winning break until ten minutes from time. But once into their stride, they were devastating, young legs running faster than older ones, with scores to match the best.

And who better than Man of the match, Ollie McDonnell, to get the really important strike. This was the day on which the red-haired dynamo swept aside all doubt about his ability to act on the big day. That may have been said before, but needs to be said again. The Joes forward is no different than any other footballer, good or mediocre, in that he can have an off-day. The difference is, his bad days are unfairly magnified.

A great day for McDonnell, and for Enda McKeown, and for Aidan Gorham, and for Stephen Melia, and for Garret Doyle, and for just about everyone who has ever worn the tricolour, either as a jersey or rosette. The scene at the presentation ceremony was the most colourful there's been in years, while the celebrations which followed were as hectic as you'd expect of an outfit rejoicing in such a magnificent victory.

Yes, there was dancing at the crossroads, the one in the village close to Matt Ginnitty's. Joes people were joined by others from neighbouring and distant clubs, confirming that not for a long time has there been such a popular winner.

Not among the revellers, however, was the bould Nicko. 'The Boss', as Nicky McCartney is known to just about everyone is recovering from an operation. He was visited, however, in the Louth Co. Hospital on Sunday night, and, yes, that famous sombrero of his was perched close to the bed.

His message to all who called: Have no fear, I'll be fit and ready for the Leinster Club Championship

NOT A CONTENDER
Togged out on Sunday along with others on the bench, John Fox may be a contender for the clash with either the Wexford or Kilkenny champions. 'Foxy' shipped an injury in a league match soon after Joes' first-round defeat of Geraldines, and was forced to miss the remainder of the championship. Cruel luck this on one who had been very much a part of the team's emergence in recent years

Enda McKeown enters the record-books as the first Joes player to hoist the Joe Ward Cup. No-one, but no-one, will begrudge this young man the honour. Indeed, there are many who'd be delighted it was he, in particular, to whom the honour fell.

And what of Aidan Gorham, the team manager? As a player, Aidan shared in the acute disappointment of that defeat to Fechin's twelve years ago. Now victory comes to him in another capacity. He shared selection duties with Paddy Farrell and the redoubtable Jimmy McDonnell, a Darver volunteer, but remembered best for his exploits in the red jersey.

Stephen Melia's been with Joes as a trainer for the past couple of years. He recommended qualified coach, Garret Doyle, to the club a few months back, having worked under him during Balbriggan O'Dwyers' championship campaign.

What price Doyle being back again next year, and, perhaps, Melia forging an ever closer link with Cluskey Park?

TEST OF CHARACTER
Stabannon now face a fierce test of character. Don't be against them passing it. Deflated by the championship defeat by St. Patrick's twelve months ago, they bounced back to take both league titles, beating St. Joseph's, incidentally, in the final of one of them, the O'Donnell Cup.

They have the chance to do the same again this year. They're in the final of the ACC Cup - in which they play Clan na Gael - and look good to make the knockout stages of the O'Donnell Cup.

Parnells could have been more than a point ahead at the interval in Sunday's match, but they had no real answer to St. Josephs' pace in the final quarter. Most of the damage to their prospects was done around the middle of the field, however.

The Reilly brothers didn't dominate as expected, while at centre-half, John Donaldson suffered more than the others in trying to cope with skilful, and above all, well-schooled forwards.